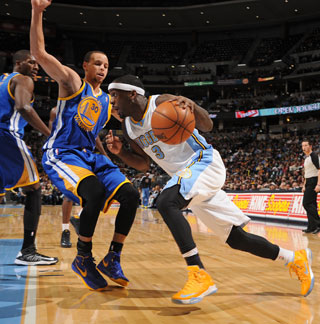 The NBA Playoffs are known for slowed down half court offense and short benches, right? Well, throw all of that out the window for the Denver Nuggets vs Golden State Warriors series. Both of these teams like to run and they both average north of 100 points per game. They should break out the ABA ball, afros and short shorts for this matchup as it is going to be a track meet on par with old school pro ball.

Denver is coming off of their best regular season ever and they won the regular-season series against the Warriors 3-1, so they are naturally the favorite. George Karl’s team likes to run and abuse opponents in the paint. GSW on the other hand relies on the three-point accuracy of Jarrett Jack, Klay Thompson and long-range single season record holder Stephen Curry.

The difference in offensive philosophy essentially decided the outcome of their regular-season matchups, as Denver was +46 free-throw attempts over the four games. If those games are any indication of the Warriors will have to get to the line more often to make the Playoff series competitive.

Now let’s get to the matchups:

Denver may not have a typical go-to guy, but this is Ty Lawson’s team. He’s clutch, makes good decisions with the ball and runs the high-paced offense with precision. Stephen Curry is clearly the best player on GSW and arguably the best player on the floor in this series. He and Lawson have similar assist numbers, while Curry is a far more efficient and effective scorer and rebounder. At a recent practice Ty Lawson said the way to stop Stephen Curry is to “just try and make him drive. Watching tape, he really wants to get space to shoot. I think his last option is to drive. Get him to drive and not let him get in a rhythm shooting the ball.” All of that sounds good, but Curry can hit from anywhere on the floor and shoots 89.4 percent from the charity stripe.

The other AI went from being the man in Philly to a cog in the system in Denver, and it’s worked out for him in a major way. Denver’s system plays to his strength as a guy who doesn’t want the ball all the time but does want to lock down the other team’s best perimeter guy. Iggy’s shot isn’t as good as Thompson’s, but he trumps him in rebounding, passing and defense. Klay is a second-year player and he plays like it at times, making mistakes that have cost his team victories in the past.

Danilo Gallinari’s injury is a big blow to the Nuggets—his size, shot and passing ability would have given Harrison Barnes fits. Chandler is no slouch; he’s played well since Gallinari went out. His shot has improved, thanks to Karl’s system and he has the edge of experience. Harrison Barnes seems to suffer from the same mental block that plagued him at UNC. It’s like he doesn’t know how athletic he really is. I expect the same inconsistency out of him that frequently calls for Mark Jackson to bench him in the forth quarter.

The Manimal is a media favorite for his motor and exciting defensive play, but let’s not forget that Lee averaged nearly 23 ppg on him in the regular season. Add to that, the fact that Faried’s ankle is injured and he’s most likely going to miss the first game of the series. A lot of Denver’s success is predicated on Faried leading the fast break. His speed will most likely be negated by the injury. With Lee, you get what you get: a double-double and little-to-no defense. If Faried were healthy, this would be a compelling matchup, but he’s not so….

Both teams play their backup centers for major minutes, so this matchup really boils down to Bogut/Ezili/sometimes Biedrins vs Koufos/McGee. Bogut wasn’t present for many of the games this season vs Denver and his presence, coupled with Manimal’s injury, could be a game-changer for Denver’s point in the paint dominance. Ezili is young and active on defense, but he’s just about inept on offense save for put backs. Biedrins hasn’t been the same since Don Nelson took his confidence. On the flipside Koufos and McGee are superior offensively for sure. McGee’s unpredictable bat shit crazy behavior could be an issue.

Prediction: This series is going to be one of the most entertaining ones we’ve seen in the Playoffs in quite sometime. Not because of a huge upset (a la Dallas beating Miami in the Finals in 2011), but because both teams are going to play fast-paced, high-energy basketball. If Galinari wasn’t out and the Manimal wasn’t hobbled, I could see Denver running away with the series in 5 or 6 but ifs don’t matter come Playoff time. The Andre Miller vs Jack backup PG battle will be pivotal to the second unit as will Carl Landry vs former Warrior Anthony Randolph. Stephen Curry has been unstoppable in the second half of the season and being guarded by a guy who is five inches shorter than him will only aid in that dominance. George Karl is a mastermind and if any coach can find a way to overcome personnel losses it’s he. But Denver won’t have the frontcourt depth to continue to bully in the paint over the course of a seven-game series or to stop the Warriors from penetrating and kicking out to wide open wings.