Oden Can’t Blog for Free and His Tonsils Hurt 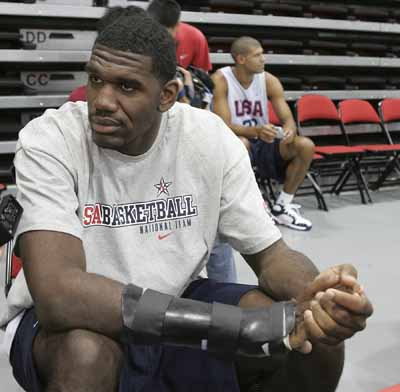 I stayed in and watched the Home Run Derby last night. Man, talk about boring. I actually fell asleep midway through the damn thing. I can’t think of a less thrilling sports event than the long ball contest right now.

Sure, the NBA’s All-Star Weekend isn’t perfect — can we hurry up and replace the Skills Challenge with a game of HORSE, please? — but at least the NBA makes an attempt to be entertaining. I’m not exactly sure what MLB needs to do in order to improve its showcase event, but a good place to start would probably be in the broadcast booth. Good thing the mute button exists.

(Regardless, I’m looking forward to the All-Star Game tonight. If we’re lucky, it’ll end in a tie.)

Onto the NBA news & notes:

-Greg Oden is blogging about his Summer League adventures, and wouldn’t you know it, he’s mad that his hotel doesn’t have free Internet access.

Sorry I haven’t been blogging for a couple of days, but I’m pretty busy. With the summer league and all these interviews and practices, it’s kind of hard to find time. It doesn’t help that my hotel does not have free internet access. I hate that.

-Um, about that KG to Dallas rumor: According to Donnie Nelson, it ain’t happening.

Will Garnett wind up in a Mavericks uniform?

-Channing Frye is a pretty funny guy. When asked about what he expects to contribute in Portland, he dropped the best quote I’ve seen all summer (via: FanHouse):

“I bring everything…a little personality, a little leadership, a little shooting, a little defense. I’m a buffet of goodness.”

-Scary situation for Antoine Walker last night: He was robbed at gunpoint. From the Associated Press:

“He’s OK,” Walker’s agent Mark Bartelstein said. “There was a robbery. It’s a scary thing. It’s a terrible thing. He’s trying to get himself back together. Police are there and he’s getting it taken care of.”

Not a whole lot of details in the report, but hopefully, ‘Toine and his family are OK.

-Injury update: Greg Oden might not see any more Summer League action. Apparently, his tonsils are killing him.

“I can’t even tell you … it just hurts,” Oden said “Right now, it’s more of a thing that they are so big, that when I’m running up and down the court, it’s hard for me to breathe. I can’t get any air in there.”

The worst thing about this is that if Oden has a tonsillectomy this week, he’s likely to miss the highly anticipated game against Durant and the Sonics on Sunday.