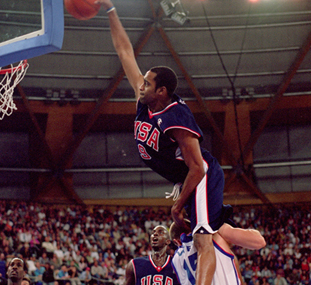 Old School Fri-day. With a three-day weekend coming up. Team USA, the squad built on young multi-millionaire superstars sacrificing their individual numbers for the common good of victory (VICTORY!), has gone down in flames, although this time it took a little bit longer than usual. Make all the jokes you want. Call him LeBronze. Say the closest that Carmelo will get to gold is being a nugget. Blame Kobe or Coach K for being Kobe and Coach K. There’s plenty of time to get into what went wrong, but this is Old School Friday, when we look back to the past and think about those good ‘ol days.

The original Dream Team. Some call it the greatest team ever assembled, and they are right. Chuck Daly was the coach and he never called a timeout during the run. No team will ever live up to their standard, and outside of a Barkley elbow or inflammatory statement or two, they won it with class all the way. You know the names of the players and how great they all were. Moving on.

The 1994 World Championship team, what you could call Dream Team II. America dominated again, but as for the classy part, well… here’s a look at the roster:

These guys were all villains at the time cause of their swagger. And by swagger, I mean guys grabbing themselves and posing after every dunk. I remember watching one game that the U.S. won by 40 or so, and Shaq cherry-picked on the last play and threw the ball off the backboard to himself and tried to tear down the rim to end the game. It was very much an NBA Street vol. 2 moment. Reggie hadn’t become the old statesman and ambassador of the game yet, and was still the guy that would hit a three to beat your team, then take bows at center court and live off the booing. Shaq was a rapper.
But look who else was on this team:

Okay, so they also had maybe three of the classiest players ever. Now that’s balance! Oh and they also had Thunder Dan, Steve Smith, and Los Angeles Clipper Dominique Wilkins. Isiah Thomas and Tim Hardaway were both injured and didn’t play.

The closest game was the opener against Spain, which was a 115-100 win. The rest of the scores were all blowouts. My greatest memory of watching them that summer was McDonalds giving away free huge plastic cups and I would make milkshakes in my Derrick Coleman cup. I loved this team, and I didn’t see why everyone was getting so worked up about guys showing off after dunks. I was in high school at the time, and I cared more about rehearsing touchdown dances for my street football games than almost anything else. This was the team for me.

The third installment was for the ’96 Olympics in Atlanta. Barkley threw some guy out of a window or something, and the NBA was in it’s awkward oh my God let’s promote every player in the league as the next Michael Jordan phase (Maybe they’re still in that phase?). The roster had some recycled players from Team USAs of the past: Barkley, Stockton, Malone, Reggie, Shaq, Pippen, and David Robinson. The new guys were Penny, Grant Hill, Gary Payton, Mitch Richmond, and U.S. citizen Hakeem Olajuwon. No close games, and they were led by coach Lenny Wilkens to that 8-0 record and the gold. This started getting boring we were so far ahead of the game.

In 1998, there was the matter of the NBA lockout, so no current NBA players were on the team, and the U.S. came in third at the World Basketball Championships. Brad Miller was on that team and he would go on to become the best NBA player on the squad. Where was it played? Greece. Since this is my Old School Friday look back to happier times, I’m skipping over this one.

2000 came, and this would be the last gasp of American basketball greatness. Many of the best American players were too tired from going deep in the playoffs, so the team that went was KG, Vince, Kidd, Shareef, Vin Baker, Alan Houston, Tim Hardaway, Antonio McDyess, Mourning, Payton, and Steve Smith, led by Rudy T. Only five of those players were even good enough to make the All-NBA third team. Still, most of the wins were blowouts. Lithuainia almost beat the U.S. twice, with America surviving a Sarunas Jasikevicius desperation three in the semi-final. America won the gold with another 8-0 run, and in a game against France, Vince Carter pulled off the greatest in-game dunk over another player ever that most of us have ever seen.

The Vince dunk has become what American basketball is. We don’t need no passing or shooting or coaching or play calling or fundamentals or defense. If there’s a seven footer standing near the basket, just jump over him and yell when you land.

And that was the last time the United States of America would compete internationally in basketball, much like the last shot of Michael Jordan’s career won the Finals for the Chicago Bulls, the only professional team he ever played for. 2002 in Indianapolis, 2004 in Athens, and last night/this morning never happened.

That’s my trip down NBA player USA basketball memory lane. How about everyone shares some memories of those great teams of the past and agrees to never speak of anything since the year 2000. Thanks.