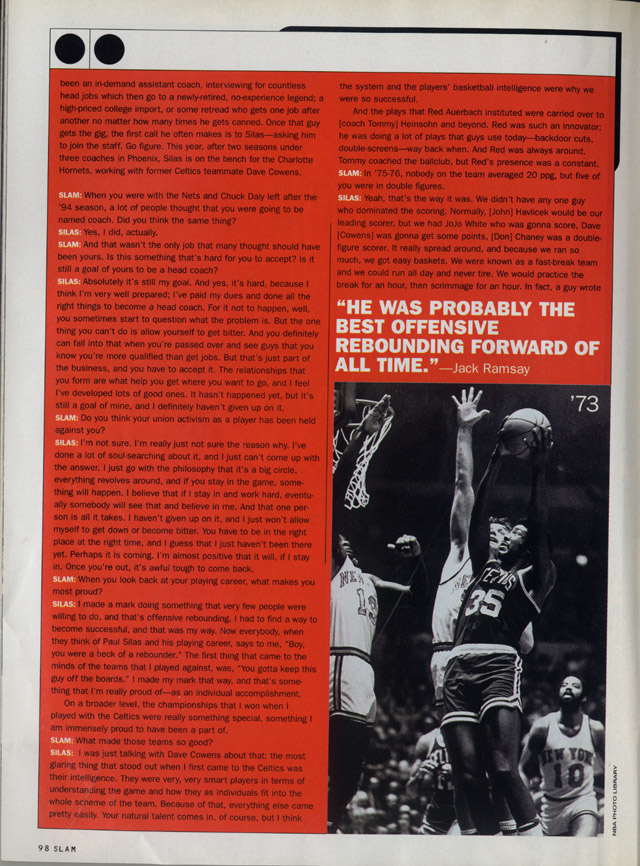 Paul Silas was recently named interim head coach of the Charlotte Bobcats. So it only makes sense to take a trip down memory lane and park at his interview from SLAM 26. In this feature from 1998, Silas discussed being overlooked for multiple head coaching jobs, and how he attacked the glass during his NBA career.–Ed.

Paul Silas was the sort of NBA player who’s easy to overlook. He never scored all that many points, averaging 9.4 for his career. A great defensive player, perennially making first- or second team all-defensive teams, he wasn’t a big shot blocker. He was a tough, physical, in-the-trenches banger, the king od guy who put his chest into his opponent early and often, whose tenacity never let up. The kind of guy you hate to have guarding you. But there’s not a lot of glamour in driving opponents nuts, or in clawing, scratching, positioning–and thinking–yourself into being one of the game’s all-time greatest rebounders. Silas averaged 9.9 rpg for his career, and currently ranks 14th on the all-time list with 12,357.

“He was probably the best offensive rebounding forward of all-time,” recalls Jack Ramsay, who coached against Silas for years and is now and ESPN analyst.

“He was an absolutely incredible offensive rebounder–especially for a guy who really didn’t jump that well. He got great postioning every time, and he was such a tough competitor. He was always around the ball, especially when a game was on the line.”

This knack of Silas’ may be why almost every team he joined throughout a 16-year career saw its record improve. He only missed the playoffs twice–on teams which won 48 and 49 games–and today wears three championship rings, won with the Celtics in ’74 and ’76 and the Sonics in ’79.

“He was a prototypical team guy,” Ramsay recalls. “You have to have players like him to be successful. They may be overlooked by some, but not by coaches. He was a very highly-regarded player by coaches; everyone would have liked to have him.”

So Silas would seem to be the perfect candidate to lead a team. But since coaching the woeful Clippers for three woeful years, ’80-83, he has never gotten a second chance. Instead, he’s been an in demand assistant coach, interviewing for countless head jobs which then go to a newly-retired, no-experience legend; a high-priced college import, or somoe retread who gets one job after another no how many times he gets canned. Once that guy gets the gig, the first call he often makes is to Silas–asking him to join the staff. Go figure. This year, after two seasons under three coaches in Phoenix, Silas is on the bench for the Charlotte Hornets, working with former Celtics teammate Dave Cowens.

SLAM: When you were with the Nets and Chuck Daly left after the ’94 season, a lot of people thought that you were going to be named coach. Did you think the same thing?

SILAS: Yes, I did, actually.

SLAM: And that wasn’t the only job that many thought should have been yours. Is this something that’s hard for you to accept? Is it still a goal of yours to be a head coach?

SILAS: Absolutely it’s still my goal. And yes, it’s hard, because I think I’m very well prepared; I’ve paid my dues and done all the right things to become a head coach. For it not to happen, well, you sometimes start to question what the problem is. But the one thing you can’t do is allow yourself to get bitter. And you definitely can fall into that when you’re passed over and see guys that you know you’re more qualified than get jobs. But that’s just the part of the business, and you have to accept it. The relationships that you form are what help you get where you want to go, and I feel I’ve developed lots of good ones. It hasn’t happened yet, but it’s still a goal of mine, and I definitely haven’t given up on it.

SLAM: Do you think your union activism as a player has been held against you?

SILAS: I’m not sure. I’m really just not sure the reason why. I’ve done a lot of soul-searching about it, and I just can’t come up with the answer. I just go with the philosophy that it’s a big circle, everything revolves around, and if you stay in the game, something will happen. I believe that if I stay in and work hard, eventually somebody will see that and believe in me. And that one person is all it takes. I haven’t given up on it, and i just won’t allow myself to get down or become bitter. You have to be int he right place at the right time, and I guess that I just haven’t been there yet. Perhaps it is coming. I’m almost positive that it will, if I stay in. Once you’re out, it’s awful tough to come back.

SLAM: When you look back at your playing career, what makes you most proud?

On a broader level, the championships that I won when I played with the Celtics were really something special, something I am immensely proud to have been a part of.

SLAM: What made those teams so good?

SILAS: I was just talking with Dave Cowens about that: the most glaring thing that stood out when I first came to the Celtics was their intelligence. They were very, very smart players in terms of understanding the game and how they as individuals fit into the whole scheme of the team. Because of that, everything else came pretty easily. Your natural talent comes in, of course, but I think the system and the players’ basketball intelligence were why we were so successful.

And the plays that Red Auerbach instituted were carried over to [coach Tommy] Heinsohn and beyond. Red was such and innovator; he was doing a lot of plays that guys use today–backdoor cuts, double-screens—way back when. And Red was always around, Tommy coached the ballclub, but Red’s presence was a constant.

SILAS: Yeah, that’s the way it was. We didn’t have any one guy who dominated the scoring. Normally, [John] Havlicek would be our leading scorer, but we had JoJo White who was gonna score, Dave [Cowens] was gonna get some points, [Don] Chaney was a double-figure scorer. It really spread around, and because we ran so much, we got easy baskets. We were known as a fast-break team and we could run all day and never tire. We would practice the break for an hour, then scrimmage for an hour. In fact, a guy wrote a book on us after the first year I was there, called Don’t They Ever Stop Running? Well, we didn’t and it was a great way to play basketball. A lot of fun to play, and a lot of fun to watch.