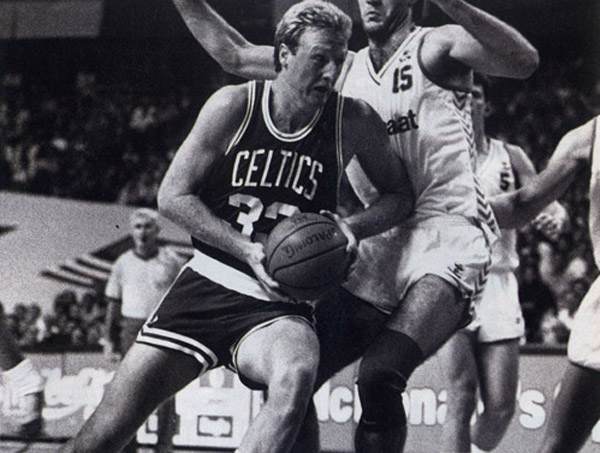 Larry Bird changed the game, and gathered a few haters while he was at it. In this feature from SLAM 28, Scoop Jackson gave his account on what Bird meant to him and the League. Surely one of the most polarizing players in NBA history, regardless of race, you could not doubt Bird’s skills. Doing so will only make you look foolish. —Ed.

My life with Larry Bird is different from my life with DOC, DT or anyone else. Somewhat vicarious. I’ve had these “experiences” since ’78 that connect us. Sports Illustrated had this picture of his jump shot in motion across a two-page spread. You could see the release, the rotation of the ball, the finish. For some reason, that stuck with me. Carl Nicks, a ballplayer from Chicago who ran with Bird, used to come home from Indiana State and talk madness about this white boy. He’d tell stories that were hard to believe. At times, he claimed that Larry Bird was the best basketball player he’d ever seen, and a lot of people thought Carl was on crack. But I used to listen, because the more Carl talked, the more my mind went back to that picture.

The last Saturday of March, ’79, I had a basketball game to play at the neighborhood Y. It was for the league championship, but a lot of us didn’t want to go, because DePaul was playing in the Final Four that afternoon. They were playing Indiana State. Every young brotha in Chi was trying to see Mark Aguirre do his thang, but many simply wanted to see if Carl Nicks was telling the truth. Kids on both teams begged for the game to be postponed until after the DePaul-I. State game, but the Y wasn’t having it.

Somewhere in the middle of the fourth quarter, someone brought a television from the Y’s office and plugged it into an outlet in the corner of the gym. He was yelling as he ran across the court with the TV, “DePaul is losing! DePaul is losing!” As he hooked the 13-inch black-and-white up, the stands emptied and the game stopped. About 100 people piled on top of each another—myself included—to watch the rest of DePaul’s season. For some reason, we couldn’t imagine Mark Aguirre losing; it was incomprehensible to us. We couldn’t grasp it until Billy Packer (who earlier that had said publicly that Bird was overrated) tossed out Larry Bird’s stats for the game. Bird had only missed one shot the whole game and scored 37 points.

Too depressed to finish the game, many of the players just left. As did I. I hustled home, found that Sports Illustrated, cut that photo of Bird out and put it on my bedroom wall.

The telephone rings. It’s ’75, and Georgia Bird is at home tending to the regular business of running a house: barely being able to make ends meet, trying to get bills paid, waiting on tables to keep food in the fridge and a family together. Her husband is calling home to tell her he loves her, but Joe Bird has a shotgun in his hands. The next sound Georgia Bird hears is the death of her husband.

Larry Bird was 18 years old when his father committed suicide. Throughout his career, it was rarely discussed, which is as it should have been. Bird being able to handle his father’s suicide privately doesn’t mean that it didn’t have the same effect on his life that Michael Jordan’s father’s death had on his. Bird said he “wandered around for a week numb” afterwards. At times, the “numbness” returns, and Bird deals with it. Privately. It is part of what shapes Bird into the man that he has become. Quiet, somewhat removed, but open, honest and cordial.

He grew up broke. Couldn’t pay attention, could change his mind. Broke. “Indiana poor,” as people in Gary used to say. He knew he could play basketball, but money limited him to where he could show it. A year before his father died, he tried Indiana University. Bobby Knight. After one month, Bird came home and did the JuCo thing for a minute, but that didn’t work either. Understanding the fam’s need for some financial structure, Bird came back to French Lick to hustle as a garbage collector.

One year later, Bird looked around and realized that, as much love as he had for his father, he couldn’t be like him in some ways. He could not be stuck in a town of 2,106 people and not attempt to take a chance on life. Like many “brothas” surrrounded by the concrete and cages of the pj’s, Bird needed basketball to get out of his “ghetto.” Make his Mom’s life better. The escape. The way out. He enrolled at Indiana State University in Terre Haute and did two things: He got settled, then he got busy.

“The Only Great White Hope” is what he was dubbed. He hated it. He understood it, but he still hated it. For the next four or five years, Larry Bird built a basketball resume matched by only a small, small number. He was becoming black America’s worst nightmare: A white boy with game.

It’s ’84. Doing an early celebration of birthday No. 21. Drunk, I left an after-class party to get back to the crib and watch an early-season meeting between the Boston Celtics and the Philly Seven-Sixers (ebonics). Dr. J v. Larry Bird. The Sporting News called the Celtics-Sixers rivalry the best in the history of sports, and with me lovin’ Doc and not lovin’ Bird, there was nothing more important in my life at that time.

That night, I watched Larry Bird play as if he were possessed. I was so shook watching him play, I got sober. It was unreal. In less than 30 minutes, he dropped 42 points on Doc, talkin’ shit the whole time. I don’t know if it was the performance or something he said, but Doc lost it and a fight broke out. Julius and Larry had each other by the throats. I sat on the edge of my bed for two hours after that game–in silence. I couldn’t believe what Bird had done. I couldn’t believe Larry Bird was that good and that arrogant. He verbalized it, and he backed it up, Ali-style. And did it on Doc. My girlfriend came by to console me; she continuously asked if I was all right. I never answered, because I knew that from that moment on, I had to not only give Larry Bird his… I had to like him.

In the hallway of the Hyatt Regency in Chicago, during the ’88 All-Star weekend, I met Larry Bird. I stuck out my hand, “Hey Larry.”

“How ya doin’?” he answered with his almost-down-South twang. My partner Biskit did the same thing; Larry said the same thing. Later on that day, we watched Bird put on a shooting display from the Gods. He won the three-point shoot-out (again), but it was the way he did it that left us in awe. He never took off his warm-up jacket! That, and his raising that one finger immediately as the ball left his hand on the last shot was one of the greatest displays of vanity I’d ever seen. I’ll admit this now (and my cousin Dre will have my back, because he was there too), Larry Bird’s performance that day was better than Jordan’s or Dominique’s.

The King and I. Understand before reading this that I am a Bernard King fan. The season after he “averaged” 50 against Detroit and went head-up against Gang Green (the Celtics) and took them to seven games, BK john-blazed the League by averaging almost 33 a game. Four points better than the closest challenger. But that challenger did more than just score–he kinda did a lot more. That challenger got the MVP over Bernard that year. I screamed racism.

Of course, Larry Bird was that challenger. And for the first time in my self-admitted nationalist life, I had hatred for Larry Bird. Even though Bird hadn’t done anything, that “black thang” inside of me got pissed. The “white man’s system of oppression and power” had seized decision-making control over one of the few areas I could hold on to as somewhat sacred in a black man’s life: basketball. But it was all a part of learning the game.

“I’ve always thought of basketball as a black man’s game,” Bird said once. “I just tried to do everything I could to fit in.” The race game that Bird had to play was one that was probably more similar to what Jackie Robinson, Willie Mays and Hank Aaron had to go through in baseball than many of us want to believe. Bird is right when he says basketball is a black man’s game: physically, economically and spiritually. But that doesn’t mean that the game is exclusive to us. The black theory of white men can’t jump exists, but the overlooked theory in “black ball” is: Don’t foul the white boys, because they don’t miss free throws.