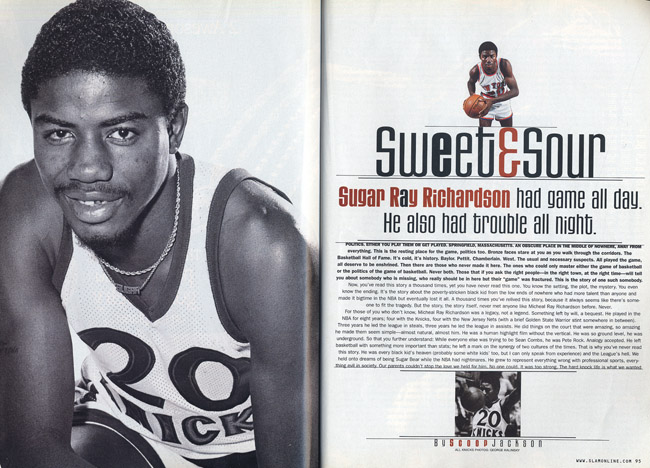 We know you’ll be happy with this week’s Original Old School. Originally printed in SLAM 35, Scoop hit this Micheal Ray Richardson story out of the park arena.—Ed.

Politics. Either you play them or you get played. Springfield, Massachusetts. An obscure place in the middle of nowhere, away from everything. This is the resting place for the game, politics too. Bronze faces stare at you as you walk through the corridors. The Basketball Hall of Fame. It’s cold, its history. Baylor. Pettit. Chamberlain. West. The usual and necessary suspects. All played the game, all deserve to be enshrined. Then there are those who never made it here. The ones who could only master either the game of basketball or the politics of the game of basketball. Never both. Those that if you ask the right people–in the right town, at the right time–will tell you about somebody who is missing, who really should be in here but their “game” was fractured. This is the story of one such somebody.

Now,  you’ve read this story a thousand times, yet you have never read this one. You know the setting, the plot, the mystery. You even know the ending. Its the story about the poverty-stricken black kid from the low ends of nowhere who had more talent than anyone and made it bigtime in the NBA but eventually lost it all. A thousand times you’ve relived this story, because it always seems like there’s someone to fit the tragedy. But the story, the story itself, never met anyone like Michael Ray Richardson before. Never.

For those of you who don’t know, Micheal Ray Richardson was a legacy, not a legend. Something left by will, a bequest. He played in the NBA for eight years; four with the Knicks, four with the New Jersey Nets (with a brief Golden State Warriors stint somewhere in between). Three years he led the league in steals, three years he led the league in assists. He did things on the court that were amazing, so amazing that he made them seem simple–almost natural, almost him. He was a human highlight film without the vertical. He was so ground level, he was underground. So that you further understand: While everyone else was trying to be Sean Combs, he was Pete Rock. Analogy accepted. He left basketball with something more important than stats; he left a mark on the synergy of two cultures of the times. That is why you’ve never read this story. He was every black kid’s heaven (probably some white kids’ too, but I can only speak from experience) and the League’s hell. We held onto dreams of being Sugar Bear while the NBA had nightmares. He grew to represent everything wrong with professional sports, everything evil in society. Our parents couldn’t stop the love we held for him. No one could. It was to strong. The hard knock life is what we wanted to live. This was (still is) the way we shined. In Micheal Ray we found our anti-Christ, our hero.

Sugar. Named after Ray Robinson, named before Ray Leonard. As the old cats in the barbershop used to say about Ray Richardson: “He gave cats tooth decay, we was so sweet.” The testimony of Micheal Ray Richardson started in Lubbock, TX, and ended somewhere beneath hell. Inside of a plastic bag of cocaine and a glass pipe, tucked inside the pocket of a full-length mink coat draped across the back seat of a black, leathered-out Fleetwood Brougham with whitewalls. He became the “toast of the town.” But his run, where his legacy was established, happened to be in NYC. The metropolis of dreams and nightmares. “You know the saying,” Ray would say “If you get large in New York…” the rest of the world is easy. And in a city where legends are more than given birth, they are emancipated, Sugar was large. Walt Clyde Frazier large. Lawrence Taylor large. He was special, endeared. For Micheal Ray Richardson hugged NY and it hugged him back. So tight that he almost died from the love.

“I think that should only be five percent of my story,” Micheal Ray says over the phone. He is in Italy, playing for Forli, ballin’ with (another legend, NC State fame) Rodney Monrow. Ray still does his thing. The other night he had 33, a couple of nights before 30. The day after we talk, 27. At 43 years old, the sugar is still sweet, but the move are more like molasses. “The show is still goin’ on, its just a little slower.” He laughs when he says this, because he ain’t supposed to be doing this at all. But God has blessed him, and so has life. He knows this now. That’s why he says that his battle with coke and his having been the first player ever to receive a lifetime ban from the NBA for drug use should only be five percent of this story. Because remember, this story never met anyone like Sugar before–that’s another thing he knows.

“Ten percent,” I counter. Whatever. The fact of the matter remains that Micheal Ray Richardson is still her, alive (“As much as I did, maybe I should have been dead,” he says, almost to himself), not with a story to be told, a lesson preached, but to be celebrated. Yes, celebrated. Why? Because he is without question one of the best basketball players you have never seen; because he’s a human being, not an angel, role model or Michael Jordan; because he–in that Knick uniform–is just as important to your life as Bernard King. He played ball when the Knicks uniform was fly. Name under the number. Although he caused havoc when he balled with the Nets (he averaged a career high 20.1 ppg with the Nets in ’84-85), it was his bid with the NYK’s that separated him from everyone else in that hallway.

“Should I be in there?” he asks of the Hall of Fame. “Yes.” The truth about politics is that Micheal Ray didn’t play them. Screw diplomacy when you have more game than Parker Bros. During his main run (especially ’79-82), only Magic Johnson and Larry Bird played better all-around ball–and to some that was even arguable. An average night in Sugar Ray’s peak always looked like this: 18 points, eight rebounds, seven assists, three steals. Although his play would be erratic and “out of control” (as some put it) at times, no one could front the numbers. The duality of what he had to go through as a player was complex; at times nothing seemed good enough. After one loss, Knick coach Red Holzman pulled Micheal Ray into his private office for a “meeting.” Sugar got chewed out. He had scored 29 points and handed out 13 assists in the game.

Although he never took over an NBA season the way, say, Bernard King did in ’84-85, nor did he average 20 points consistently like Adrian Dantley or Mitch Ritchmond, Sugar did something different. While some people have put up better career digits—Sugar averaged 14.8 points, 7.0 assists, 6.5 boards and 2.6 steals in 556 regular season games—you must recognize that there are certain players in the game of basketball that are just attractive. Not to the thin eye, but to the soul. They become loved, so to speak. Their names are mentioned in the same breath as the cats who are consensus on the streets. Universal. All-world. Often, though, they are forgotten, except by those who are “diehards,” experts on the essence of basketball, not the game of basketball.

These players are “special.” Their flaws are overlooked because the attractiveness to the soul eclipses their imperfections. Excuses are made, arguments are minimal. Gus Johnson, Johnnie Moore, Paul Westphal, Walter Davis, Bobby Jones, Larry Kenon, Marques Johnson, Otis Birdsong, Billy Ray Bates, Timmy Hardaway, maybe Allen Iverson in 10 years, Steve Francis in 12. They are the second tier, they are devoid of political accolades. No NBA 50, no long All-Star resume, no scoring championships or award tours, a few rings—if any. Of that group or any similar group compiled, Michael Ray Richardson is probably the best.