Original Old School: The Big Everything 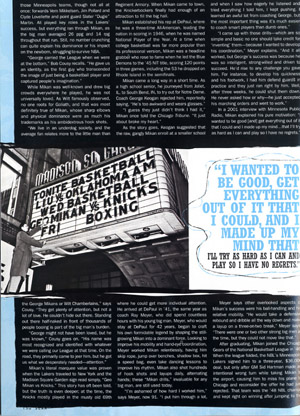 Over the past decade, the style of basketball has evolved. Shaq and Dwight Howard are among the few remaining characters of a bygone era, where big men imposed their will on anyone who dared enter their paint. These days it’s about versatile wing-men or 7-footers stepping behind the three-point arc. However, let’s not forget where dominance was born, in the form of the first intimidator, George Mikan. The Hall of Famer epitomized what hard work can do, as Alan Paul illustrates below. Rules were changed, teams were embarrassed and oh so many points were scored. He truly was ahead of his time, as he carried a young basketball league on his lanky back and helped usher it into what the NBA is today.–Matt Lawyue

George Mikan, who died on June 1 at age 80, was pro basketball’s first true superstar and its first dominant center. Like his successors Wilt Chamberlain, Bill Russell, Kareem Abdul-Jabbar and Shaquille O’Neal, he proudly considered the lane his personal fiefdom and dared foes on either end of the court to enter at their own risk. “George was tremendously intimidating,” recalls Dolph Schayes, a fellow Hall of Famer who often battled Mikan. “He was the best big man by far. He just overwhelmed, overpowered and intimidated anyone and everyone.”

Thanks to Mikan, the Minneapolis Lakers were the game’s first dynasty, winning six titles in his first seven pro seasons and losing only when he hobbled through the ’51 playoffs with a leg injury. And those wins came while Mikan adjusted to rule changes created solely to slow him down. The college game adopted the goaltending rule while he was at DePaul to stop him from planting himself underneath the hoop and swatting shots, and the NBA widened the lane from six to 12 feet to push him away from the hoop after his 28.4 ppg led the League by almost 7 points per game in ’51. His scoring dipped to 23.8 ppg the following season, but he became a better high-post passer and the Lakers still won the next three titles.

Four other future Hall of Famers surrounded Mikan on those Minneapolis teams, though not all at once: forwards Vern Mikkelsen, Jim Pollard and Clyde Lovellette and point guard Slater “Dugie” Martin. All played key roles in the Lakers’ success, but everything ran through Mikan, as the big man averaged 26 ppg and 14 rpg throughout that run. Still, no number crunching can quite explain his dominance or his impact on the newborn, struggling-to-survive NBA.

“George carried the League when we were at the bottom,” Bob Cousy recalls. “He gave us an identity, as the first guy who transcended the image of just being a basketball player and captured people’s imagination.”

While Mikan was well-known and drew big crowds everywhere he played, he was not universally loved. As Wilt famously observed, no one roots for Goliath, and that was most definitely true of Mikan, whose sharp elbows and physical dominance were as much his trademarks as his ambidextrous hook shots.

“We live in an underdog society, and the average fan relates more to the little man than the George Mikans or Wilt Chamberlains,” says Cousy. “They get plenty of attention, but not a lot of love. He couldn’t hide out there. Standing out there half-naked in front of thousands of people booing is part of the big man’s burden.

“George might not have been loved, but he was known,” Cousy goes on. “His name was most recognized and identified with whatever we were calling our League at that time. On the road, they primarily came to jeer him, but he got us what we desperately needed—attention.”

Mikan’s literal marquee value was proven when the Lakers traveled to New York and the Madison Square Garden sign read simply, “Geo Mikan vs Knicks.” This story has oft been told, but the truth is even deeper; at the time, the Knicks mostly played in the musty old 69th Regiment Armory. When Mikan came to town, the Knickerbockers finally had enough of an attraction to fill the big hall.

Mikan established his rep at DePaul, where he was a three-time All-American, leading the nation in scoring in 1946, when he was named National Player of the Year. At a time when college basketball was far more popular than its professional version, Mikan was a headline grabber who rose to fame when he led the Blue Demons to the ’45 NIT title, scoring 120 points in three games, including the 53 he dropped on Rhode Island in the semifinals.

Mikan came a long way in a short time. As a high school senior, he journeyed from Joliet, IL, to South Bend, IN, to try out for Notre Dame. Coach George Keogan rejected him, reportedly saying, “He’s too awkward and wears glasses.”

“I guess they just didn’t think I had it,” Mikan once told the Chicago Tribune. “It just about broke my heart.”

As the story goes, Keogan suggested that the raw, gangly Mikan enroll at a smaller school where he could get more individual attention. He arrived at DePaul in ’41, the same year as coach Ray Meyer, who did spend countless hours with his young big man. Meyer, who would stay at DePaul for 42 years, began to craft his own formidable legend by shaping the still-growing Mikan into a dominant force. Looking to improve his mobility and hand-eye coordination, Meyer worked Mikan relentlessly, having him skip rope, jump over benches, shadow box, hit a speed bag, even take dancing lessons to improve his rhythm. Mikan also shot hundreds of hook shots and layups daily, alternating hands; these “Mikan drills,” invaluable for any big man, are still used today.

“I’m ashamed of how hard I worked him,” says Meyer, now 91. “I put him through a lot, and when I saw how eagerly he listened and tried everything I told him, I kept pushing. I learned an awful lot from coaching George, but the most important thing was it’s much easier to coach smart players than dumb ones.”

“I came up with those drills—which are so simple and basic no one should take credit for ‘inventing’ them—because I wanted to develop his coordination,” Meyer explains. “And it all worked, but George’s success was because he was so intelligent, strong-willed and driven to succeed. He’d rise to any challenge you gave him. For instance, to develop his quickness and his footwork, I had him defend guards in practice and they just ran right by him. Well, after three weeks, he could shut them down. He never asked how or why—he just accepted his marching orders and went to work.”

In a 2001 interview with Minnesota Public Radio, Mikan explained his pure motivation: “I wanted to be good [and] get everything out of it that I could and I made up my mind…that I’ll try as hard as I can and play so I have no regrets.”

Meyer says other overlooked aspects of Mikan’s success were his ball-handling and his relative mobility. “He would take a defensive rebound and dribble all the way down and make a layup on a three-on-two break,” Meyer says. “There were one or two other strong big men at the time, but they could not move like that.”

After graduating, Mikan joined the Chicago Gears of the National Basketball League in ’46. When the league folded, the NBL’s Minneapolis Lakers signed him to a three-year, $36,000 deal, but only after GM Sid Hartman made an intentional wrong turn while taking Mikan to the airport, causing him to miss his plane to Chicago and reconsider the offer he had just rejected. That team was the ’48 NBL champs and kept right on winning after jumping to the pre-NBA Basketball Association of America. Though the name of the League kept changing, Mikan remained in Minneapolis for the rest of his career, retiring after the ’53-54 season, only to sit out one year and return for 37 games in ’55-56. He scored 11,764 points in nine pro seasons and was just 31 years old when he finally hung it up for good, having suffered at least 10 broken bones along the way. “I broke my arm, my leg. I can’t tell you how many stitches I had in my face,” Mikan told MPR.

After a short stint as the Lakers head coach in ’57-58, Mikan went to DePaul Law School, then worked as an attorney in Minneapolis before becoming the first commissioner of the ABA in 1967. He is credited with coming up with the league’s trademark red, white and blue ball, and also oversaw the introduction of the three-point line and other innovations.

In his later years, Mikan suffered a variety of ailments, including diabetes and kidney failure; he had a leg amputated in 2000 and a finger more recently. Through it all, he remained an outspoken advocate for the NBA to do right by its pioneers. Mikan, who never made more than $35,000 a year, had a monthly pension of $1,700. Patricia, his wife of 58 years, will now receive half that. Players whose careers ended before 1965—a small group of men who played a tough game under tough conditions for a small amount of money—were frozen out of a more generous pension plan struck by the union. Knowing the situation, Shaquille O’Neal stepped forward to pay the costs of Mikan’s funeral. The old center’s former teammates and opponents were both pleased and horrified.

“How could it come to someone having to pay for this man’s funeral?” asks Ed Macauley, another Hall of Fame big man of Mikan’s era. “We feel the guys who started the League are being discriminated against. We rode trains and buses and stayed in the cheapest hotels, with five dollars a day in meal money. It’s a slap in the face. We all appreciated George taking a stand, though unfortunately he didn’t succeed.”

Macauley continues: “A player making $10 million a year makes more in two games than I made my entire career, yet they get a much bigger pension than the ballplayers who started the League. It’s not right, and George epitomized the situation. The NBA depended on him drawing big crowds to survive its toughest times, and then they discriminated against him in retirement. It’s hard to understand.”

Now the pension fight drags on without Mikan around to lend his eloquent voice—or benefit from any resolution. In that 2001 interview, he summed up his leave-it-all-on-the-floor approach to the game: “I don’t have any regrets that I could’ve, should’ve played better.” If only the NBA and its current multi-millionaire players could be as regret-free about the way they treated their first superstar in his twilight years.

Rest in peace, George. And thanks from all of us who love the game you helped create. 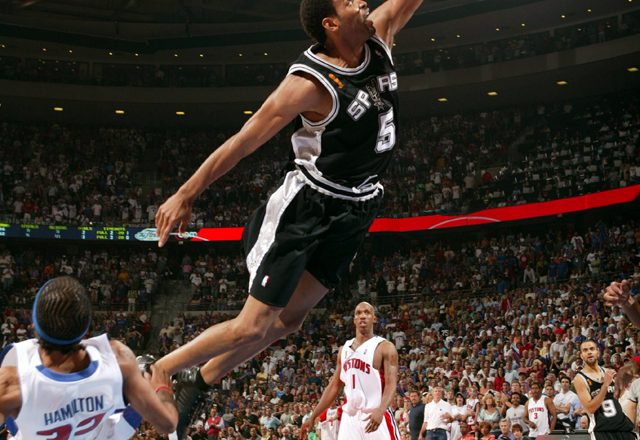 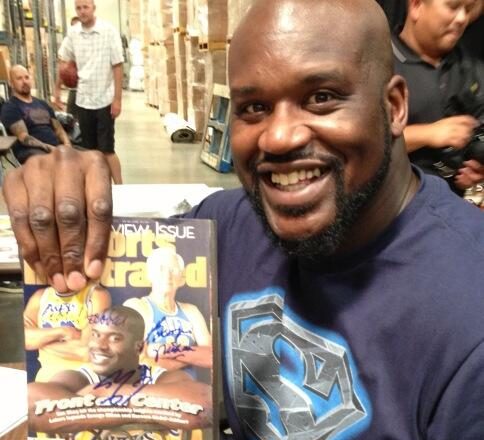 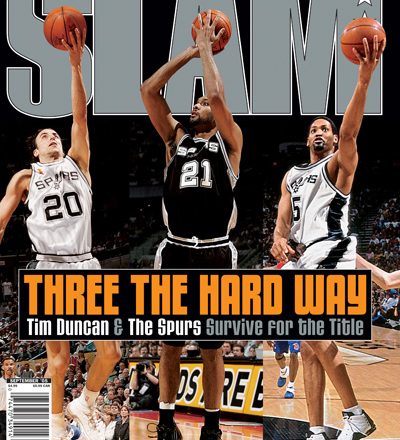