Otis Smith on the Celtics: ‘They Act Tough’ 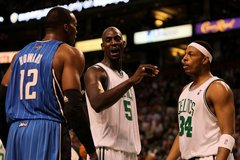 The Orlando Magic and Boston Celtics have a long, and rich history of trash talk. Whether it be on the court, or even more entertainingly, off of it.

Over on the Orlando end, GM Otis Smith questioned the Celtics’ toughness, or lack thereof. From the Sentinel (via, Celtics Blog):

Sentinel: Is the team tougher now?
Smith: ‘Tough is relative. Tough to who? Is anybody tough?’
Sentinel: One could argue the Celtics are tough.
Smith: “They act tough. They’re not really tough. They act tough … To say that we’re going to go ‘Aarrgghh!? No one does that in this league. At the end of the day, they’re all young men. They’re going to go out and play. One team is going to execute better than the other. That’s what it comes down to. It doesn’t come down to that kind of toughness.”

Now, whether or not the Celtics’ bite is as bad as their bark remains up for debate.

All I know is that I can’t wait for these two teams to continue their trash talk (and basketball) during the Playoffs. We’ll be able to more easily determine which side is tougher then.