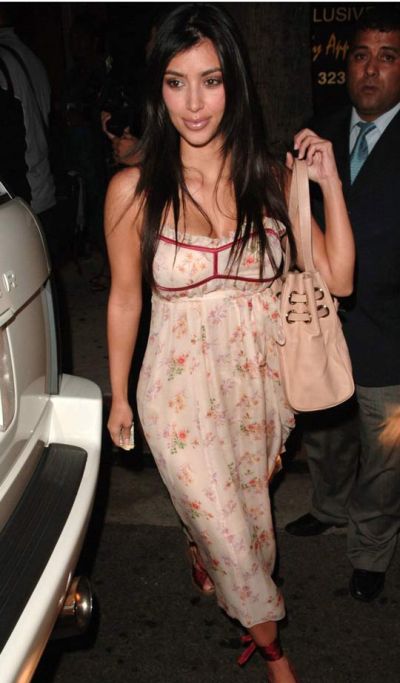 First and foremost, shout out to Alex, with Undefeated, for the Paris Hilton Birthday Bash hook-up. They recently opened a branch in Vegas, across from the Hard Rock Casino – check it for all your fresh, exclusive sneakers. On to the party… The scene went down at Body English, inside the Hard Rock. A red carpet/paparazzi area was setup, but the crowd was too thick to see anyone that came through. Ex-NBAers take note: height is also a key asset for paparazzi to combat a crowd – definitely post-NBA career opportunities there. Supposedly Jessica Simpson came through, and Rick Fox, but those are both unconfirmed. Luke Schenscher hung on the outskirts, most likely unable to break the seemingly impenetrable wall of young Hollywood-types. A little before midnight, security escorted the Paris entourage around the backside of the crowd, including her man, a couple other hot female friends (I’m fairly certain one was Kim “superstar” Kardashian, and two midgets! Midgets must be the new Blackberry… a must have for the jet set this All-Star Weekend. Paris circled back though, and made her official red carpet entrance in the face of a wall of flashing cameras. Now that Paris had arrived, we figured it was our time…

Inside, it was already going down. The club had two levels; level one consisted of a central dance floor with a stage at one end, while level two was a balcony wrapping around the entire perimeter, most of which was V.I.P. (Paris’ V.I.P. area was down bottom, to the side of the dance floor). The only bit of birthday decoration was a slideshow of Paris images over the years. Surprisingly, none from her, uh, most (in)famous video. DJ Melo-D of the Beat Junkies held down the DJ Booth, and kept it live all night, providing the soundtrack for the on-bar go-go dancers. He played standard club fare, and kept it interesting by cutting in snippets of Paris saying her trademark, “That’s Hot”, and even played her single, “Stars Are Blind”. I posted up at the top of the central stairs, overlooking the stage and dance floor, to get a good view of all the debauchery. The NBA finally made itself present, albeit weakly, when Marko “Hollywood” Jaric came through, followed shortly by Sean Rooks, and then Alaa Abdelnaby! Who knew?

The rest of the night, I couldn’t even script if I wanted to. I saw Jamie Kennedy move through the crowd, thinking he just came to party. Nah, he came to perform! With partner-in-rhyme Stu Stone, he performed his not-really-a-hit song “Circle Circle Dot Dot”  — yeah, as in “now I’ve got my cootie shot”. The crowd reacted mostly with dazed and confused looks, with a smattering of both boos and applause. Thankfully, Jamie only blessed/cursed us with one track, before giving way to real King Of The South, Ludacris! LUU-DAA! With Paris onstage dancing, he went through all his hits, rocking the crowd. After Luda put down the mic, a giant birthday cake was brought out onstage, and a well-documented (cameras everywhere!)

Paris blew out the candles, confessed her love for all in attendance, and thanked everyone for coming. She exited the stage dancing to the 21st Century birthday anthem, 50 Cent’s “In Da Club”.

At one point, I was hanging just outside the roped-off downstairs V.I.P. area. It felt like a music video, as Scott Storch and Fat Joe, with full bling and stunna shades on, were holding down a booth. Then, Paris herself comes storming out, literally shoves me out of the way, spills her drink on me, and her bodyguard steps on my left Jordan! Wild. Surreal to the nth degree. Apparently she was chasing after her flavor-of-the-month (or is that day? Hour? Minute?) boy toy, so she could scream on him. Surreal to the nth to the nth degree! More drama than the Gangsta Grillz collection.

The non-V.I.P. area began clearing out after the performances, but Jamie Foxx took over the mic, providing V.I.P. play-by-play, requesting track after track from the DJ, and shouting out various attendees. Then, just as Sugar Shane Mosley was making a late appearance, we decided to call it a night.

Random notes from the NBDL All-Star game earlier in the day: This was probably the best-played game of the weekend. Scouts were present, and cats had a reason to go all-out… That being said, cats are not likely to get upgraded Beyonce-style, to Bobcats status, any time soon… Luke Schenscher actually can dunk, despite my doubts… Gerry McNamara officially cannot even guard the NBDL point guards, so don’t hold your breath for his NBA debut… Pops Mensah-Bonsu is man among boys amongst this talent, but he might be a little full of himself/have a bad attitude… Alan Anderson – NBA GMs, you’ll be getting yourself a man with the fundamentals on lock, and a consummate pro… Guess what Loren Woods showed us? A lack of effort, surprise, surprise.