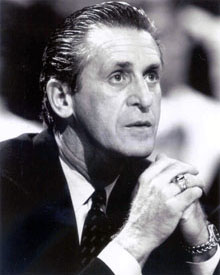 That’s how much longer Pat Riley says that he’ll be the Miami Heat’s head coach.

“I don’t want to be a one-and-done guy every year. I have three years left on my contract, and I will try to coach those out unless someone else makes a decision on me. That’s a commitment I want to make to the organization,” Riley said

Of course, this is the same guy who once made the commitment to the organization that he wouldn’t suddenly stop coaching – citing health reasons – when the team was sucking only to return after Stan Van Gundy had righted the ship, and then proceed to take all of the credit when they won the title. But hey, no need to split hairs, right?

“After the two rebuilding years, I was absolutely burnt [out]. Three or four years ago, I was looking to get out of it totally. I don’t feel that way anymore. [During the years of losing], I wanted to go to Mt. Everest. I didn’t have any joy. That has changed.”

I’ll give a dollar to whoever can explain that Mount Everest reference to me. Like, is he saying he was going to live on Mount Everest (which would’ve been unspeakably cool, literally and figuratively), or was he going to climb it? I’m flummoxed.