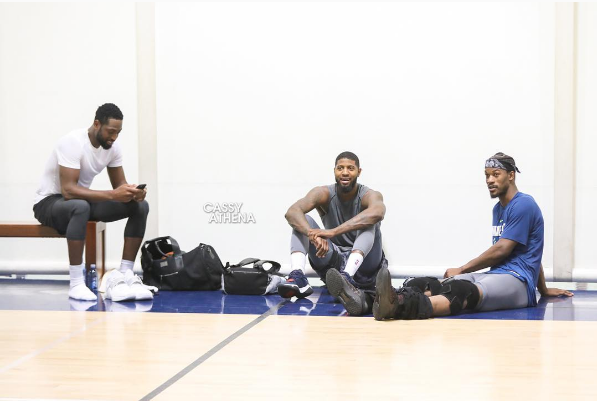 Paul George, Jimmy Butler and Dwyane Wade recently took part in a pickup game while out in L.A.

They were joined by Tony Snell, Taj Gibson and Joakim Noah.

Ahead of his first season with the Thunder, George has been going hard in the gym, and says he “came a long way this summer.”

On a sandy stretch of about 200 yards, George and other [Ryan] Capretta clients do interval workouts, sprints, plyometric movements.

“It’s called a sand dune, but it’s basically like a sand mountain,” Capretta said in a phone interview last week. “You’re racing up this hill, and it’s an a**-kicker. It crushes you.”

That’s been the gist of the summer of George.

“About a week” after the Pacers lost to the Cavaliers in the NBA Playoffs, Capretta said, George was at the Proactive facility in Westlake Village. Weeks before he was traded to the Thunder, George was formulating a plan to attack his offseason.

“He’s thoroughly excited for the season,” Capretta said. “He’s getting a fresh start. He’s got a lot of confidence in what (the Thunder) are gonna do. When you talk to him about it, he lights up.”