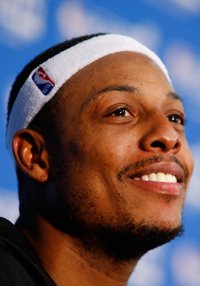 After forgetting how to play basketball for six gawd-awful games against the Cavs, Paul Pierce finally reminded people why his nickname is The Truth in Game Seven yesterday.

Pierce and LeBron James engaged in a memorable shootout, and Paul emerged victorious, leading his team back to the Conference Finals for the first time since 2002.

Following the big win, Pierce was predictably fawned over by the Boston media this morning, and it was longtime Boston Globe basketball scribe Bob Ryan who took the cake.

Every once in a while Pierce reminds us that he is the greatest pure scoring machine in Celtics history. Many old-timers bristle when you say that, citing John Havlicek, Sam Jones, Larry Bird, Kevin McHale, or whomever. But it just happens to be the truth.

That is such an absurdly incorrect statement, that I don’t even know where to begin tearing it apart.

Yes, it was a tremendous performance on a large stage, and Pierce showed the world again that he’s capable of filling it up, but let’s not get carried away here.