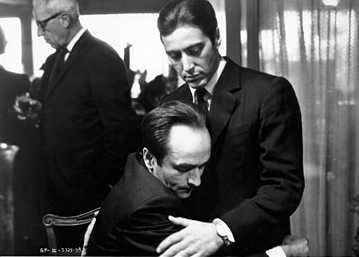 Penny Hardaway, he of the unlimited potential in his youth, and extremely limited post-op knees, is returning to Shaq’s side. I can be a misty-eyed sentimentalist as much as the next man, and of course I remember the dominance of that young Orlando team, but what about these incredible quotes from Shaq a few years ago:

“The difference between those three is the Godfather trilogy,” O’Neal said in classic Shaq-speak. “One is Fredo, who was never ready for me to hand it over to him. One is Sonny, who will do whatever it takes to be the man, and one is Michael, who if you watch the trilogy, the Godfather hands it over to Michael. So I have no problem handing it over to Dwyane.”

It doesn’t take a brain surgeon to realize Shaq was comparing Kobe to the psychotic Sonny, and Penny with the weaker Fredo characters from that movie. There only seems to be one that O’Neal would go to the mattresses with. As for Wade, last night it was his shot that sent the Knicks to sleep with the fishes.

“I would love to see the ball in my hands, but I’m not the best player or the best shooter on this team,” O’Neal said. “I don’t mind handing it over to Michael Dwyane Corleone.”

Now, at the end of Godfather 2, you might recall a scene where Michael orders one of his killers to end Fredo’s disappointing life. He does the classy thing and tells him to wait for their mother to pass away first, but still it is one brother ordering the execution of another. Penny, do not go fishing with Dwyane Wade or one of his friends.

P.S. does that make Smush Parker the irritating Andy Garcia character from Godfather 3?

Ok, I kid I kid. Just can’t resist movie analogies. He has to make the team first. Isn’t it funny how Penny and Steve Francis were traded for each other. In part I of Myles’ Reasonable Doubt epic, he mentioned that people get turned off by guys getting paid tens of millions without earning it by “playing basketball.” Penny and Steve are not so proud members of that not-so-exclusive club. The mysterious rehab in Memphis of Penny Hardaway was pretty funny for us Knicks fans. “Yeah I’m working really hard here. I just want to play. Hey is there a $15 million check waiting for me? Do I have to keep doing this? I mean, yeah I’m working really hard on this rehab. I love the game!” Well, it’s good to see that Penny still has that fire to play. I remember listening to a Knicks pre-game show on the radio a few years before they played Cleveland, and Penny was the interview subject. Johnny Hoops asked him “Are you going to tell LeBron, hey I used to be like you?” He kind of was. Skinnier, more starch in his jersey, had a better puppet for a sidekick, but Penny was robbed of a legendary career by injury as much as anyone ever has been. The Eastern Conference is becoming the feelgood story conference.

And while we’re on the topic of feelgood stories, I want to say congratulations to SLAM’s Art Director Stephen Goggi, the king of all banners. His wedding is tomorrow. Lady readers, you missed your chance. See you tomorrow Steve-o.