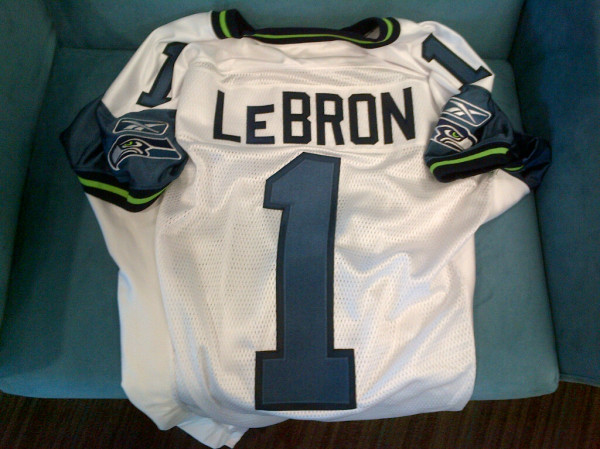 The NBA lockout has given teams in other hoops leagues around the world a chance to woo basketball’s biggest stars, and with no end in sight to the current labor fight, other sports are even trying to get in on the action.

All this week, LeBron James and Seattle Seahawks head coach Pete Carroll have been publicly flirting with one another on Twitter, with Carroll playfully recruiting James to join his football team.

Pete Carroll took things to another level last night, by showing the Miami Heat forward (and the rest of the world) a customized LeBron Seahawks jersey he had made.

Fox Sports looks into the back-and-forth between player and coach:

James may not have meant anything by the tweets he sent out Tuesday asking about NFL free agency, but his messages still got the attention of at least one NFL head coach. Late Tuesday night, Seattle Seahawks coach Pete Carroll sent LeBron the following message: “Hey @KingJames are you aware of what the League’s rookie minimum is?” LeBron responded a short time later, telling the second-year NFL head coach, “yeah more than what I’m making now Coach.”

The banter continued with Carroll asking James, “I kinda think of you as a touchdown maker but is it true you think of yourself as a pass rusher?” and James responding, “TD maker for sure!” Wednesday morning, Carroll picked the conversation back up, suggesting that James work out at the University of Miami football facility. Then Carroll upped the ante even more Wednesday night, when he sent James a photo of a custom-made No. 1 Seahawks jersey with the name “LeBron” stitched across the back. (James later responded, “Nice!! Looks great.”)

Despite playing the game of football back in high school, it’s probably beyond unlikely that LeBron James would risk injury (and humiliation) by stepping on to an NFL field. But it’s fun to contemplate the idea of LBJ trying to haul in a few touchdowns.