The Spurs' eighth consecutive win has the 76ers still searching for their first victory. 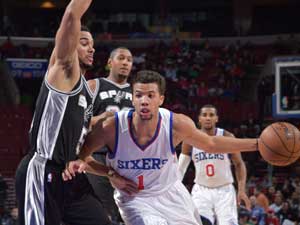 If the Philadelphia 76ers lose their next game, they’ll tie the 2009-10 Nets for the worst start to a season in NBA history. That should be a story for Thursday’s Post Up, though. Let’s instead focus on last night—a game the Sixers might’ve, could’ve, almost maybe would’ve won.

No aforementioned -’ve was in the thoughts of anyone prior to the game. Of course not—the defending champion San Antonio Spurs were about to come to town, and it really wouldn’t matter if the stars played or not. The spectacle of When Will the 76ers Get Their First Win? is a nightly (or at least like, bi-weekly) show to tune into or Twitter conversation to follow, but no one thought twice about whether last night’s game could be the one.

When the Spurs hit the peak of their lead—a 24-point advantage—with 2:37 remaining in the first half, the predicted outcome was official right? I mean, couldn’t this Marco Belinelli (11 points) poster be a sort of symbol for how the rest of the NBA teams owned little ol’ Philadelphia?

And still, the Sixers did their best to come back without both Tony Wroten and Nerlens Noel. They outscored the Spurs by nine points in the second half and went on a little run to cut the once 24-point lead to just five with about a minute and a half remaining in the game. Kawhi Leonard (26 points and 10 rebounds) sealed the San Antonio win right after with a layup plus the free throw and the vets went on to win their eighth in a row.

The three-point shot can either be a team’s best friend or worst enemy on any given night. That split personality of the arc was very clearly seen in last night’s Wizards’ blowout win over the visiting Heat. In the first half, the Wiz Kids hit 7-7 from downtown, while the Heat went 2-10. In the second, the Wiz held the Heat to 0-12, and Miami finished on an ugly 9.1 percent shooting night from the arc.

John Wall (18 points and 13 assists) played a heck of a game right from the first quarter, dishing out 5 assists in the opening period. He had another 5 assists in the second, and hit a three at the halfitme buzzer to put DC up 66-49 heading into the locker room. The Heat were unable to catch up in the second half, though both Dwyane Wade (20 points) and Chris Bosh (21 points and 8 rebounds) had respectable numbers.

All in all, it was a fun night for the Wizards and their fans. Why else would Marcin Gortat (15 points and 10 rebounds) show off his nifty dance moves from the bench after this sweet Andre Miller (6 points and 4 assists) play?

The Utah Jazz have dug themselves into some deep holes this season. It’s a pattern: go down double-digits, rally, but come up short. The story was the same last night. Utah trailed by as many as 22 in the Nuggets’ visit, but they went on a 22-4 run to tie the game at 83 early in the fourth quarter.

With 5:55 left in the game and the Nuggets up by 4, Arron Afflalo (14 points) was called for a flagrant-two and therefore automatically ejected when he made contact with an airborne Alec Burks (22 points and 8 rebounds) trying to get to the hoop. The game continued with Burks and the Jazz still in it, until Ty Lawson (15 points and 12 assists) got the bounce on a jumper to put the Nuggets up 101-99. Denver went on to win, with all Nuggets contributing to the final score—seven of them in double-digits.

The Los Angeles Clippers played merciless hosts when the Minnesota Timberwolves came to town last night. After the T-Wolves won the first quarter 34-31, the home team outscored their guests 70-34 in the second and third, and went up by as many as 37 early in the fourth. With 23 points apiece and a lead that wasn’t about to fade, JJ Redick and Blake Griffin earned themselves a fourth quarter rest. Redick had 13 of the Clips’ first 19 points in the game, and a couple of four-point plays. Minnesota lost their second straight, but Mo Williams (7 points and 7 assists) and Andrew Wiggins (14 points) did this, so that was kind of nice: