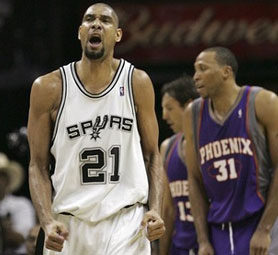 Ten days earlier, the Phoenix Suns took Game 2 to even their Western Conference Semifinal series with the San Antonio Spurs. All sarcasm aside, this break was the longest (3 whole days between) of its kind in my playoff memory, and I was in San Antonio during the ’05 Finals for the first two games of their seven-game slugfest with the Pistons (is that reverse foreshadowing?) I’m going to spare you a few pages of my early-game musings and cut to the chase. The first half was a great up and down game with the Spurs more than happy to keep the pace to a slight jog at the very least. The halftime buzzer sounded in the AT&T Center (some two dozen GO. SPURS. GO’s later) with the home team, the proud owners of a slight two-point advantage.

Nash is struggling to get his perimeter game going. With just over six minutes left in the quarter he is 0-fer from the field with just one point on the stat-sheet.

Tim Duncan is completely killing the Suns. Nene and Co. “handled” the 9-time First-Team All-NBA (a fact that can’t be understated) in so much that they kept him to his basic 20 and 10. With six minutes left, he already has 20 and 14, mainly on Amare Stoudemire and his buddy Kurt Thomas. Duncan’s numbers in the Phoenix series are ridiculous. Has the man played a game of pro basketball where he’s gone for like only 15 and 7?

After averaging 25.5 in the first two games, Nash hits his first hoop with five minutes left.

Manu Ginobili is employing his “Tenants of Scoring” by going hard to the hoop, complete with his trademarked flop. But no call? And then once again!? This time he takes a finger jab, free of charge.

Back to Nash. Although he is just starting to hit his shots, he is busting these fools. No one can keep him out of the lane. They are checking the MVP with Brent Barry? That won’t end well.

STAT’s extensive time on the bench (with four fouls) gives Kurt Thomas plenty of time to get acquainted with Duncan.

Manu is still not getting calls! This is an outrage! Undeterred–well maybe somewhat deterred as he takes his game outside–the Argentine catches fire from long-range. Manu has already outscored his combined output from Games 1 and 2.

Did I mention that Manu Ginobili is playing well? Tim Duncan’s not so bad himself.

Spurs grasp an eight-point lead (80-72) at the end of the third with the help of the two guys above. It does not look good for Phoenix. You’ve heard me a thousands times before talking about these kind of leads for San Antonio are more like 15-17 point leads. Unless Tracy McGrady is involved, forget about it.

I wasn’t going to get into these David Blaine commercials, but…. At least hook me up with that Cris Angel dude. Mindfreak doesn’t sit in a box over a river in his own waste for a month and call it ‘magic.’ He strolls into shady parks around the greater metropolitan Las Vegas-area and makes strangers levitate. A side of me digs magic, but not David Blaine. He’s no Houdini.

First possession, things become severely grimmer for those in the Valley of the Sun as Amare decides he’s got this dude #21. Whistle, easy call, 5th foul. Cue ballboy with STAT’s warm-ups.

Duncan and Manu continue to pace the Spurs. Duncan is hitting shots from angles only he would dare attempt.

In a quick trip to Bizarro-World, the Suns start missing tons of little “bunnies” around the hoop like a particular team from a mountainous state did just weeks prior against this very same San Antonio team.

I completely abide by the NBA-adage that if a team is within 15 points with 5 minutes left, then said team is still in the game. Teams can come back so quickly. However, the Spurs are above certain rules of the game.

TD is absolutely killing them. And by “them,” I mean, Kurt Thomas.

Phoenix is super resilient, though, running off a quick six, to make the difference ten with 6:34.

After Nash hits a deep three to make the San Antonio lead just seven, Robert Horry emerges from the aforementioned Bizarro World to put the lead back to ten. Where is Michael Finley?

Twice in the game’s final minutes, the Suns cut the lead to six. Once at the 3:30 mark and again with just 1:40 left in the game. The first lead lasted one possession until Duncan ignored Kurt Thomas’ existence to get the hoop and the foul. Back to nine. Later, just 18 seconds after a Shawn Marion 3, Mr. Finley answers my previous inquiry by nailing a long-range bomb. Back to nine. I will reiterate a claim I made during the first round, “Every team needs a Michael Finley!” I believe the expression is, “true that?”

“We always respond well after losses.”
“We wanted to protect home court.”

Game 4 is tonight by the Alamo. Back tomorrow.