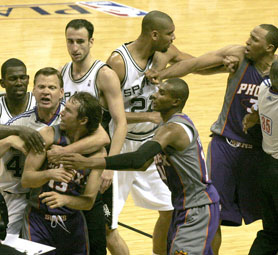 Much of the talk on Monday surrounding the Phoenix and San Antonio series, both at the SLAM water cooler and on local (Denver) and national talk shows was about the Bruce Bowen incident from Game 3 of the teams’ Western Conference Semifinal series. Although, not an actual factor on the outcome of the game, the now-famous but far from isolated incident against the nether-regions of Suns’ maestro, Steve Nash speaks to an issue surrounding “dirty play” versus “cheap shots.”

I’ll try to be brief on this point. Although, I have little issue with the increased physicality we see in the postseason, the concept of “policing” does bring up concerns. All of the major professional sports have ways of internally policing themselves, except basketball. Hockey needs no description or explanation. In baseball, someone gets one up in the ear. Football is full of opportunities—under piles and above—to exact a bit of revenge, but not hoops. The Marty McSorley of the NBA is David Stern, or Stu Jackson. You knew that Suns’ Head Coach Mike D’Antoni wasn’t going to send Kurt Thomas in for a Cobra Kai “sweep the leg” on Tim Duncan. I have made no bones about my thoughts that Bowen is indeed a dirty player in a league full of mainly civil beings. But, the dude has been first-team All-Defensive over the last four years, so maybe the powers that be at the league offices didn’t want to compromise the integrity of their own shine lists.

Body bags, banzai trees, and guys named Dutch aside, Game 4 is huge. It almost feels like the winner of this particular game, tonight, has the inside track on the Western Conference title, complete with the chance to play Detroit.

The game’s first half was much like the previous one, a back and forth battle where each team’s stars both had their way at times, while also enduring struggles along the way. The pace was extremely “pro-Spur”–if that scam is to believed anymore what with their two previous wins around the 110 mark. To be truthful, this game was played out almost exactly like Game 3. My notes could have been duplicated and re-run under the guise of Game 4.

That is, until the Spurs suddenly became unable to make shots. On Saturday evening, the Spurs were able to answer every run that Phoenix made by connecting on a three or a bucket inside. Last night this happened again as the Suns were behind the eight-ball, down ten with around nine minutes left in the contest. A Shawn Marion-led 7-0 run made the Spurs’ lead just three with slightly over seven minutes remaining. Michael Finley promptly answered the run with a three of his own. Six point game. Two minutes later, a couple Kurt Thomas free-throws brought the Suns to within a deuce before Finley hit another three to bump it back to a five-point game. With 2:29 left in the game, Tim Duncan put the Spurs back up by five, but unfortunately for the home fans, this was the last Spur hoop of the night. Nash and Amare Stoudemire linked up for a couple baskets down the stretch while the Spurs clanked jumper after jumper. The Suns held on through a crazy finish to even the series at two games a piece with a 104-98 win. The victory bucked every tradition of Spur basketball. Yes, I had written, “this game is over” many times during the second half, but this time the Suns rendered my claims, hogwash.

Although he struggled for periods of the game, Nash was brilliant when it mattered most, scoring 24 points to go along with 15 dimes, including two clutch behind-the-back set-ups late in the game. Despite both of the team’s bigs fighting through foul trouble for most of the game, STAT was able to break through for 26, while Duncan—who had one of “worst” games of the postseason— finished with 21 and 11. Surprise.

I must revisit the policing topic from earlier in the piece (something I wrote long before the game even started.) With just seconds remaining and the Spurs down three, a missed Manu Ginobili shot was cleared by the Suns. Instead of slowing things down and holding for a foul, Nash decides to jet up court. Unfortunately for the Suns’ guard, a 6’10” wall named Robert Horry was waiting near mid-court. The ensuing “shoulder-block” sent the diminutive guard flying into the scorer’s table inciting a brief period of pandemonium. Horry ejected, Raja Bell T-ed up for retaliation, and a couple Suns creeping from the bench. (Should STAT and Boris Diaw get suspended? Kinda looks like they should.)

Did Pop order a code red? Doubtful. Although, the play was obviously dirty, it was surely not preconceived, rather a fit of emotion. The play was actually one that was surprisingly not perpetrated in reversal. The Suns owed the Spurs one; not the other way around. Did the NBA police fail in their assessment of the Bowen issue? Yes, but again, this play would have happened whether Bowen was suspended for his below the belt attack or not.

Although roughed up a wee bit, Nash was cool about the WWF-cross-body-block. When asked about the play and whether he was physically straight, the two-time MVP, replied, “You know I’ve been working on the guns a little…..”

Back to reality, this win was huge for the Suns as they head back to Arizona for Game 5 tomorrow night. Series tied at 2, both teams angry, tensions rising, AND the majority of the NBA’s First-Team All-NBA represented? I love this game and I love this series. For those forced to cover/watch that crap out east, I’m sorry, so sorry…..