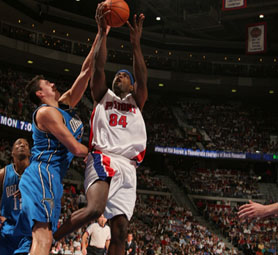 I had an interesting weekend.

Friday, I was hanging out with John Amaechi, who was back at Penn State for a couple of speaking engagements. While I certainly wish my alma mater’s most prominent hoop alum wasn’t a mediocre five-year pro, I’m not mad at John. He’s a smart, eloquent dude whose intelligence, charitable work and social consciousness puts most jocks to shame, and I’m proud my school can claim him.

From what I’ve heard, though, Tim Hardaway’s not a fan.

Saturday was our annual spring football scrimmage, the Blue-White Game, which officially drew 71,000 people. Yes, that’s right, 71,000 for an intrasquad scrimmage in late April, and honestly, I think that number’s low—certainly if you counted the people who couldn’t pull themselves away from their tailgating to actually go into the stadium, it was probably 100K, easy.

There was also this grassroots thing that built up on campus here after the Virginia Tech shootings last week. There were a few local connections to what happened: One of the victims, a grad student at VaTech, was a Penn State graduate, and his father still works here at PSU; and, one of our freshmen running backs went to high school with two of the girls who were killed. As it turned out, about half of the crowd at the Blue-White Game wore maroon and orange. And honestly, it was pretty powerful. I’m not generally big on public displays of compassion and mourning, because I think they tend to be melodramatic and self-serving. But being in the middle of this—like most of the student body and a lot of other folks in town, I actually bought a VaTech shirt the day before the game—it felt positive and genuine. Hopefully, people in Blacksburg noticed and appreciated it.

On a drastically less sincere note, I couldn’t help thinking: It really is pretty impressive to think of having damn near a hundred thousand people out for a spring football game. I mean, what does that say about the commitment and passion of the fan base that supports that program? Maybe I’m biased, but if I were a top recruit, I’d be blown away by that. And so, inspired by his thoughtful diary posts from last week, I feel I need to make my pitch: Patrick Patterson, I truly believe you should play basketball for the Penn State football team. You’re a really great guy and we’d love to have you!

Anyway… I got home late Saturday afternoon, tired and sunburned but generally happy with my place in the world, a mood only slightly dampened by the fact that I had to watch the Pistons’ ritual dismembering of the Magic later that night. I wasn’t exactly excited, but I figured I could at least minimize my own suffering by DVR’ing the game and starting it around 9 pm, by which point I could fast forward through the unimportant stuff — halftime, commercials and the first three quarters — and catch the end of the game not long after it happened.

Only my son, God bless him, had other plans.

I’ve mentioned my kid’s obvious genius in previous posts, but on Saturday, he took it next level. He obviously knew I didn’t want to have to watch this stupid game, so my not-quite-two-and-a-half year old decided to take one for the team and land in the local emergency room for three and a half hours Saturday night. Some asthma-related ish, and it seems not to be serious (he’s fine, thanks), but it was certainly not the night I had planned.

I haven’t been inside an ER in a while, and to my surprise, this one wasn’t actually that bad. It was clean and not overflowing with half-dead people, and the staff was really nice. The clientele, meanwhile, was about a 50-50 split between drunk college kids (the dude with the busted forehead who’d been playing football on a tennis court, along with a slew of the predictable alcohol-poisoning candidates—it’s a football weekend at Penn State, we don’t f*ck around) and local yokel trailer trash, including the 40-something woman with the prison-caliber hand tats, the 40-something woman with her grim-looking husband who actually said she hurt her arm “falling down some stairs” (yikes…) and the 40-something woman who was escorted in by five cops. Physically, she looked fine, but apparently the ER takes behavioral emergencies these days, too.

My kid was a f*cking champ, for the record, and not only because he kept me from having to watch that game. Anyway, we didn’t get home til about 1 am, so Pistons-Magic would have to wait for Sunday. Sadly, the DVR worked as planned, so I finally sat down to watch on Sunday afternoon. Here’s what I saw and heard…

Mike Tirico in the opening seconds: “Orlando with the worst record of the 16 playoff teams, but the records are out the door.” No, Mike, they’re not. Not really.

11:30: Jameer Nelson is guarding Rip Hamilton, which I notice because Rip just hit an 18-footer over Jameer’s outstretched arm.

11:13: Chauncey Billups fouls Dwight. Mike Tirico says, “We’re gonna see a lot of this — Detroit is going to invite Dwight Howard to become very familiar with the free throw line here at the Palace.” Hubie Brown says, “Absolutely.” Whenever Hubie says “absolutely,” I know it must be true. Dwight misses both free throws.

11:05: Grant Hill is on Chauncey Billups, which I notice because Hubie says, “You’ll notice Grant Hill is on Chauncey Billups.” This goes against what I wrote in my exhaustive series preview, when I posited that Jameer would guard Chauncey; my assumption is that Brian Hill read my preview and realized I was right about how CB would abuse Jameer, and adjusted his defense accordingly. In which case, you’re welcome, Brian. Just as long as you know it’s not gonna make much difference.

But I interrupted Hubie, who went on to say, “Now, they’ll wear out Rameer Nelson, who is on Rip Hamilton.” Yeah, he said ‘Rameer.’ I’d give Hubie sh*t for that, but I won’t because the exact instant he uttered that phrase, Rip Hamilton hit his second jumper of the game over Jameer’s not-nearly-outstretched-enough arm. And just to ensure the abundantly obvious remains so, Hubie says, “Now, Mike, he’s too big for him, he’ll just shoot up over the top.”

10:50: Chauncey, who is guarding Jameer on the other end, rips Jameer, then feeds Rip in transition, who feed Tayshaun Prince for the dunk. 6-0, Pistons. I feel I should mention, I’m not trying to hate on Jameer. He seems cool enough, and he’s turned into a pretty decent pro. But, to me, the idea of him trying to guard either of Detroit’s backcourt starters encapsulates why Orlando has no chance in this series. He’s not quite good or experienced enough to check either of those guys, and the same can be said for these teams in general.

10:25: Discussing how the Magic might have a prayer in this series, Hubie says, “Mike, this is about handling physical punishment.” It’s a nice reminder that, beyond their offensive efficiency, the best Pistons teams have historically always carried that aura that at any moment, they might just stop playing and collectively beat the sh*t out of the entire other team. You know they probably won’t, but you sort of don’t put it past them, either.

9:49: Webber gets called for a foul on Dwight, and he makes that half-angry, half-sad face that he’s been making at least since he was in college. CWebb makes great faces.

9:35: Dwight drives, misses, gets his own board and two-hands the put-back, 8-4. Tirico tells us that Dwight had 74 more dunks than any other player in the League this season. This information is both great and meaningless. Even to me.

8:31: Grant gets a one-on-one with Tayshaun and misses the layup. Had that matchup taken place 10 years ago, Grant definitely would’ve made it. And I say that with certainty, both because Grant was healthy then, and was such a great player, and also because Tayshaun was still in high school and weighed like 108 pounds.

8:20: Sheed hits a three. I was going to say it was a “wide-open” three, but that clichéd adjective wouldn’t have done justice to just how open he was. The entire Magic lineup appears to have left the building just before Sheed lined up his shot. It’s 13-4, Pistons.

7:58: Post-up, spin move… youch. Much in the same way Lauryn Hill once threatened to do to your microphone, Dwight defecates on Sheed, and it’s 13-6. It’s always weird when a guy dunks that nastily in a game you know his team’s going to lose. It’s like when a defensive back lays a decent hit on a wideout in the third quarter of a game his team is losing by three touchdowns, and then does some stupid shimmy to show what a bad-ass he is. It’s like, Yeah, you did your job, man, and you won that little battle, but you’re still gonna lose the war. To his credit, Dwight does not shimmy. He’s not that kind of guy.

6:08: Former Penn State women’s basketball player Lisa Salters tells us that the Magic knew the Pistons were going to bully them because “Darko Milicic told them.” As opposed to the rest of the planet, who figured it out by watching the Pistons on TV the past few years. This gives ABC an excuse to show Darko on the bench, and reminds me how much I miss that bleach-job he used to rock. Now his hair looks just like JJ Redick’s, and what’s good about that?

Anyway, it’s 16-8 Pistons midway through the first, and you and I both know where this is going. So I’m gonna fast-forward…

Halftime… congratulations, Trevor Ariza. You’ve made us think, just for a second, that your last-second layup might be the glimmer of hope the Magic need. The lead is eight, 51-43. I’m gonna hit the >> button
on my DVR remote now…

That Verizon Wireless commercial? With the mom dressed up as a taco? HILARIOUS.

1:20: Hedo Turkoglu hits a long jumper, and it’s a five-point game. Having already met my annual allotment of incorrect prognostications with that whole Greg Oden thing, I remain certain of this outcome. Hedo shouldn’t waste his energy.

1:03: Ok, NOW it’s entertaining—they blow Chauncey for an offensive foul after he got a little overzealous on a post-up and knocked Jameer on his ass. Great job by Nelson to sell it. It is, theoretically, a two-possession game. Orlando ball.

:52.0: What appears to be a broken play somehow leaves Dwight with the ball under the basket. Text-book two-hander follows and, yes, it’s a three-point game. Good grief. I still refuse to believe Detroit will actually blow this, but the fact that it’s in doubt is kind of interesting.

:37.4: Rip makes a great find on a cutting Tayshaun, who dunks, and-one. He misses the free throw, but still, it’s back to five with under 40 seconds left. They f*cked around, but they’re not losing this game. Obviously.

:26.6: Nice take, Grant. It’s back to three. I remain as certain as I can possibly be that the Pistons won’t miss enough free throws to make it matter.

Alright, we’re done. And what have we learned? Nothing we didn’t already know: The Pistons are clearly better than the Magic at four of five positions, and their collective postseason experience dwarfs Orlando’s. Barring season-ending injuries to at least two of Detroit’s starters, there’s no way this series goes past five.

And Detroit will win Game 2 by 19 points. I promise.