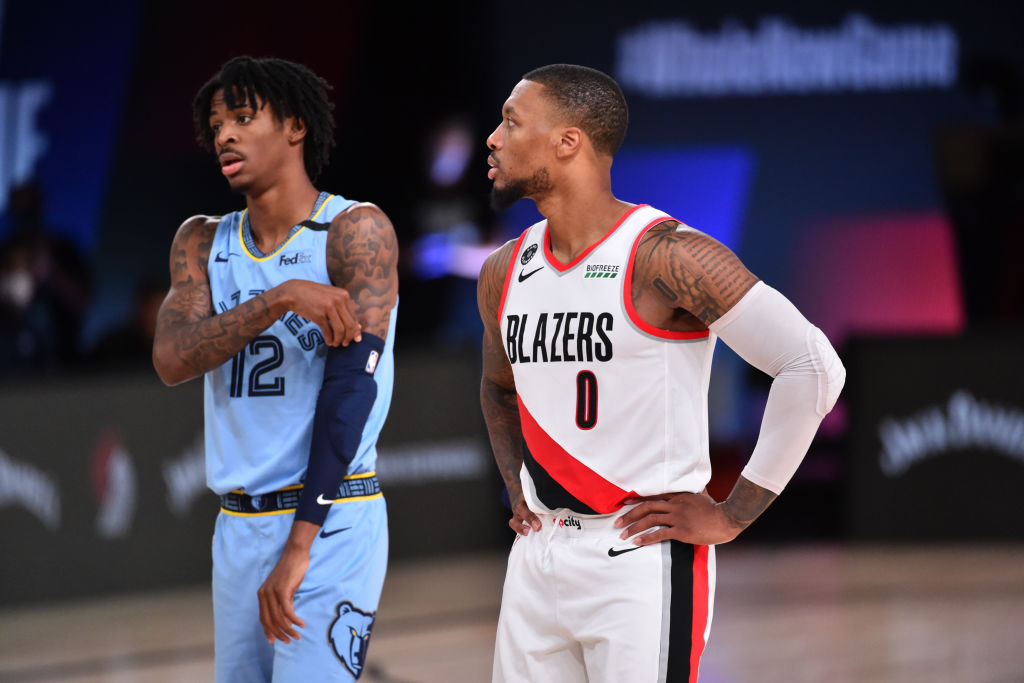 The Memphis Grizzlies and Portland Trail Blazers will take part in the NBA’s first postseason play-in tournament this weekend. The winner will lay claim to the No. 8 seed in the Western Conference and get the chance to try their luck in the official playoff bracket.

We’ve broken down how the two teams line up against one another now and how they’ve fared previously this season.

The Blazers will have the upperhand in the unprecedented battle given that they’ve now settled into the eighth-seed that had alluded them prior to the shutdown thanks to a sluggish start.

The Grizzlies, in contrast, have emerged from a cutthroat battle for the No. 9 seed and will need to steal not just one but two victories in order to advance.

The first game of the play-in tournament will take place on Saturday at 2:30 pm EST. If the Blazers win the tilt, they secure their spot in the bracket. If the Grizzlies win the first matchup, the clubs will play again on Sunday with the victor of that game earning the chance to move on.

Despite the teams both hailing from the West, they only lined up once in the 60-plus games before the shutdown. Memphis won their lone battle, a February 12th affair immediately before the All-Star break.

Rookie Brandon Clarke paced the Grizz in the victory but the Jusuf Nurkic-less Blazers weren’t as healthy then as they are now. It was actually in this pre-Valentine’s Day matchup that Damian Lillard suffered the groin injury that took him out of the forthcoming All-Star Game.

The Blazers and Grizzlies connected again in their first taste of bubble action after the four-month hiatus. Here Portland, now at close to full strength, outpaced Memphis in overtime thanks to big games from not only their star backcourt but veritable X-Factors like Carmelo Anthony and Gary Trent Jr.

Leading the way for Memphis in the loss was Jaren Jackson Jr. The unicorn chipped in 33 points, connecting on 6-of-15 threes but it wasn’t quite enough. Jackson Jr. played two more games before he was shelved for the remainder of the season with a torn meniscus.

The Grizzlies will be without Jackson Jr. in the play-in tournament and won’t get the opportunity to debut trade deadline acquisition Justise Winslow on account of a hip injury either. It’s unlikely that reserve guard Tyus Jones sees action as well, given that knee issues have kept him out of all the bubble games thus far.

The Blazers will continue to play without swingman Rodney Hood, who suffered a torn Achilles in the regular season and is nowhere close to returning to game action.

Why Root For The Grizzlies?

The Grizzlies have transitioned from their beloved Grit-n-Grind squad to one of the league’s most enviable young rosters in the blink of an eye and they’ve done so without fluke luck or any abnormally bold home run swings. Taylor Jenkins has built a winner out of a well-drafted, thoughtfully constructed roster in his first big league head coaching gig.

While the Grizzlies represent a responsibly executed rebuild, Morant deserves no shortage of attention for his role in dragging the Grizzlies into the playoff conversation. When future hoops fans look back on perennial All-Star Morant’s legacy, this campaign will be a major part of his origin story.

Why Root For The Blazers?

The beautiful thing about sports is that everything is earned and nothing given. Still, the mere concept of the Blazers not making into the playoffs just feels wrong. It’s hard to make a case that Portland isn’t a top-eight team in the West given that they made it to the conference finals last year. (Seriously, try it). It gets even harder when you consider the return of Nurkic to the lineup.

Portland’s arguably higher ceiling, then, could make for a more compelling first-round matchup with the Lakers. Throw in the side narrative of Anthony squaring off against long-time friend LeBron James in his bounce back campaign after years in hoops purgatory and it’s hard to resist.