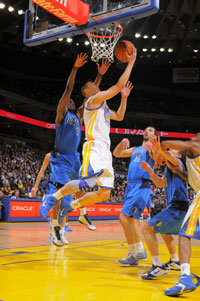 It was the second quarter of Saturday’s game against the Mavericks, and Jeremy Lin was about to learn whether he was in any way ready for the NBA.

The Warriors had lost their first three meetings with the Mavs — most recently by 38 points less than two weeks prior — and another blowout seemed imminent. Dallas was already leading, Stephen Curry was on the bench in foul trouble, and leading scorer Monta Ellis was nursing a sore ankle and needed a rest. Desperate for a spark, Warriors coach Keith Smart looked down to the end of the bench and called the name of his rookie point guard, who had recently returned from the D-League.

Lin’s journey to that moment on Saturday night was one of the most inconceivable in the recent history of the NBA.

Fans around the NBA are familiar with much of the story: This time last year, the Bay Area native was finishing his degree at Harvard. A couple months later, playing on the Mavericks’ summer league team — the only team that invited him to play — Lin used his solid 6-3, 200-pound frame to frustrate No. 1 overall pick John Wall, drawing the attention of the basketball world. Soon after, he signed a two-year deal with his hometown team, the Warriors. He was completely unprepared for what happened next.

“I had no idea,” he says. “No idea. Everything took me by surprise.”

Lin, whose parents are Taiwanese, was adopted by the Bay Area’s large Asian community, who began showing up to games wearing his jersey — and cheering deafeningly every time he was put into a game, no matter the score. More overwhelming was the coverage from the Asian press, who treated him as one of their own. A throng of Asian media constantly followed Lin, who until last summer had only visited Taiwan once, while in the seventh grade.

“My parents would speak to me in Mandarin, but I would respond in English,” he admits. “I’m a lot better listening to it than I am at speaking it. My Mandarin could definitely use some work. That’s something I’m going to work on in the offseason.”

Lin says his Asian heritage is important to him, but that he is a Christian first and everything else second. Amid the constant interviews with foreign media and TV, his teammates teased him lightheartedly about being more American than Asian.

But the flood of media coverage was the least of his worries — Lin was struggling, and would take more serious jabs from the other players. Away from the media, Smart instituted a rule during intrasquad scrimmages that no foul committed against Lin would ever be called.

“He’s tough as nails,” Smart says. “I thought it was necessary for him to understand that as a no-name guy, you won’t get any favors, so you’ve got to work through all that. And he’s done that.”

It wasn’t easy. Lin received limited minutes and seemed lost on the rare occasions he did play. He was eventually sent to Reno for two extended stints in the D-League, and Lin credits Bighorns coach (and former Warriors head coach) Eric Musselman for helping him regain the swagger he showed over the summer.

“When I was out there I was unsure of things, I didn’t know what to do and what my role was,” he says of his first games with the Warriors. “Now I’m a lot more comfortable, I’m more at ease when I’m on the court and I’m not in a rush.”

Lin proved that on Saturday. He quickly steadied the Warriors’ ship, competently managing the offense and making himself a pest on defense as he fought through every screen set for the Mavs’ dangerous guards. He also flashed some nifty ballhandling under pressure, and a quick first step that led to a reverse layup which got the home crowd back in the game.

The Warriors fell behind by 10 immediately after Lin came in, but when he exited 6:47 later with 4 points and an assist they were only down 1, and rode the momentum to an upset victory.

At the beginning of the season, Lin’s exploits would have precipitated a media fracas, but on Saturday, his short but impactful run was barely noticed amid a 32-point night for Ellis and the general excitement of the win.

“This season started off with a lot of media, but as I struggled a lot of that went away,” he said, with barely a trace of regret. “That’s just the way it goes.”

Fortunately for Lin, his strong play made a bigger impression on his coaches.

The next morning, Smart met the media while his players participated in an optional workout with the team’s assistants. As if on cue, Lin, on the far side of the court, was scurrying around the arc shooting three pointers just as Smart was saying he would see more playing time over the last few games of the season.

“He can look at himself and say he’s proven that he can play in the NBA,” Smart said.

— This summer Nike is sponsoring Lin on a trip to Asia, where he hopes to converse with fans — in Mandarin.

— Al Thornton’s length and athleticism are helping the Warriors, and he’s also likely to see playing time over the last few games of the season.