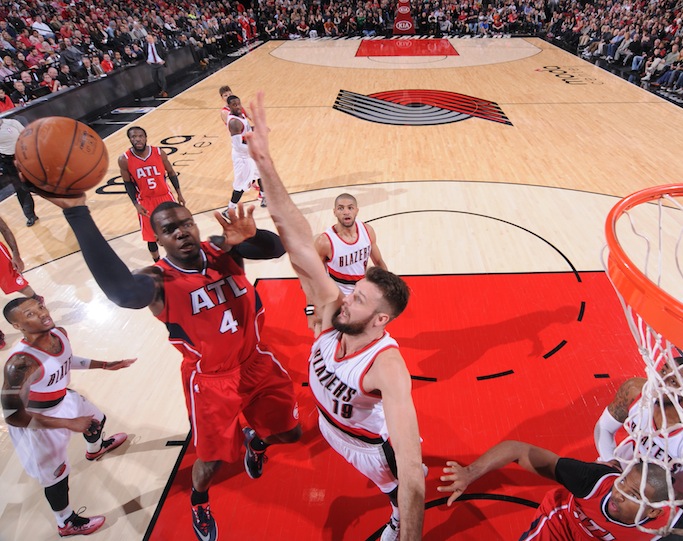 The Hornets found a way to break their five-game losing streak thanks to a monster second quarter. During a ten minute span to finish the first half, Charlotte dominated Orlando with a 30-9 run, leading 52-29 going into halftime. With Al Jefferson and Lance Stephenson still sidelined, Kemba Walker (30 points, 6 assists, 7 rebounds, 2 steals) took over this game and established himself as the primary offensive option. Michael Kidd-Gilchrist (17 points, 7 defensive rebounds, 5 offensive rebounds) had a big double-double and was tenacious on both sides of the court. The Magic were led by  their big three of Victor Oladipo (21 points, 5 assists), Nikola Vucevic (20 points, 10 rebounds, 2 blocks) and Tobias Harris (18 points, 11 rebounds), but didn’t get much help from their teammates. Evan Fournier (9 points, 4-15 from the field) couldn’t find his touch, as the the Magic only shot 37.9 percent from the field.

Trey Burke (season-high 28 points, 6 assists, 6 rebounds, 10-16 from the field) came alive from deep to help the Jazz roll over the defenseless Timberwolves. Going into this game, the Jazz guard had shot 4-27 (14.8 percent) from deep the past two games. Saturday night, he made four of his six 3-point attempts, torching the Wolves with his jumper. Rudy Gobert (13 points, 11 rebounds, 6 blocks) had a hot start and finished with a solid line. His length can really become a problem down low for opponents if the Jazz big man can find a comfortability in this League. Mo Williams (20 points, 3-5 on 3-pointers) and Andrew Wiggins (20 points) both reached the 20-point plateau, but offense isn’t really the problem in Minnesota. This team simply doesn’t play defense, allowing most opponents to reach 50 percent shooting from the field—including the Jazz (50.7 percent). The Wolves have now last 11 in a row and 17 of their last 18.

Just five games into being with the team, Josh Smith’s (12 points, 7 rebounds) promise of being in Houston’s starting lineup has been broken. With Smith on the bench, Donatas Motiejunas (12 points) was back in the starting lineup and consequently got off to a hot start. The Rockets were led by their All-Stars in Dwight Howard (23 points, 13 rebounds) and James Harden (28 points, 5 rebounds). Howard pushed the Rockets forward in the second quarter, when he posted 19 points and helped his team build a double-digit lead. This one ended up being the Rockets’ largest win of the year. The Heat simply looked exhausted and warn down in this one, as Chris Bosh (15 points, 4 rebounds) and Dwyane Wade (15 points, 4 rebounds) led the team in scoring. These two also had six of the team’s 22 turnovers. Miami has now lost four games in a row, seemingly showing the roster’s age and wear-and-tear.

It might have been more difficult than they expected, but the Bulls found a way to pull out the victory thanks to three crucial overtime layups from Kirk Hinrich (8 points, 0-6 on 3-pointers), Pau Gasol (29 points, 16 rebounds, 5 blocks) and Derrick Rose (12 points, 5-18 from the field). Gasol had a fantastic game down low, taking it to the Boston frontline. Aaron Brooks (19 points, 4 rebounds) finished with his second best output of the season—right behind his best performance (26 points), which came in November…against the Celtics. Joakim Noah (8 points, 12 rebounds, 6 assists, 3 steals, 2 blocks) had a classic Joakim Noah game in which he did a little bit of everything on both sides of the court. With no Rajon Rondo anymore, Evan Turner (29 points, 6 assists, 5 rebounds, 7 turnovers) took the opportunity to have one of his best games of the year. Turner reminded everyone that he was once a dependable scorer for the Sixers before his dramatic decline with the Pacers. Jared Sullinger (16 points, 8 defensive rebounds, 8 offensive rebounds) had a big double-double and Jae Crowder (10 points, 2 steals) reached double figures for the third time since joining Boston. The Celtics lost this one at the line, as the Bulls shot 29-40 (72.5 percent), incessantly attacking the rim. Boston only attempted 11 free throws. Jimmy Butler didn’t play due to a death in the family.

The Spurs picked up their second straight win for the first time since December 5 and 6 while the Wizards lost their third straight game for the first time all season. These two teams showed superior balance as they both had six players in double figures and no one reach 20 points. Cory Joseph (19 points, 4 assists, 4 rebounds) continued to come up big with Tony Parker still sidelined. The young point guard is starting to look for his teammates more and become a better distributor. It’s honestly just as much a testament to Popovich’s system as it is to Joseph’s growth. Patty Mills (15 points, 3-5 on 3-pointers) also hit some big shots in the fourth quarter. Guards John Wall (15 points, 8 assists) and Bradley Beal (15 points, 2-3 on 3-pointers) led the way for the Wizards, but went into a scoring drought late in the game. The run that changed this game’s momentum, though, came at the end of the third quarter when San Antonio closed it on a 12-4 run. The Spurs have now won 17 consecutive games against the Wizards—in large part due to their efficient shooting. They shot 55.1 percent from the field.

The Denver Nuggets snapped a three-game skid in a huge way by clobbering the Grizzlies in the Mile High city. Ty Lawson (25 points, 11 assists, 5 rebounds, 2 steals, 2 blocks) had another big games, thanks to his finding his touch early on. During a great first half for the Nuggets, Lawson made five shots—all jumpers—in pushing his team to a 49-38 lead. He distributed the ball throughout the game. Arron Afflalo (23 points, 8-12 from the field) had his shot going as well. Rookie Jusuf Nurkic (11 points, 10 rebounds, career-high 5 blocks) had one of his strongest defensive performances of the game. The Grizzlies just looked worn down having to play in the high altitude of Denver on the second night of a back-to-back. Mike Conley (8 points, 5 assists, 4-11 from the field) played a sloppy game, and it showed with the rest of his teammates. The Grizzlies only shot 2-14 (14.3 percent) on treys while the Nuggets controlled the boards 48-37.

The new top team in the East added to their lead with yet another quality win—this time against a top team in the West. The Hawks actually had this one well within hand as they led 106-91 with 3:26 left in the game. With the Hawks making their free throws in the final minute, they were never really in trouble of letting the Blazers coming all the way back. Seven of the nine Hawks that entered the game reached double digits and they all played key roles in the win. These Hawks players have seemed to quickly understand and accept their roles. They’re buying into a system and are one of the best teams in the league because of it. Jeff Teague (22 points, 6 assists) and Paul Millsap (27 points, 6 rebounds) have become one of the best one-two punches in the League while Kyle Korver (14 points, 8 rebounds, 4-9 on 3-pointers) remained hot from deep. The Blazers got a big game from LaMarcus Aldridge (30 points, 12 rebounds, 2 blocks), but Damian Lillard (16 points, 7 assists, 8 rebounds) and Wes Matthews (19 points, 4-11 on 3-pointers) combined to shoot 12-33 (36.4 percent) from the field. Yet again, the Hawks found a way to shoot about 50 percent from the field (51.2 percent).

Nothing new to see here, just another poor defensive performance from the lowly Sixers. The Clippers built up a 34-21 lead after the first 12 minutes and eventually poured it on in the fourth quarter in outscoring Philly 39-17. Chris Paul (24 points, 12 assists, 8 rebounds) led the way with a commanding double-double as the Clippers had 10 players with at least seven points. When Los Angeles has this type of balanced scoring across the board, it’s hard for anyone to stop them—especially when CP3 is getting his teammates the ball where they’re most comfortable with it. The Clips shot lights out from all over the field, shooting 54.1 percent from the field and 15-37 (40.5 percent) on 3-pointers. Tony Wroten (27 points, 7 assists) and Robert Covington (23 points, 4-7 on 3-pointers) led the Sixers in scoring. No team comes close to turning the ball over as much as Sixers this season, and they coughed it up 21 times, while the Clips only had eight turnovers.