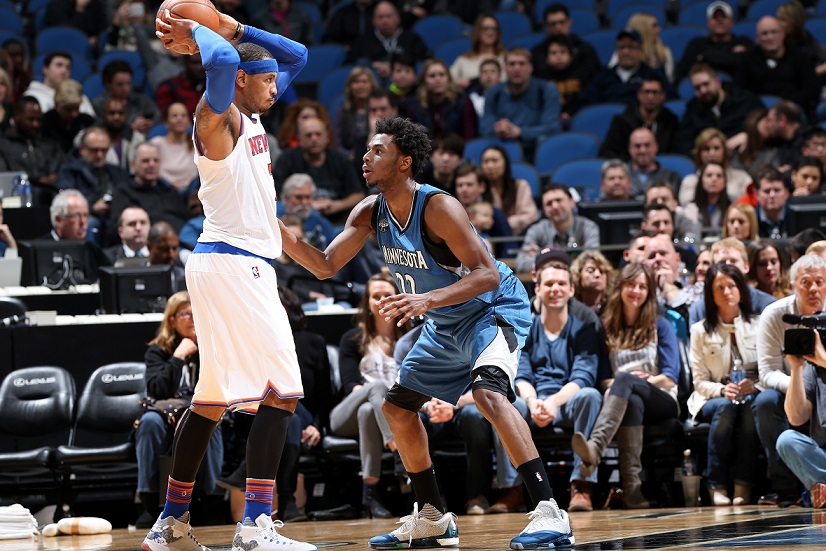 Entering Saturday’s contest saddled with a seven-game losing streak, Carmelo Anthony put the Knicks on his back with a 30-point, 11-rebound effort — eclipsing 22,000 career points in the process. Dominant as ‘Melo was, he met a game adversary in Andrew Wiggins; the youngster scored 24 points in what proved to be an engaging duel. The W was Kurt Rambis’ first as interim coach of the Knicks — Rambis endured a brutal 32-132 run as T’Wolves head coach in the 2009-10 and 2010-11 seasons. Despite getting called up to the big show, former college standout Jimmer Fredette was unable to receive court time from the Knicks’ bench.

Carmelo on Jimmer: "To be honest with you I haven't seen Jimmy play in a long time."

In his return from a one-game suspension, Hassan Whiteside proved to be the difference in Saturday’s victory over the Wizards. Whiteside, who was sidelined for his role in an altercation with Boban Marjanovic, recorded an incredible double-double in just under 30 minutes of court time. Apparently in a giddy mood, Whiteside had this to say of teammate Josh McRoberts after the game:

Hassan Whiteside: "Josh McRoberts is our version of Draymond Green."

Washington had no answers for the Chris Bosh and Dwyane Wade-less Heat — a rare off-night for John Wall (5-of-17 from the field) impacted the team, as the Wizards shot a dismal 13.6 percent from downtown. If things don’t turn around quickly, coach Randy Wittman could find himself back on the hot seat.

The Hawks displayed immense heart in Saturday’s defeat, utilizing clutch buckets from Dennis Schroder and Al Horford to force double-overtime at home. Jabari Parker was on a mission, however, as the former Blue Devil torched Atlanta for a career-high 28 points with 13 rebounds. Greg Monroe and Giannis Antetokounmpo also helped the cause with double-doubles. Kirk Hinrich, re-acquired from the Bulls at the trade deadline, didn’t crack coach Mike Budenholzer’s rotation in the double-OT loss.

After an embarrassing loss to Damian Lillard and the Trail Blazers on Friday, the Warriors rebounded to take care of business against Chris Paul (24 points), DeAndre Jordan (16 points, 21 boards), Jamal Crawford (25 points), and the Clippers. While a late run from L.A. likely made this game closer than it needed to be, Draymond Green stole the show with his league-leading 11th triple-double. The Splash Brothers dropped a combined 55 points in Golden State’s starting unit, all but spelling doom for the Clippers. If nothing else can be taken away from Saturday’s defeat, the Clippers got their first look at Jeff Green- an intriguing player acquired in exchange for Lance Stephenson, who never found a true role in coach Doc Rivers’ rotation.