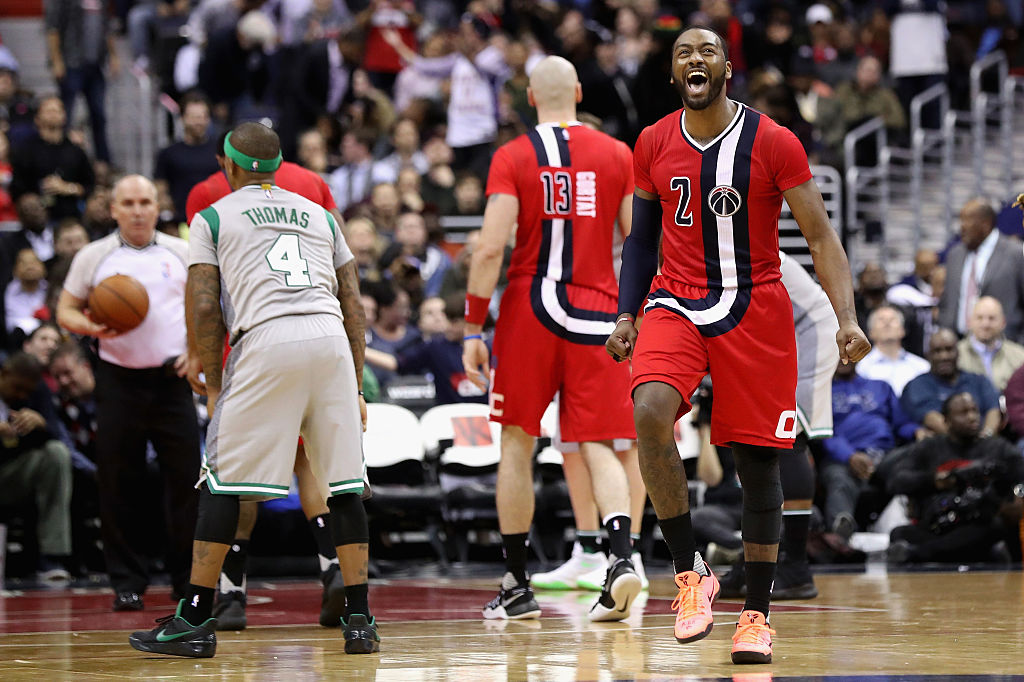 John Wall and the Wizards put pressure on themselves leading up to Tuesday’s match-up, dressing up in all black for what the team deemed a “funeral game.”

Isaiah Thomas, who wasn’t amused with Washington’s antics, dropped 25 points with 13 dimes while Al Horford added 22 points. The Wizards, however, controlled the action with 66 first half points. Bradley Beal erupted for 13 fourth quarter points (31 overall) as the Wizards pulled away for their 14th straight win at home. Marcus Smart reached his boiling point by the end of regulation, snapping at assistant coaches.

An irate Marcus Smart whipped his towel at Celtics coaches at the end of Tueday's loss. https://t.co/ZCCWlrYNwH pic.twitter.com/DArjhFckRR

Dwyane Wade fired warning shots early Tuesday that he may not re-sign with the Bulls if they kept up their pedestrian play.

“I wouldn’t lie to you and say no. Of course,” Wade said, when asked if continued mediocrity would influence his decision. “I can’t play this game forever. I just turned 35 and I have a number in my head on how long I want to play. I take my career seriously and where I am and where I want to be. And I will do the same thing this summer.”

Wade’s supporting cast responded well to his remarks, as Jimmy Butler scored 20, and Cristiano Felicio double-doubled in a stellar win over the Magic. Bulls coach Fred Hoiberg altered his rotation, giving Jerian Grant a starting role and having Rajon Rondo serve as his back-up.

Toronto gave the short-handed Spurs a run for their money, as Kyle Lowry dropped 30 points and Terrence Ross added 21 in a close loss. The Raptors, who were playing without DeMar DeRozan, have now dropped four straight and lost 19 of their last 24 games against the Spurs.

The Clippers were flying high at halftime, staked to a 68-59 lead in Blake Griffin’s return game. The Clippers were able to complete a stunning comeback, however, erasing a 19-point third quarter deficit before a capacity crowd of 17,591. Richaun Holmes tallied a career-high 18 points and Nerlens Noel added 19, filling in admirably for the injured Joel Embiid.

Ricky Rubio recorded a double-double with 14 points and 10 dimes. The Timberwolves are reportedly shopping Rubio, and have a crowded depth chart in the meantime; despite finishing with a +22 in Sunday’s game, Tyus Jones received a DNP against Phoenix.

Nikola Jokic stuffed his stat sheet; scoring 23 points with 11 boards, six dimes, three blocks, and a pair of steals in Denver’s upset win over the Jazz. The Nuggets, who have now won five of their last seven, received a stellar performance off the bench from Darrell Arthur, who drained three treys in a 16-point night. Derrick Favors and George Hill had 18 and 17 points, respectively, while Boris Diaw scored a season-high 16 points.

Really good chance this will be the last time in Jazz franchise history they ever play 4 games in 5 nights. #progress #newschedule