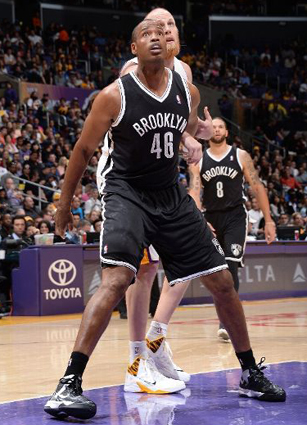 Kevin Durant (42 points, 10 assists) might have put on another show, but Jamal Crawford (36 points, 13-20 from the field) hit the big-time buckets when his team needed it most. Durant got the first 40-point, 10-assist game of his career, playing the role of facilitator early on. He had 4 assists in the first quarter. The Clippers, though, would go on to score 44 points in the 2nd quarter and take a 72-66 lead into halftime. Matt Barnes (24 points, 7 rebounds) made back-to-back 3-pointers to start the game and remained a threat from deep all night. He finished with a season-high 6 3-pointers. Blake Griffin (20 points, 7 rebounds, 6 assists) and Chris Paul (18 points, 12 assists, 8 rebounds) both somewhat flirted with triple-doubles and combined to shoot 8-8 on free throws down the stretch. When these two weren’t knocking down free throws, Crawford was taking and making tough shots. The is the Thunder’s season-high for points given up in a game as they have lost two games in a row coming out of the All-Star Break. OKC just couldn’t slow down the Clippers’ rapid pace, as L.A. had a 34-17 advantage in fast break points. They shot 13-14 from the field when in transition. The Clippers are now 24-0 when they knock down at least 9 3-pointers.

No LeBron, no problem. With LeBron James sitting out due to a broken nose, Chris Bosh (28 points, 10 rebounds) and Dwyane Wade (23 points, 10 rebounds, 7 assists) took control of the game and put it away in the 3rd quarter. The Heat outscored Chicago 25-12 during these 12 minutes and led 65-52. After a Wade layup 3 1/2 minutes into the 4th quarter, Miami led by a game-high 19 points. The team would lead by double-digits the rest of the way. Greg Oden (5 points, 5 rebounds) started for the first time since December 5, 2009. Big men Joakim Noah (20 points, 15 rebounds) and Taj Gibson (20 points, 10 rebounds) each put up double-doubles but without Jimmy Butler (ribs), the Bulls just didn’t have enough playmakers to put up points against the athletic Heat defenders. D.J. Augustin (2 points, 5 assists, 0-10 from the field) had one of his worst games as a Bull, failing to find his touch for 36 minutes of playing time. The Heat forced the Bulls into seven—count ’em, seven—24-second shot-clock violations, as Chicago lacked much ball movement. James will now get the chance to rest until the Heat’s next game against the Knicks (21-35) Thursday night.

Winners of now three games in a row, Washington got big games from John Wall (21 points, 9 assists, 1 turnover) and Bradley Beal (17 points, 5 rebounds), a small backcourt that is really starting to mesh. Their Wizards went on a 12-0 run midway through the 1st quarter and never lost the lead the rest of the way. After a six-game winning streak, the Cavs have now lost two straight. During these two losses, Kyrie Irving (15 points, 5 assists, 5 rebounds) is shooting 9-33 (27 percent) from the field. Sunday night, the Cavs could only manage 31 points in the 2nd half and 11 points in the final 12 minutes. The Wizards were able to hold down the Cavs in the 4th quarter without Nene (8 points, 4 rebounds, 4 assists), who left in the 3rd quarter with a sprained left knee. Luol Deng (17 points, 7 rebounds) and the Cavs went into the game with plenty of injured players as Anderson Varejao (back), Dion Waiters (knee) and CJ Miles (ankle) all didn’t play. Cleveland stuck around for the majority of the first three quarters, but the Wizards took control in the 4th quarter thanks to an 11-3 run over the course of five minutes. Marcin Gortat (13 points, 13 rebounds) added a double-double while his team had a 26-15 advantage in assists. In his second game since joining the Cavs, Spencer Hawes (16 points, 12 rebounds, 4 assists) had a double-double as well.

The Raptors have had the Magic’s number of late, winning the last six matchups. Kyle Lowry (28 points, 6 assists, 4 rebounds, season-high 7 turnovers) and the Raptors came out of halftime firing away, outscoring the Magic 36-24 in the 3rd quarter. Lowry scored 17 of his points in the quarter while Tobias Harris (28 points, 6 rebounds, 10-15 from the field) only had two of his points. Lowry and DeMar DeRozan (24 points) combined to shoot 9-9 from the field and 4-4 on 3-pointers during the 3rd quarter. E’Twaun Moore (16 points) and the Magic trailed by double-digits the rest of the way. The Raptors shot 52.3 percent from the field while holding the Magic to only 41.4 percent shooting. Led by Amir Johnson (12 points, 8 rebounds) and Jonas Valanciunas (7 points, 9 rebounds), the Raptors had seven players with at least 4 rebounds as the team outrebounded Orlando 50-32. Toronto overcame 23 turnovers by shooting the ball so well. The Raptors are now three wins away from matching their win total from last season.

The new Kings big 3—Isaiah Thomas (33 points, 6 assists, 4-5 on 3-pointers), Rudy Gay (32 points, 11 rebounds) and DeMarcus Cousins (27 points, 9 rebounds, 5 assists, 5 blocks)—had quite possibly their best overall game since coming together. Thomas controlled the pace, Gay had his jump shot going and Cousins controlled the paint. They also combined to shoot 32-55 from the field (58.2 percent). Along with Derrick Williams (2 points, 2 rebounds), if the Kings can keep these four players, that is a young core that has potential to make the Kings much greater than the worst team in the West. Kenneth Faried (10 points, 6 rebounds) and Timofey Mozgov (6 points, 4 rebounds) scored 15 of the first 17 points for the Nuggets, as they held a 17-12 lead. Evan Fournier (27 points, 5 assists, 4 rebounds) then went on to score 12 of the next 15 points for Denver to end the quarter. The 2nd quarter featured more scoring from Fournier as the Nuggets took a 52-48 lead into halftime. Then the Kings took over. Despite Randy Foye (27 points, 6-11 on 3-pointers) heating up for 14 3rd quarter points, the rest of his team only managed 4 points during the 12 minutes. Led by their big 3, the Kings poured on 39 points, taking an 87-70 lead into the final quarter and putting it away for good. The Kings overcame 15 3-pointers from the Nuggets by incessantly attacking the paint, leading to 30-36 free throw shooting. In his second game with the Nuggets, Aaron Brooks (9 points, 8 assists) fit fairly well into Brian Shaw’s system, but the team has now lost seven of their last eight games—with their lone win coming against the Bucks.

After being signed this morning, Jason Collins (2 rebound, 5 fouls) entered the game against the injury-ridden Lakers with 10:28 left in the 2nd quarter. Throughout his career, he has done the little things well, such as setting solid screens, boxing out and committing hard fouls. Even though he looked rusty, he found a way to do many of these things Sunday night. If he can continue to do this during the duration of his 10-day contract, Brooklyn might keep him around. Paul Pierce (25 points, 7 rebounds, 4 assists, 4-7 on 3-pointers) and Deron Williams (season-high 30 points, 7 assists, 6 steals, 11-13 on free throws) looked liked the players they were a few years ago, being forces offensively. Pau Gasol (22 points, 11 rebounds) is still somehow wearing purple and yellow and led the Lakers Sunday night. Jodie Meeks (19 points) shot the ball well while Kent Bazemore (17 points) has shown he will be much more for the Lakers than a good celebrator on the bench. He seems to fit well into Mike D’Antoni’s system. Nick Young (10 points, 19 minutes) played for the first time since February 5. With Kevin Garnett resting, Andrei Kirilenko (10 points, 10 rebounds, season-high 4 steals) took advantage of his extended minutes, getting his first double-double of the season. Pierce and Kirilenko scored the first 7 points of the game as Brooklyn jumped out to a 33-21 lead by the end of the 1st quarter and led wire-to-wire the rest of the way. The Lakers actually shot better from the field, had more points in the paint and had more fast break points. But the Nets shot 12-25 (48.0 percent) on 3-pointers and 24-32 (75.0 percent) on free throws. They also had a 28-17 advantage in assists. Marcus Thornton (food poisoning) still hasn’t played for Brooklyn since being traded to the team before the deadline. With the win, the Nets moved from eighth to sixth in the East and are a game back of the Wizards for the five seed.

Patrick Beverley (20 points, 3 steals) played the role of hero for the Rockets, knocking down the go-ahead 3-pointer with 34.3 seconds left in the game that gave Houston a 111-110 lead. After Goran Dragic (career-high 35 points, 14-20 from the field) made a lefty layup with 14.7 seconds to go, there was a controversial play at the free throw line. The Suns fouled Donatas Motiejunas (7 points, 5 rebounds) to send him to the line for two free throws. After Motiejunas hit the first one, as he began his motion to shoot his second, Dwight Howard (25 points, 9 rebounds, 2 blocks) took two or three steps over the line…and didn’t step back. Even though the referees usually don’t call lane violations, especially late in the game, this one was egregious enough that it should have been called. The Rockets still had a phenomenal final seven minutes, going on a 26-14 run during this span. Scoring 26 points in seven minutes is the definition of explosive. Beverley also scored 12 of his 20 points during his team’s blitz to the end of the game. James Harden (23 points, 7 assists, 5 rebounds, 9-9 on free throws) was up to his normal tricks, getting into the lane and getting to the free throw line. Gerald Green (23 points) and Markieff Morris (21 points, 7 rebounds) gave Dragic some support on his career night, but it wasn’t enough dow the stretch. The Rockets controlled the interior, outscoring the Suns 64-42 in the paint. Houston is now two games behind San Antonio for the two seed in the West.

Damian Lillard (32 points, 5 assists, 11-17 from the field) recorded his 13th 30-point game of his career and the eighth this season. Being without teammate LaMarcus Aldridge (groin) for the third straight game, Lillard was the offensive force all night long with Ricky Rubio (5 points, 11 assists) and the rest of the Wolves guards unable to contain him. Kevin Love (31 points, 10 rebounds) had a team-record fifth straight game with at least 30 points…but he only had offensive support from JJ Barea (21 points, 4-8 on 3-pointers). Even though he was without teammates Nikola Pekovic (ankle) and Kevin Martin (thumb) Sunday night, Love still has had too many games this year with only one or two players being a viable option on the offensive end of the floor. Dante Cunningham (12 points, 6 rebounds) was the only other Timberwolves player that scored in double-figures. Lillard had plenty of support from Nicolas Batum (22 points, 10 rebounds, 4 assists, 3 blocks), Wes Matthews (17 points, 3-6 on 3-pointers) and Thomas Robinson (14 points, career-high 18 rebounds). Robinson’s play down low sparked a second-half comeback for Portland. After two Barea free throws with 5:16 left in the 2nd quarter, Minnesota led 52-34. The Blazers went on to cut the deficit to 8 points by halftime and then outscored the Wolves 32-20 in the 3rd quarter. Minnesota only managed 3 fast break points on the night, compared to 19 for the Blazers.