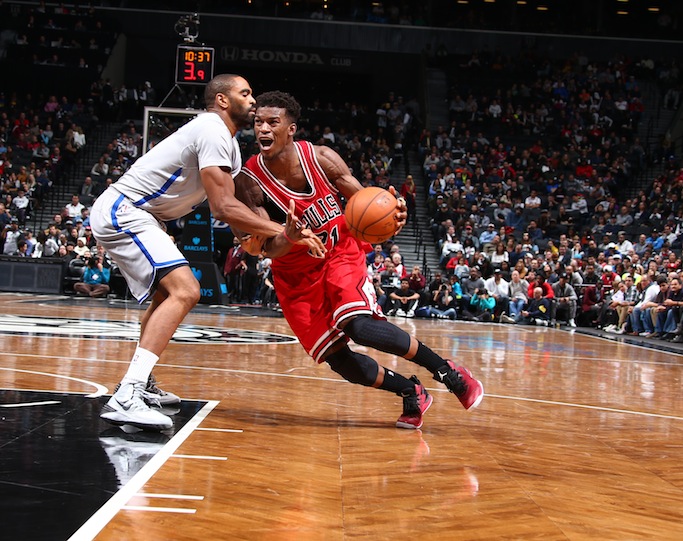 Jimmy Butler has quietly grown into one of the League’s best two-way shooting guards. Yesterday, he buried the Nets with 26 points (7/12 overall, 11/13 from the line), and added 5 boards, 5 assists, a steal and no turnovers. His defense has always been strong, and he suddenly ranks fifth in the League in free throws made and attempted. He trails only James Harden and Kobe Bryant in scoring at his position.

The Nets were outscored in each quarter last night, an impressively lame feat, especially when playing at home at full strength. Deron Williams (3/12), Brook Lopez (2 rebounds, 5 fouls in 22 minutes), Joe Johnson (1/7), Kevin Garnett (3/7)…. you get the idea.

Boston hung with the Spurs for much of this game — as they’ve done most games — but got blown away in the second half. Danny Green knocked down 4 threes and finished with a team-high 18 for San Antonio. Boris Diaw chipped in 15 with 7 boards, and the team also got nice contributions off the bench from Aron Baynes (13 & 5) and Corey Joseph (8 & 4).

Detroit led after the first quarter yesterday, but Golden State caught fire right before halftime and carried a double-digit lead into the break. The Pistons never really got back in the game.

Draymond Green continued his amazing season with 20 points (5 threes) and 6 boards. He’s picked up extra minutes with David Lee sidelined, and has developed into an awesome wild card for the Dubs. Stephen Curry (16 and 10) and Marreese Speights (11 and 12) both double-doubled in the win. The Warriors, who have arguably the best home crowd in the League, are now 9-1 on the road.

Detroit got 23 points from Kentavious Caldwell-Pope and 22 from Brandon Jennings, but still only shot 36 percent from the field. Andre Drummond (1/8, 2 points, 4 fouls in 24 minutes) and Josh Smith (6/18) had something to do with that, as did a poor showing from the bench. Though he struggled with his shot, Smith narrowly missed a triple-double with 14 points, 12 assists and 9 boards, and also tallied 4 steals.

Considering Sacramento was down its star player against the bullies of the NBA, they played pretty well last night. Sacto was within three points with 6:30 to play, but Memphis closed the game on an 18-9 run to ice it.

If a losing player can be a game’s MVP, it was Reggie Evans, who hit 7/10 shots and finished with 17 points and 20 boards, including 9 on the offensive glass. Not bad for a dude who logged a DNP-CD on Friday night.

Rudy Gay (20), Darren Collison (16, 7 and 7) and Ben McLemore (18) all played well for Sacto, too. McLemore has come on strong this year after an up-and-down rookie campaign, averaging around 11 points per contest on 47 percent shooting.

If Evans is getting a losing-effort MVP, then Amar’e Stoudemire is, too. The Knicks were just awful last night before STAT entered the game and fired up the crowd with a few vintage jams. His energy kept New York in the game, and he finished with 19 and 12 (7 offensive rebounds, one Chris Bosh poster).

Unfortunately, his supporting cast is still made up of players employed by the Knicks. Carmelo Anthony shot 11/26 while admirably fighting through a bad back. Iman Shumpert (3/13), Tim Hardaway Jr. (1/5, one costly miscue late), and Samuel Dalembert (1/6) all struggled in significant minutes, which is to say nothing of JR Smith’s night (0/4, 6 minutes). New York hit 3/24 from downtown.

The good news for anybody who had to watch this game was that Dwyane Wade turned in an old-school performance in 32 minutes, scoring 27 points on 11/18 shots, including a few back-breakers in the fourth quarter. Chris Bosh added 20 and 9.

Orlando’s record is nothing special, but they’ve got a lot of talented players and a handful of them showed up in Phoenix last night. Tobias Harris led the way with 21 and 8, and looks like a strong early candidate for Most Improved this season. Nik Vucevic posted 18 and 8, and Evan Fournier added 15. That core accounted for Orlando’s final 14 points in the win.

Phoenix got sweet games from Goran Dragic (22 and 8) Markieff Morris (18, 10 and 7), but they couldn’t make up for poor play in the first three quarters, in which they scored just 58 points.

Minnesota jumped ahead early on last night before Portland did Blazers-at-home stuff and pulled away. LaMarcus Aldridge paced the winning team with 26 and 15, and Wesley Matthews knocked down 6 treys on his way to 23 points. Damian Lillard added 17 and 8. Allen Crabbe played 18 minutes and sparked the team during a late first-half run.

Minnesota played a solid game, though, and got nice contributions from a few guys. Shabazz Muhammad erupted for 28 points on 12/17 shooting, and Mo Williams dropped 21 and 11 after going for 25 and 11 against the Lakers on Friday. Gorgui Dieng scored 11 points with 8 rebounds.

It took five periods to get there, but Kobe Bryant recorded a huge triple-double last night: 32 points, 11 boards and 12 dimes. The Mamba committed just two turnovers and nearly made half of his shots (11/24). More importantly, he got hot down the stretch and kept LA in the game, though he missed a late free throw that could have sealed a win in regulation.

His teammates — namely Wes Johnson and Jeremy Lin — stepped up in OT. LA scored 20 points in just those five minutes, and the Lakers hung on for their second home W of the year.

On the bright side for Toronto, its offense looked fine without DeMar DeRozan. Kyle Lowry scored a team-high 29, and Terrence Ross (8/12, 20 points), Greivis Vasquez (19 points while starting at SG) and Lou Williams (19) all stepped up in a big way. It looks like they’re deep enough survive DeRozan’s injury, though objects facing the Lakers’ “defense” are often worse than they appear.