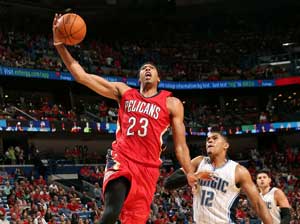 Last night was the night—Opening Night. First three games of the 2014-15 NBA season are officially in the bag, and there’s already so much to talk about. Welcome back, everybody. (To the regular NBA season, that is. We know you were here on SLAMonline throughout the off- and preseason—y’all rock).

Is there a better way to begin the season? A ring ceremony concluding with the revelation of your fifth Championship banner, followed by a win in a down-to-the-wire game against a division rival. Yeah, no. It doesn’t get much better.

Fans witnessed typical Spurs basketball in San Antonio last night—finding the open man to shoot efficiently (53 percent from the field), a solid Timmy Duncan double-double (14 points and 13 boards), an explosive Manu Ginobili off the bench (20 points), and a clutch Tony Parker whose 3-pointer with just over a minute left in the 4Q sealed the Spurs’ win. ‘Twas a nice time for the Spurs and their fans.

The new-look Mavs team wasn’t too shabby either. Nowitzki finished with 18 and Ellis with 26 points, 6 assists and 4 boards. They almost had the game when Dirk sank a three…but Tony answered back with his triple, and Chandler Parsons’ shot attempt to win it in the final seconds fell short.

Hello, Anthony Davis! Stat line easily goes to the 21-year-old star, who had a near triple-double on opening night. With 26 points, 17 rebounds and 9 blocks (not to mention 3 steals), he became one of three players (the other two being Shaq and Tim Duncan) since 1985 to record 20+ points, 15+ boards and 8+ blocks before the ripe age of 22. We’re witnessing history here, people!

Newly acquired Pelican, Omer Asik, finished with his own double-double of 14 points and 17 rebounds. And to think these two guys weren’t even the game leaders in boards—the Magic’s Nikola Vucevic snagged 23 of them rebounds.

Orlando kept the game close with guys like Tobias Harris putting up 25 points, before New Orleans pulled away for good in the fourth.

One man back, another man gone.

In Kobe Bryant’s return to the basketball court last night, the Houston Rockets blew out his Lakers in their own house. What made it worse—L.A.’s lottery pick, Julius Randle, suffered a broken leg and had to be rolled off the court.

The Black Mamba put up 19 points, 3 boards and 2 assists in his first game back, but James Harden and the Rockets stole the show. Harden had the game-high 32 points to go along with 6 assists. Needless to say, there were a number of #BeardAlert tweets sent out last night.

Terrence Jones, Trevor Ariza and Dwight Howard all contributed double digits for the Rockets as well, resulting in a smooth and satisfying road victory.

Games almost every night from here on out. Basketball is back!