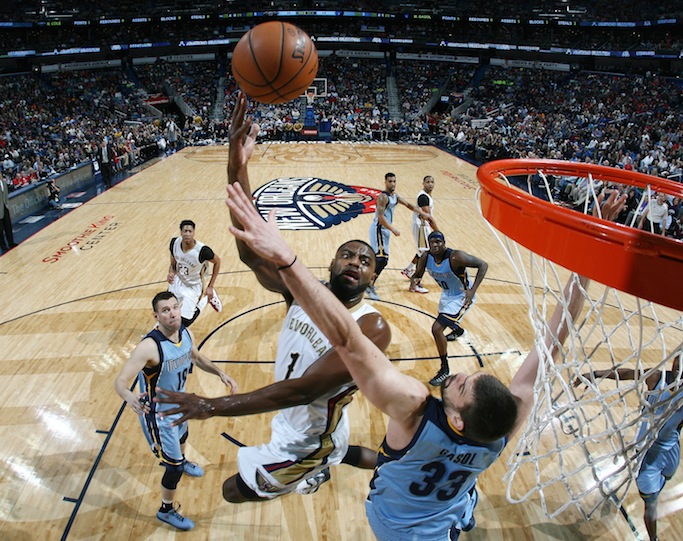 After back-to-back layups from Jeff Green (20 points) midway through the second quarter, the Pelicans were facing an 18-point deficit against one of the best teams in the League. On top of this, with the Grizzlies’ stout defense, they rarely give up big leads down the stretch. But coming out of halftime still behind by double-digits, Tyreke Evans (26 points, 7 assists, 3 steals) and Anthony Davis (23 points, 10 rebounds, 5 blocks) took their games to another gear and poured in on. These two quickly scored 13 of New Orlean’s first 16 points to start the second half and cut the deficit all the way down to one point. The Grizzlies, meanwhile, had three turnovers and three shots blocked by Davis during the same span. The Pelicans ramped up both their offense and defense coming out of the locker room. New Orleans would take the lead in the third quarter and sustain it the rest of the way.

LeBron James (17 points, 8 assists, 6 rebounds) set another Cavaliers milestone while moving his team up in the standings yet again. With eight assists on the night, the King is now tied with Mark Price (4,206) for most assists in Cleveland history. It is fascinating to realize a player of LeBron’s size has been able to play with such vision and playmaking throughout his entire career. He got plenty of help from his big men as Timofey Mozgov (19 points, 4 rebounds), Kevin Love (13 points, 10 rebounds) and Tristan Thompson (15 points, 8 offensive rebounds) all played a part in Cleveland dominating the paint against an undersized Phoenix team. The Cavaliers outscored the Suns in the paint 40-24 while also pushing the tempo in having an 11-0 advantage in fast break points. If Eric Bledsoe (7 points, 9 assists, 3-12 from the field) and Brandon Knight (10 points, 5 assists, 4-12 from the field) can’t even get fast break points for their Suns, there is no way they will be able to compete against top competition in the NBA—which is why Phoenix trailed by 32 before garbage time made the game look more respectable. The Cavs have now moved past Toronto for the three seed in the East while the floundering Suns have gone 5-11 in their last 16 games and are a full two games back of the Thunder for the eight seed.

Even without Hassan Whiteside, the Heat pulled out the close overtime victory after coming back from 16 points. This comes a night after almost completing the 35-point comeback against the Wizards. But Saturday night, guards Dwyane Wade (28 points, 4 assists, 4 rebounds) and Tyler Johnson (24 points, 4 assists, 4 rebounds) teamed up to score almost half of the team’s point as they both made big shot after big shot. Before overtime, though, in the final minute of regulation, DeMarcus Cousins (27 points, 17 rebounds) made two free throws and Andre Miller (7 points, 8 assists) converted a tough layup to turn a four-point deficit into five extra minutes of basketball. Wade and Johnson then went on to score 15 of the team’s 18 points in overtime, coming in the form of layups, 3-pointers and layups. With how up-and-down the Heat’s season has been with plenty of injuries, guys that wouldn’t normally get many minutes—like Johnson—have stepped up in major ways to help keep the team in playoff contention. The Kings got big performances from Cousins (including some powerful dunks), Rudy Gay (27 points, 8 rebounds, 5 assists) and Ben McLemore (20 points, 3-8 on 3-pointers). However, they didn’t anyone else playing very well and Gay didn’t play well in overtime to add to the struggles. Furthermore, Cousins picked up his sixth foul with 1:41 when the Kings actually held a one-point lead. Even though Miami was outrebounded 46-34, they kept its turnovers low (13) compared to Sacramento (20).

The Pacers pulled off their fifth win in a row thanks to a balanced attack offensively and yet another strong team defensive performance. It didn’t come easy, though, as the offense really struggled through three quarters. Behind 17 points through three quarters for Andrea Bargnani (21 points, 5 rebounds, 10-14 from the field), the Knicks actually led 63-60 going into the fourth quarter. David West (14 points, 11 rebounds), George Hill (15 points, 5 rebounds) and Rodney Stuckey (17 points, 4 assists) were the only Indiana players in double figures and it looked like New York had a chance of pulling off the upset. However, the Pacers scored more than half of what they did through three quarters by posting 32 points in the final quarter and picking up the ugly win. During this current win streak, Indiana is allowing opponents to score only 82.4 ppg. That is the type of defense that pushed the Pacers to two straight Eastern Conference Finals. Watch out, East, Paul George is almost back…

After an exhausting win against the Cleveland Cavaliers, it seemed reasonable for the Hawks to rest starters Paul Millsap, DeMarre Carroll and Kyle Korver against the bottom-feeding Sixers. Hollis Thompson (19 points, 9 rebounds) and Nerlens Noel (11 points, 17 rebounds, 5 steals) had other plans as their feisty, scrappy Philly team pulled off a huge win against the top team in the East and snapped their opponent’s six-game winning streak. Not only did they pull off the upset, they also came back from 16 down agaist a team that doesn’t usually let team back into games. Philly has shown glimpses this season of what the future of the team could be as this team consistently fights for a full 48 minutes no matter the opponent. Noel is growing game by game and starting the exemplify what his team represents in their grittiness. The Sixers allowed the Hawks to only score 31 points through the final two quarters while shooting 27.5 percent from the field. It was even worse in the third when the Sixers outscored the Hawks 25-16 with Philly shooting 5-22 (22.7 percent) from the field. Al Horford (12 points, 3 blocks) was finding his touch in the first half but then went scoreless in the second. Jeff Teague (17 points, 2 steals) and Dennis Schroder (16 points, 6 assists) had as many combined assists (10) as they did turnovers on the night. Atlanta will have to try and pick up its 50th win again on Monday against the Kings while the Sixers get a long break and don’t play until Wednesday versus the Bulls.

And just like that, it has become extremely apparent just how much this Portland team will miss having Wes Matthews. Beyond what he brings to the court on both ends of the floor as one of the best two-way guards in the League, it can’t be forgotten that Matthews brought stability to Portland’s starting lineup. This was the same starting lineup from a year ago as these five players had built up some of the best chemistry in the entire NBA. Aron Afflalo (14 points, 3-5 on 3-pointers) is certainly serviceable in place of Matthews, but as Saturday showed, he lacks some of vital skills Matthews brings to the team. The Blazers still had clutch shots made from Damian Lillard (32 points, 8 assists, 7 rebounds) and LaMarcus Aldridge (21 points, 8 rebounds) down the stretch as Lillard made two layups, two dunks and a 3-pointer in the final minute—which were all of the Blazers’ points. However, Ricky Rubio (13 points, 15 assists, 8 rebounds) Kevin Martin (29 points, 6 rebounds) and Gary Neal (27 points, 8-11 from the field) sunk 10-10 free throws to counteract every one of Lillard’s baskets and gave their sell-out crowd a big win to cheer for. Martin and Neal both really took advantage all night of the lack of strong perimeter defense while Rubio had no problem distributing the ball. The Wolves shot 54.1 percent from the field and went 25-31 (80.6 percent) from the free throw line. The Blazers will attempt to get back on track against the Rockets on Wednesday.

The Bucks built up a 17-point lead and picked up a huge win against the team directly above them in the standings. The win came in large part to Khris Middleton (career-high 30 points, 9 rebounds, 6-9 on 3-pointers) putting on the best scoring performance of his young career and capping it off with a vital trey from the corner with 40.8 seconds to go that turned a tie game into a three-point lead. Michael Carter-Williams (12 points, 9 assists) had a decent game, playing under control and finding his teammates right after the tipoff. The long point guard started the game assisting on his team’s first six baskets as they built an early 16-6 lead. The Wizards had five players in double figures led by Paul Pierce (14 points, 8 rebounds, 4-15 from the field), but he had more field goal attempts than actual points. With John Wall (11 points, 6 assists, 9 rebounds, 2 steals) only shooting 3-14 on the night and lacking the playmaking ability that pushed his Wiz to such early success this year, his team looked out of sorts down the stretch. After taking a 83-82 lead on a Wall layup with 1:53 to go, the Wizards only scored two more points on 1-2 shooting from the free throw line. If it wasn’t for the four-game losing streak the Bucks just snapped Saturday night, they would be even closer than 1 1/2 games back of the Wizards for the five seed.

James Harden (28 points, 7 assists, 2 steals, 10-11 on free throws) remained Houston’s backbone to its offense Saturday night while Corey Brewer (24 points, 6 rebounds, 2 steals) came through with a huge boost off the bench. The Rockets won in Denver after dropping their last three straight on the road and did so despite coughing it up 22 times. Trevor Ariza (19 points, 3-6 on 3-pointers) and Donatas Motiejunas (18 points, 6 rebounds) also had big games, as Denver really showed no fight on the defensive end of the floor. Harden got into the paint at will and the Rockets as a team scored 63 points during the second and third quarter during which they turned an early three-point deficit into a 15-point lead. Wilson Chandler (26 points, 5 rebounds, 4-5 on 3-pointers) and Randy Foye (20 points, 7 assists) both reached the 20-point plateau and shot a combined 18-26 (69.2 percent) from the field. However, the problem came on the defensive end of the court as has been the case for the Nuggets all season, no matter the head coach.