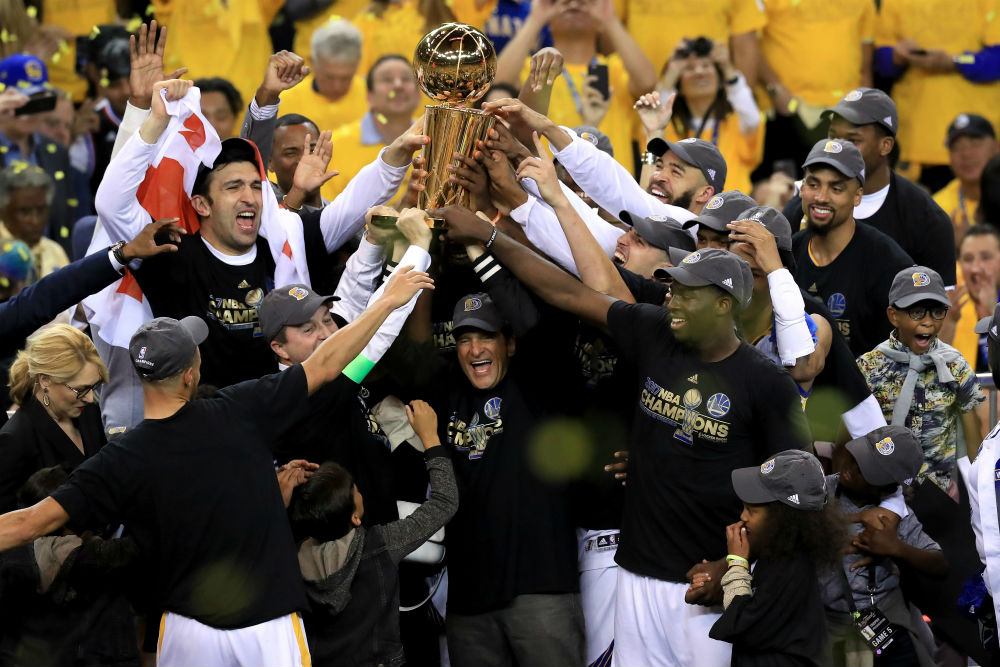 After the Cavaliers won Game 4 in convincing fashion, the 3-1 jokes were inevitable. Golden State silenced ALL of them Monday night, taking care of business and claiming their 2nd championship in the last three years.

Any recap of Game 5 (or of the entire series for that matter) must begin with Kevin Durant, who put up an absurd 39 points, 7 rebounds, and 5 assists. The Cavs just couldn’t find a way to slow him down. It’s been a long journey for KD – one filled with harsh criticism following his decision to leave OKC and join the Dubs last summer. But after nine years, the superstar finally has his ring (and a Finals MVP award to go along with it, with averages of 35.2 points, 8.4 rebounds, and 5.4 assists per game, shooting 56% from the field). “I’m just so happy for Kevin,” coach Steve Kerr said, “…He’s had an amazing career, but he just took it to the next level. He was incredible all season long. He had an amazing series, just dominated.”

Cleveland had their chances to really seize control of this one in the first half, taking an eight-point lead early in the 2nd quarter. But as they are prone to do, the Warriors responded with an electric 21-2 run, pioneered by Durant and Curry, who had 41 combined at the break.

Despite a rocking Oracle arena, the Cavaliers hung tough. They trailed by just five heading into the 4th, but couldn’t string together enough stops to get over the hump. Golden State shot 51% from the field and hit 14 three-pointers for the game.

Unsurprisingly, LeBron James did not go down without a fight. The King posted 41 points, 13 rebounds, and 8 assists in the losing effort. For the series, Bron averaged a triple-double: 33.6 points, 12.0 rebounds, and 10.0 assists (first player in NBA Finals history to do so). “I left everything on the floor every game,” he claimed, “So for me personally, I have no reason to put my head down.”

Kyrie Irving, who also deserves A TON of praise for what he did through five battles, had this to say about James: “Man, he’s freaking awesome. As a student of the game, it would be a disservice to myself if I didn’t try to learn as much as possible while I’m playing with this guy. Every single day demanding more out of himself, demanding more out of us, the true testament of a consummate professional…I know that if we continue to be with one another and keep utilizing one another, man, the sky’s the limit.”

KD wasn’t the only Warrior who went off. After struggling in Game 4, Steph told reporters he wanted to and would play better back at home. He absolutely delivered: 34 points, 10 assists, and 6 rebounds. “How ’bout Stephen Curry,” Durant said postgame, “He played like a big dog.”

Commenting on both Curry and Durant, Draymond Green stated, “I knew we were going to win when I saw the way they were locked in.”

So, the job is done. The super team has achieved their ultimate goal. “To be a part of this, to be a champion…is what you dream about as a kid,” KD remarked. Let the celebration begin.

Only thing left to ponder is, are the 2016-17 Golden State Warriors the best NBA team ever?