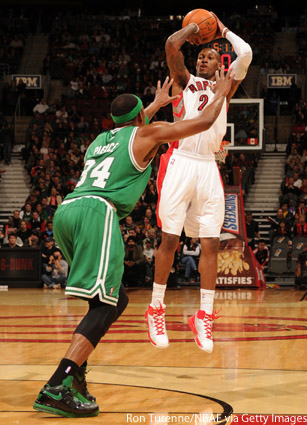 Playing without Rajon Rondo (hamstring), the Celtics were snuck up on by a young and hungry Raptors team. Andrea Bargnani scored 29, Money Weems dropped 16 and a few huge throwdowns, and Amir Johnson went for 17 and 11 and put in a pair of late free throws that gave Toronto the lead and the victory. Paul Pierce had a chance to win it with a buzzer beater, but his mid-range fade-away attempt clanked out. The C’s have now lost two in a row, so maybe we should panic—and I’m sure many around these Internets already are—but let’s not forget that Boston’s built for the Playoffs. A couple of great wins against the Heat haven’t changed that, and some regular season miscues are inevitable.

These two shot a combined 36.8 percent, which pretty much sums it up. The Hornets hung on at the end—Trevor Ariza hit a late three that put them ahead for good—and Chris Paul contributed a resourceful 9-point, 14-assist, 7-rebound, 5-steal stat line. CP3 shot only 2-12, which speaks both to Luther Head and Tyreke Evans‘ strong defense and to the game as a whole. NO newcomers Jarrett Jack, David Andersen and Marcus Banks didn’t suit up, but will do so tonight against the Clippers.

A quick list of interesting tidbits from this contest:

—With John Wall out, Gilbert Arenas stepped up, putting in 19 and dishing 16 dimes. Sixteen!

—Richard Hamilton scored 27, including his squad’s first 12 in overtime.

Kinda weird, no? And here I was thinking Rip was on his way out and the Pistons were falling apart. It might still be true, but let’s put that talk on hold for a minute or two. The Wiz shot great (53.9 percent), but couldn’t keep up in extra time before taking the L. Charlie Villanueva (25 points, 11 rebounds) hit a lay-up late in the fourth to send the game to OT, and Hamilton pretty much took it from there. Detroit’s now 5-8 and is in Dallas tomorrow night.

The Lakers are  lot better than the Warriors. So, this happened. Playing without David Lee (still out with a Wilson Chandler tooth in his forearm), GSW went down early (37-21 after one) and was never able to get back. Pau Gasol had 28 and 9, but more importantly, shot 10-10 from the field and 8-8 from the line. That’s efficiency, folks. Kobe dropped 20, and played only 27 minutes, though it’s really all that was necessary—any more might’ve been uncivilized. L.A. is now 12-2 and hosts Chicago tomorrow night.

Performance of the Night: Gilbert Arenas: 19 points (9-18 from field), 16 assists, 4 rebounds.
Moment of the Night:
Amir Johnson steps to the plate: