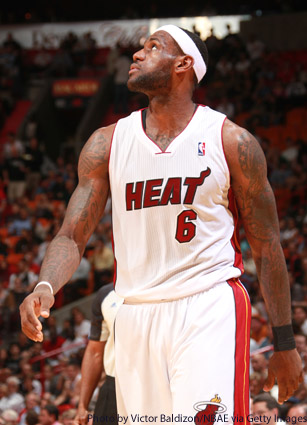 Yo kids. Had a busy night, and didn’t get to take in the games the way I would’ve like to—hence the short write-ups. Apologies in advance. Let’s get to it.

The Sixers are red hot. All five starters and two bench players scored in double figures, as Philly shot 51.1 percent from the field and picked up its seventh victory in eight tilts.Can they carry this momentum into the postseason, or will it be all fizzled out by then?

Monta Ellis and Stephen Curry combined for 47, leading the Warriors over the lowly Cavs. Besides that, um, Baron Davis (19 points) returned to Golden State?

If they want a shot at the eighth spot in the East, the Bucks are gonna have to get moving, beginning, like, yesterday. This was a decent start, as they straight-up dominated a weak Wizards squad. Brandon Jennings led Milwaukee with 23, while Jordan Crawford (!) scored a team-high 22 for Washington.

The Lakers are making a hell of a case that they’re clearly the League’s best team these days, huh? They won their eighth straight last night, defeating the Hawks easily in the ATL. Kobe Bryant dropped 26, and Andrew Bynum contributed 16 points and 16 boards to the cause.

Something strange tells me this is the one you guys are going to wanna to talk about. The Heat dropped their fifth in a row, the first time all season they’ve lost so many consecutively. Dwyane Wade (38 points) and LeBron James (31 points) both played well, but they got zero assistance from anyone, starting at Chris Bosh (7 points) and moving all the way through the quiet bench. LaMarcus Aldridge led Portland with 26.

Starting in place of the injured Channing Frye, Hakim Warrick went off, putting in 32 points and helping the Suns take down the Rockets at home. Steve Nash actually missed a free throw in the contest’s final minute, providing Houston with a chance to tie, but Brad Miller bricked what would’ve been the game-tying trey. Kyle Lowry dropped 32 for the Rockets, who are now back to .500 at 33-33.

Last Call: The Homie Nicolas Batum is my man and all, but Bron Bron did him silly on this one.