Post Up: Dwight Howard Goes Off For 30-30 Line in Hornets Win 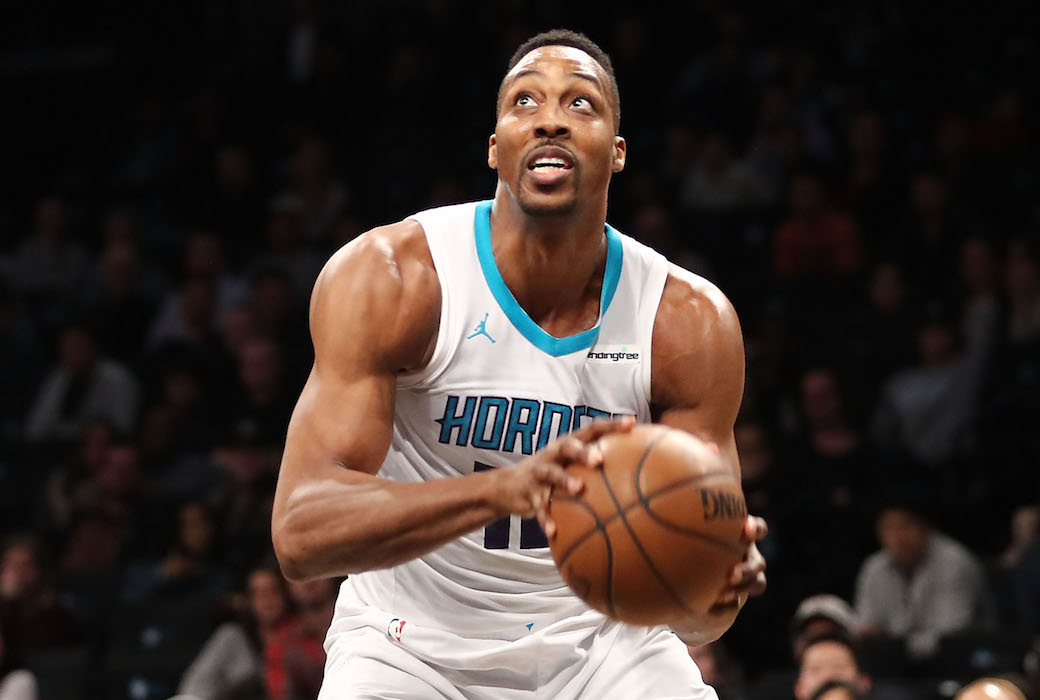 Dwight Howard had the NBA’s first 30-30 game in nearly eight years, scoring 32 points and grabbing 30 rebounds as the Hornets came back to win in Brooklyn. Charlotte used a 36-18 fourth quarter to complete the comeback, snapping a two-game losing streak and ending a five-game road trip at 2-3. D’Angelo Russell led the Nets with 19 points and five assists, but the Nets shot 41 percent for the game and were out-rebounded 68-46.

LeBron James scored 35 points, handed out 17 assists, and didn’t turn the ball over once to lead the Cavs in a masterful come-from-behind win over the likely 1 seed in the East. The Raptors led by 15 at halftime, but Cleveland out-scored Toronto 34-20 in the third quarter. The game stayed close even after the Cavs pulled ahead, but a Kevin Love three with 27 seconds left was the dagger, putting them up four. Kyle Lowry had 24 points and seven assists for the Raptors.

Six Philadelphia players scored in double figures, led by 15 each from Robert Covington, JJ Redick, Marco Belinelli, and Dario Saric in a balanced attack. The Sixers have now won four in a row as they close in on not only a playoff berth but home court advantage in the first round. The Grizzlies shot just 40 percent for the game, but got 16 points from Deyonta Davis.

Kelly Olynyk had 22 points and 10 assists to lead the Heat over the Knicks. Miami made 15 threes in the game, including four each from Tyler Johnson and Wayne Ellington. Enes Kanter led the Knicks with 23 points and 13 rebounds.

When you shoot 61 percent and have seven players in double-figures, you have to like your chances. Nikola Jokic led the way for the Nuggets with 21 points, seven rebounds, and five assists, appropriately, on Serbian Heritage Night in Chicago. Cristiano Felicio had 16 for the Bulls.

DeAndre Jordan had a double-double in the first quarter and finished with 25 points and 22 rebounds to lead the Clippers over the Bucks. More concerning for Milwaukee, Giannis Antetokounmpo appeared to suffer an injury late in the first half and did not return in the second. Khris Middleton picked up the slack and scored 22 to lead the Bucks.

Anthony Davis scored six points in the final minute and 28 overall to lead the Pelicans. Davis also had 13 rebounds and five blocks in a dominant 35-minute performance. E’twaun Moore added 23 points. The Pacers were led by Victor Oladipo‘s 21 points and eight boards.

What’s better: the dunk or the reaction? (via @Pacers) pic.twitter.com/R12a24CTjo

The Spurs appear to be back on track. San Antonio won its fifth in a row, following that awful 3-11 skid from a few weeks back. LaMarcus Aldridge had 27 points to lead the Spurs, while Bradley Beal and Kelly Oubre each had 21 to lead the Wizards. Washington now sits at sixth in the East, but just a half game out of fourth.

Danny Green with the block to end the 3️⃣rd ✋ #GoSpursGo pic.twitter.com/CrUwCDJv9U