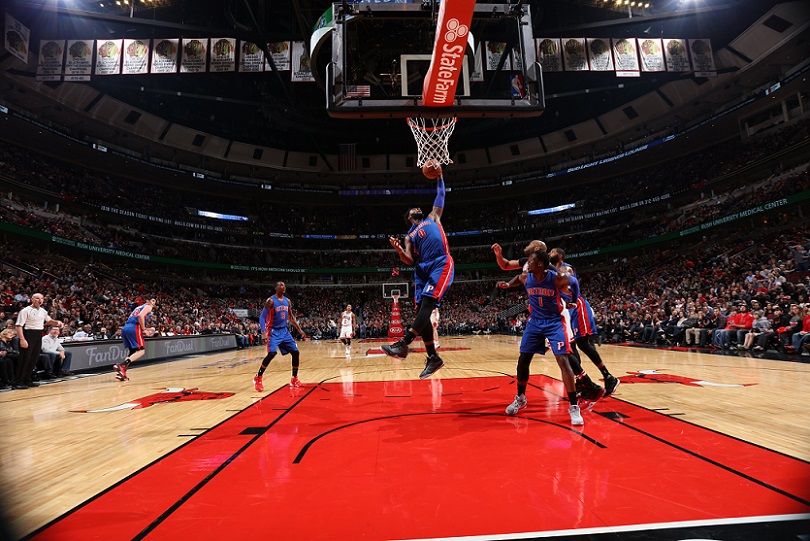 The Pistons and Bulls went to battle in a historic quadruple overtime game. Friday’s back-and-forth contest was Detroit’s first ever 4 OT game, and was Chicago’s first since March 16, 1984. With 68 minutes of basketball to fill, players were stretched thin on both sides; Marcus Morris played a staggering 57 minutes for the Pistons, while Jimmy Butler and Derrick Rose notched 56 and 54 minutes of floor time, respectively. Despite a thunderous dunk from Jimmy Butler in OT (not to mention a career-high 43 points), it was Andre Drummond who stole the show Friday.

Andre Drummond: first Pistons player with 30 points and 20 rebounds in a single game since Dennis Rodman in 1990-91 pic.twitter.com/X3aCNHmvuF

Milwaukee entered Friday’s match-up with Golden State riding high; the Bucks represented the sole blemish on the Warriors’ resume, a 108-95 loss on Dec. 13. After some spirited trash-talk between fanbases,  all focus quickly shifted to Friday’s back-and-forth match-up. Despite entering the fourth quarter with a 93-85 lead, the Bucks would succumb to a 36-19 run, resulting in their third consecutive loss. Clearly, there was some bad blood left over from Golden State’s first loss; Draymond Green had words with O.J. Mayo before leaving the court, and Marreese Speights took exception to Miles Plumlee’s rim-rocking fourth quarter dunk.

#Bucks Miles Plumlee puts #Warriors Marreese Speights on a poster and hangs on the rim. Speights isn't too pleased pic.twitter.com/xPWJ18f3Ns

Paul George posted a double-double Friday, notching 10 boards with 23 points. While he’s likely content to ultimately come away with the W, George will hear from the league after his comments on the game’s officiating.

Orlando weathered a late storm from the Trail Blazers to earn their third straight victory. The Magic received double-doubles from Tobias Harris and Nikola Vucevic, while Victor Oladipo pitched in 15 points off the bench. The former Indiana Hoosier continues to be an energizing presence in coach Scott Skiles’ second unit.

Limiting Kristaps Porzingis and Carmelo Anthony to under 30 minutes of court time apiece, coach Derek Fisher got the bench involved in Friday’s victory over the 76ers. Derrick Williams posted 17 points in 22 minutes, while Kyle O’Quinn grabbed seven boards with 10 points in 21 minutes. Friday’s game was nothing new for Philadelphia, as the 1-27 76ers continue to tank in unprecedented fashion.

Paul Millsap went off for 15 points in the fourth quarter while Al Horford posted his sixth double-double of the season en route to a victory over the gritty Celtics. The red-hot Isaiah Thomas posted 29 points in defeat, while Jae Crowder pitched in with a double-double.

Chris Bosh turned some heads in the first half with this thunderous dunk, but Toronto would score 58 points in the second half to deny Miami a four-game winning streak. The Heat entered Friday with a 12-0 record when starting Chris Bosh against the Raptors.

The exciting young core of the Timberwolves continue to show flashes of brilliance. Andrew Wiggins posted a near triple-double with 32 points, 10 boards, and six dimes while Shabazz Muhammad scored 16 off the bench. Zach LaVine went coast-to-coast for a raucous dunk in the first half.

The Spurs’ perfect 15-0 record at home has flown under the radar this season. San Antonio came out on top Friday thanks to a double-double from LaMarcus Aldridge, 21 points from Tony Parker, and 19 from Kawhi Leonard. The Clippers, meanwhile, wasted a 17 rebound performance from DeAndre Jordan in their first loss since Dec. 11.

Zaza Pachulia grabbed 18 boards while Dirk Nowitzki posted 20 points in Friday’s victory. After finding himself on the business end of a posterizing dunk against the Pacers on Wednesday, Javale McGee was understandably giddy to clock a productive 18 minutes against Memphis.

In a battle of two struggling Northwest Division teams, Denver saw its four-game winning streak come to an end. Gordon Hayward continued to enjoy a resurgence in his three-point shooting, draining four from downtown in a 26-point effort. Rodney Hood filled out his stat sheet with 12 points, four rebounds, five assists, and a steal despite entering the game with knee soreness.

The Suns were rolling on all cylinders, receiving a 29-point effort with nine dimes from Eric Bledsoe, while Alex Len contributed 19 points off the bench. Sitting at the bottom of the Southwest Division with three losses in their last four games, the Pelicans have the unenviable task of figuring out which players to build around, and which to use as trade bait.