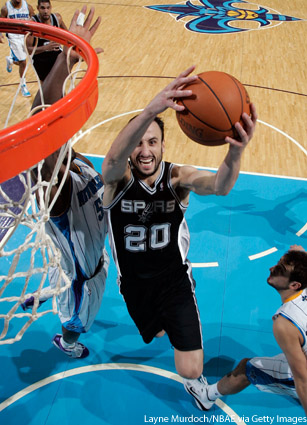 Marvin Williams (17 points) may have led the Hawks in scoring, but it was Josh Smith who led them in everything else, putting up a 12-13-10 stat line that also included 3 steals and 2 blocks. Needless to say, Atlanta cruised, jumping ahead in the third and never looking back. The Raptors had only two players in double figures, shot 40 percent, hit only one three-pointer, and just didn’t bring much of an A game on this Sunday afternoon. After a rough losing streak, a Washington–New York–Toronto stretch put the Hawks back on track. Weird how that works.

After blowing a chance to win at the end of regulation, and then blowing another chance to win at the end of the first overtime, the Knicks were finally able to seal the deal in the second overtime—mostly behind Amar’e Stoudemire’s intense 37 point, 15 rebound game. STAT might not have been taught defense, but he was definitely taught how to finish at and around the hoop. He’s also learned stamina, which showed, as he played a career-high 54 minutes. Tayshaun Prince and Rodney Stuckey fueled the Pistons, combining for 60 points and continuously keeping their team close with a seemingly never-ending stream of clutch baskets. New York (9-9) has now won five straight road games (!), and will look to move ahead of .500 for the first time this season tomorrow night against the Nets.

These two have resided at the center of a few “Who’s the second best in the West?” conversations I’ve been involved in the past week or so, and I’ve been backing the Spurs pretty hard. So, thanks for some further evidence, guys. The Hornets came out firing, taking a 17-point lead into halftime, but San Antonio—behind Manu Ginobili’s 15 second half points (23 total)—came back and dominated the third and fourth. We’ve got the standard SA box score, with nobody scoring more than 23, nobody in double-digit assists or rebounds, but a nice, well-rounded effort from all of the key players. Tim Duncan went for 21 and 7, Richard Jefferson dropped 21, and Tony Parker scored only 6 but dished 9. The Spurs now sit atop the West with a 14-2 record, while the Bees fell to a slightly less impressive 12-4.

Blake Griffin (35 points, 14 boards, 7 dimes) continued his incredible rookie campaign, but, unfortunately and perhaps more importantly, his team’s losing tendencies persisted. The Clips fell to 3-15, as the Jazz got 10-plus points out of all five starters, including 26 from point guard Deron Williams. Utah will have to rush home, as they’ll try to extend their five-game winning streak tonight against Milwaukee.

Fourth quarter, three seconds to go. Down one. Kevin Durant has the ball, top of the key. If you’re a Thunder fan, that’s a pretty good situation to be in, no? Well, Shane Battier disagrees. He draped himself all over KD, getting a full hand in his face and forcing a missed 20-foot jumper as time expired. The Rockets had gone up early, earning an 8-point lead after one, but OKC spent the entire game slowly clawing back—and eventually did so. Kevin Martin (24 points) led the Rockets in scoring, but it was Kyle Lowry (14 points, 8 dimes) who dominated the ball late in the game and Battier who shut down Durant (KD had only 18 points, and was 7-18 from the field). Though Scott Brooks and Co. won’t accept it as an excuse, the Rockets needed this one much more than the Thunder did; the W was only Houston’s second in seven games. Last note: Russell Westbrook did the sickest thing. More on that later.

In the team’s five contests leading up to this one, the Nets finished within six or less points of their opponent—but only won once. So I’m assuming this win went over well in Avery Johnson’s locker room, as it was certainly, um, “needed”. Devin Harris’ 25-point night was the key, though the squad’s 52 percent shooting was pretty vital. Wesley Matthews led the Blazers with 25, while The Homie Nicolas Batum had an off night and put in only 2. (Irrelevant, but we haven’t discussed The Homie Nicole Batum in way too long.) Portland now sits at a mediocre 8-8, and with all the injury problems that surround those dudes, the rest of ’10-11 is sure to be a battle.

When the Suns go against an equally high-octane offense, 271 points—or a similar amount—is an inevitability. This was the definition of a shootout, as both teams shot above 50 percent (Denver: 51.8; Phoenix: 51.0) and hit a combined 29 treys. The similarities between the two groups’ performances went even deeper, and was kind of eery: both shot below 70 percent from the line (Denver: 69.2; Phoenix: 66.7) and both had one player go for 30 or more (J.R. Smith scored 30, Jason Richardson scored 39). But the Nuggets ended up taking it, holding on to a 16-point lead fourth-quarter lead by a hair. Steve Nash had a chance to tie it late, but he surprisingly clanked an open three with 17 seconds to go and Denver held on. The Nugs are now 10-6, while the Suns fell to 8-9. How long until Mr. Nash is for sale?

Still not really sure how the Lakers didn’t win last night. Kobe scored a season-high 41 (and had that everyone-get-on-my-back fire going), and the Pacers didn’t do anything too special—they only shot 43.2 percent from the floor and their high scorer was Roy Hibbert, who had 24. They did play great defense, though. And the W is all that counts, so it’s time to really hand it to these guys—they’re now 8-7 and are looking awfully postseason-bound. L.A.’s regression drops them to 13-4, and they’ll look to (and probably will) bounce back in Memphis tomorrow night.