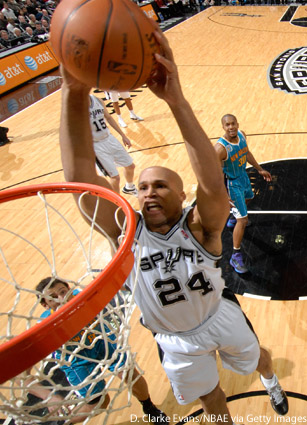 Only minutes before this one tipped off, Rajon Rondo told Coach Rivers he was a no-go, as his foot and hamstring injuries were acting up. Didn’t matter. Nate Robinson filled in well, dropping 21 (with 6 dimes and 6 boards), and the C’s shot 50.6 percent in the route. The Nets, on the contrary, shot just 37.5 percent, practically negating Devin Harris’s return to the lineup. Speaking of negation, KG (13 points, 14 rebounds) did just that to Mr. Bropez, who was held to 5 points and 6 boards. The win gave Boston a commanding 16-4 record, which is also good for the No. 1 spot in the East. New Jersey continues to slide, now losing four straight and sitting at the bottom of the Atlantic division.

The Knicks kept rolling on the road, winning their seventh straight away from MSG and their fourth straight overall. Amar’e Stoudemire ran the show, draining all types of mid-range jumpers and displaying some crazy dunking prowess as he cruised for 31 points and 16 rebounds. Wilson Chandler scored 21, while November’s Eastern Conference Rookie of the Month Landry Fields (who saw that coming?) went for 15 and 10. For the Raps, Amir Johnson scored 22 and snatched 16 boards, while Jerryd Bayless dropped 23. New York now stands at 12-9, and has a few more below-average opponents (Minnesota, Toronto again, Washington) sheduled before a rough, rough four weeks of games.

(Sidebar: After starting slow, the Knicks and the Heat have turned their seasons around after an easy stretch of scheduling. In both cases, it’ll be interesting to see if these runs maintain through tough opponents, or if they’re just situations in which good (in the Knicks’ case, pretty good; in Miami’s case, very good) teams are taking advantage of weak opposition. Seems like using a few “easy” games to gain a little chemistry and gather some positive momentum is all the rage.)

Given the mess in Detroit, the guard/small forward that’s gonna step up on any given night is always a crapshoot. Last night it was Richard Hamilton, who scored 27 off 10-17 shooting from the field. Rodney Stuckey (24 points) and Tayshaun Prince (20 points) both chipped in, as the Pistons took care of their division, um, rival easily at home. It’s only gotten worse since the LeBron Show, as the Cavs have suffered unfortunate losses to both the Pistons and the TWolves the past three nights. That’s no fun. Cleveland will look to get back on track in Philly tomorrow night.

A couple of weeks into the season, the Hornets looked like the new it team (come on, you know what I mean) in the West, while the Spurs were quietly piling on wins. A month later, and New Orleans has now dropped six out of eight—and ain’t really lookin’ too hot. But San Antonio sits at 17-3, meaning they’re sitting atop the entire League.  Given the 27-point halftime difference, this one was over pretty quickly. It’s hard to blame Chris Paul, or anyone on the Hornets, for this loss, as the Spurs shot 58.6 percent and got solid performances from many of the key players—though the starters were able to hit the bench during the fourth quarter. The Bees should be in store for a nice bounce-back game Wednesday against Detroit.

The Warriors’ two best got it done—Steph Curry put in an impressive  39 while Monta Ellis scored 29—but the rest of the roster didn’t follow suit, and the Thunder held off Golden State’s fourth-quarter comeback attempt to grab the victory. Dorell Wright shot 5-17, David Lee shot 4-12, and Reggie Williams shot 4-11, meaning the role player support would be a good place to start in figuring out what went wrong for GSW last night. Kevin Durant led Oklahoma City with 28, while Russell Westbrook shot 4-16 from the floor and needed 11 made free throws to reach 19 points. KD and Co. will be in the Chi tonight.

Up 15 at half, the Nuggets couldn’t take a sigh of relief until the final buzzer, after the Grizz stormed back in the third and a Rudy Gay game-winning buzzer beater rimmed out. Nene led the Nugs with 27 and 11, and starting swingman Arron Afflalo scored 25. Carmelo Anthony (13 points, 4-20 from the field) had an off night, though Denver was able to hang on anyway—surprising given Memphis’ 52.3 percent shooting. The W was Coach Karl’s 999th, and he’ll go for 1K tomorrow night in Charlotte.

Think Steve Nash was trying to teach John Wall a thing or two about being an NBA point guard? Sure looked like it. Check Nash’s line: 20 points, 17 assists, 3 rebounds and 1 three-pointer, all on a perfect 8-8 from the field and 3-3 from the line. That’s efficiency, kids. JW was OK—12 points, 12 dimes—but the way Nash controlled both the game and the ball was damn near flawless. The Suns shot 58 percent, and got strong play out of Hakim Warrick (26 points) and Jason Richardson (21 points). They continue to sit on the inner-fringe of the Western Conference Playoff picture, currently at eighth with an 11-9 record.

If you haven’t won in a while, playing at home against the Clippers—who haven’t won during a single road game this season—appears to be the best place to take care of that issue. Up 22 at half, LAC slowly climbed back into this battle (and a battle it was; numerous flagrant fouls were called and a few mini-scuffles broke out), but Portland held them off and got their first W in seven games. Wesley Matthews led the team with 26 points, while Marcus Camby and The Homie Nicolas Batum grabbed 19 and 14 boards, respectively. These two squads shot a combined 40.2 percent, so there’s that. I think it’s wrap-up time.

Performance of the Night: Steph Curry: 39 points, 6 assists, 4 threes, 2 steals, 1 rebound.
Moment of the Night: This was relatively meaningless, but I thought it was cool. Yeah, slow night. But you gotta love that Wall has the poise it takes to hit shots like this. Here’s to many more.