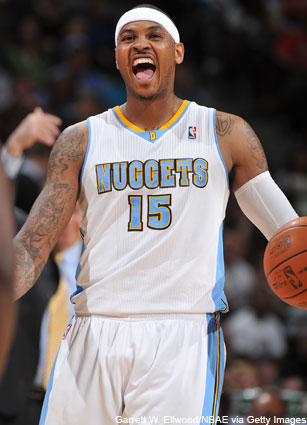 Recovering from your three-day turducken coma? Catch up on the action and get back to sleep.

Houston, we continue to have problems. Despite a poor shooting night, Gerald Wallace (21 points, 14 rebounds) let his Bobcats over the downward-pointed Rockets. Chase Budinger (what?!) has 19 points, 8 rebounds, and 4 assists off the bench but himself and Kevin Martin were a combined 12 of 32 from the field and couldn’t push the team enough for the win. As Rick Adelman said that both Yao and Aaron Brooks are still weeks away from being healthy enough to play, and the current line-up can’t can consistent production, expect more of the same from Houston for weeks to come.

Two nights after nailing the season’s 2nd game-winning shot for the Cavs (it’s okay, I’m sure not a lot of people saw it either), Mo Williams took his talents to Midwest Beach in Orlando, putting up 20 points and 8 assists in a loss to the Magic. The Dwight Howard/Anderson Varejao match-up was about as fair as…well, a Howard/Varejao match-up. Brandon Bass continues his efficiency off the bench with 10 points and 4 rebounds in just 13 minutes of play. Is it scary that JJ Redick looks better defensively than Half Man, Half Injured?

After bonding further by seeing various chick-flicks, Garnett and the Big Laundromat led the Celtics as they handed the Raptors one of their favourite collector’s items – another loss. KG finished with 26 points and 11 boards while Big Sheet added 16 and 9, while smelling deliciously fresh throughout. Rondo (4 points, 14 assists) returned to action and made his presence felt, knifing through the paint and setting up the Celtics for lay-ups galore. Jump shots are so over-rated. For the Raps, their supposed franchise-saver Bargnani got bullied out of the paint into a poor-shooting night and his point guard Calderon netted 12 points and 15 assists in a vain attempt at a win. You can’t win them all, guys. Or in your case, near half of them.

Can we get last year’s deer back? This one’s not scaring me. The Bucks continued their offensive woes in a loss to the false-firing Pistons. Brandon Jennings had 25 points and 6 assists and was the only Buck rallying his team late in the game, with a lay-up to cut it to single digits in the 3rd. However, Detroit out-scored the Bucks in three out of four quarters, led by Rodney Stuckey (18 points) and Rip Hamilton (15 pts). I just don’t get the starting line-up for the Bucks struggles to score. On paper, Bogut/Salmons/Jennings is good for at least 60 points a game, right? Add Ilyasova and walking and-1 Maggette off the bench and this team shouldn’t have the problems it’s having now.

The Heat’s next challenge was about as difficult as the questions that Matt Lauer soft-balled to LeBron on his Person of the Year interview. Considering how the Heat have been playing, I’m sure they wouldn’t mind a few more games against the Sixers. Wade scored 23 points, grabbed 6 rebounds and dished 8 assists to lead the Heat over Philly in a 4th quarter rally. Arroyo haters, stand up! Carlos scored a season-high 17 points for Miami, which bears repeating. Arroyo – 17 points. Iguodala scored 20 points and 9 rebounds for Philly, as his team was down just eight with 3:30 left when Dwyane converted a three-point play and a lay-up to push his squad to a win.

If there was any doubt to whom the Thunder are going to extend, it’s over now. On a night where the Thunder shot 20% from three, it was Russell Westbrook who made all key plays in an overtime win over the Pacers. Trailing by 14 at halftime, the Thunder stormed back thanks to Westbrook’s career-high 43 points. Durant was very clutch on this night (25 points), as his three-point play tied the game in regulation and running 5-footer gave the Thunder the lead in OT.  Darren Collison had an acrobatic no-look and-one that tightened the game in OT, but an extremely difficult off-balance Durant jumper later and the game was effectively over. Granger hit some Hail-Mary three’s to keep the game close, finishing with 30 points. The Thunder are now 6-0 when the final score is within 5 points or less. The Pacers’ color commentators were in full “I have nothing to say but I’ll say it anyway” form all game long. For example, to explain a certain foul: “Yeah that’s a foul. You can’t put two hands on the guy’s back; you can only put one and a forearm. I mean you can put two hands on anyone everywhere else.” Really, fellas? Are you sure you don’t have back-up jobs as TSA agents? Speaking of which, does James Harden’s beard warrant additional pat-downs? He could have about five Sim Cities living in there.