Warriors roll to tie the Western Conference Finals at one game apiece. 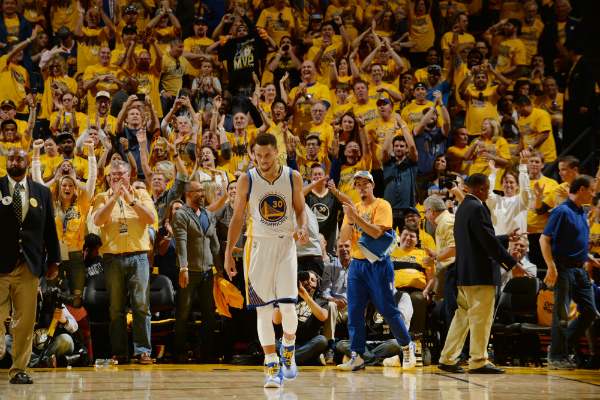 Stephen Curry took a dive into the stands of Oracle Arena in the first quarter of last night’s 118-91 win over the Oklahoma City Thunder and, for a brief moment, the Warriors faithful held its collective breath. Following a few tense moments, a bruised Curry emerged from the crowd, shook the rust off and set the night on fire.

After pouring in 23 points in the first half, Kevin Durant made a fatal mistake in the third quarter when he tried to get physical with the league MVP.

With 7:09 left in the third, Steph nailed a three-pointer to put the Warriors up 67-57. On the next possession, KD fouled Curry on a corner 3. A hot-headed Durant was then given a technical foul after jawing at the referee.

Curry stepped to the stripe and hit all four free throws and over the next two minutes outscored the Thunder 15-2 by himself. He finished with 17 points in the quarter. When the smoke cleared, the Dubs were up 20 and closed out KD, Russ and Co. with ease.

“Business as usual. This is what he does,” said Steve Kerr of his point guard’s performance in the postgame press conference.

While Steph stole the show, Andre Iguodala had the highlight of the night when he hit a circus layup at the end of the second quarter:

As previously stated, Durant scored 23 points in the first half but only took two shots in the third quarter. He finished with 29 points, 6 rebounds and 8 turnovers. After a stellar Game 1, Russell Westbrook scored 16 points on 5-14 shooting to go along with 12 dimes.

Game 3 is set for Sunday night in Oklahoma City.