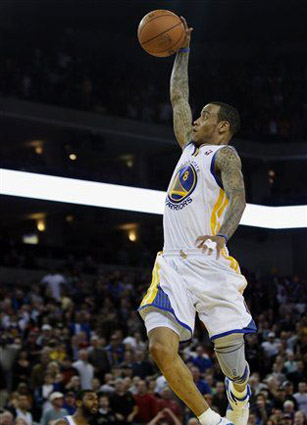 The Bulls increased their lead in the East standings with a win against the Raptors. Derrick Rose scored 36 points and dished 10 assists while Jerryd Bayless and DeMar DeRozan both had 26 points for Toronto. Chicago led by as many as 13 in the first half and regained their double-digit advantage, capped off after Kyle Korver (10 points) who hit a three pointer with 1:40 to play. Bayless responded with a runner in the lane but Korver hit another jumper to push Chicago’s lead to 7 points with under a minute to play. The Bulls are just one game behind the Spurs for the league’s best record. I hope Rose had eyes on the back of his head as he blocked James Johnson and narrowly escaped the backboard. If Bosh is ever commissioner (knock on wood), this rejection would make helmets mandatory in the league.

A tale of two halves dominated the flow of this game as the Clippers pulled off the upset down the stretch over the Thunder. Oklahoma City dominated early in the game, nursing a 16-point lead led by Kevin Durant (23 points) and playing physical defense against Blake Griffin as shown by Ibaka’s emphatic block. In the second half, however, the tide began to turn as Westbrook’s painful night of 1-of-12 shooting turned into long rebounds that L.A. turned into quick three’s. Despite being roughed up, Griffin still put up 26 points and 12 rebounds and carried the Clippers’ momentum into a close 4th quarter when Eric Gordon (18 points) hit a key three-pointer that sealed the victory. Remember Griffin’s poor free throw shooting being his kryptonite? Blake is shooting 72.4% from the line in his last 25 games, as compared to 60.9% in his first 52. The armour of this superhero just got a little thicker.

The Grizz handled their biz as they took town the Wolves to win their 4th straight game, led by Zach Randolph’s 22 points and 8 rebounds.  Michael Beasley scored 20 points for Minnesota who were out-rebounded and committed 26 turnovers (Memphis registered 17 steals on the night). Without Kevin Love, the Grizzlies feasted in the paint like Eddy Curry at Miami’s all-you-can-eat buffet as they shot 51% in the game and withstood a Wolves run that consisted mostly on three pointers to offset their lack of size. The Grizzlies are now a half-game ahead of the Hornets for the 7th seed in the West.

The Bucks withstood the mathematical inevitability that is their impending elimination from the playoffs as the beat the Sixers in overtime. John Salmons scored 19 points and Brandon Jennings scored 9 of his 13 in overtime as Milwaukee stand three and a half games behind Indiana for the final playoff spot in the East. Elton Brand had 20 points and 12 rebounds but Philadelphia had trouble scoring down the stretch. While Jennings missed a wide-open three that would have won the game, he made it for it with a triple, a layup, and an off-balance floater to pull the Bucks ahead by 4 with 26 seconds to play.

The Mavs confirmed their magnetic attraction to being the 3 seed in the West as they stumbled against the Warriors. Despite playing with a sprained ankle, Monta Ellis scored 32 points including 18 in an overbearing 3rd quarter that saw Golden State pull away and Ellis outscore the entire Mavs team. While Dirk played a quiet game of 16 points on 5-of-16 shooting, Shawn Marion led Dallas with 21 points and J.J. Barea (13 points, 11 assists) led the team in assists and flops. The Mavericks cut the lead to 3 points in the 4th quarter as Barea showcased his Derek Fisher school of phantom recoil training to draw an offensive foul on Steph Curry (12 points, 8 assists) but Curry responded with the deciding triple shortly after.

Separated at Birth of the day: Jose Calderon and Chris Kattan.

I heard that the U.S. government has spent $70 billion dollars on developing the F-22A Raptor fighter but the jet hasn’t been used in any combat operations. In honor of useless, overpaid Raptors I vote that the jets be re-named “The Turkoglus”.