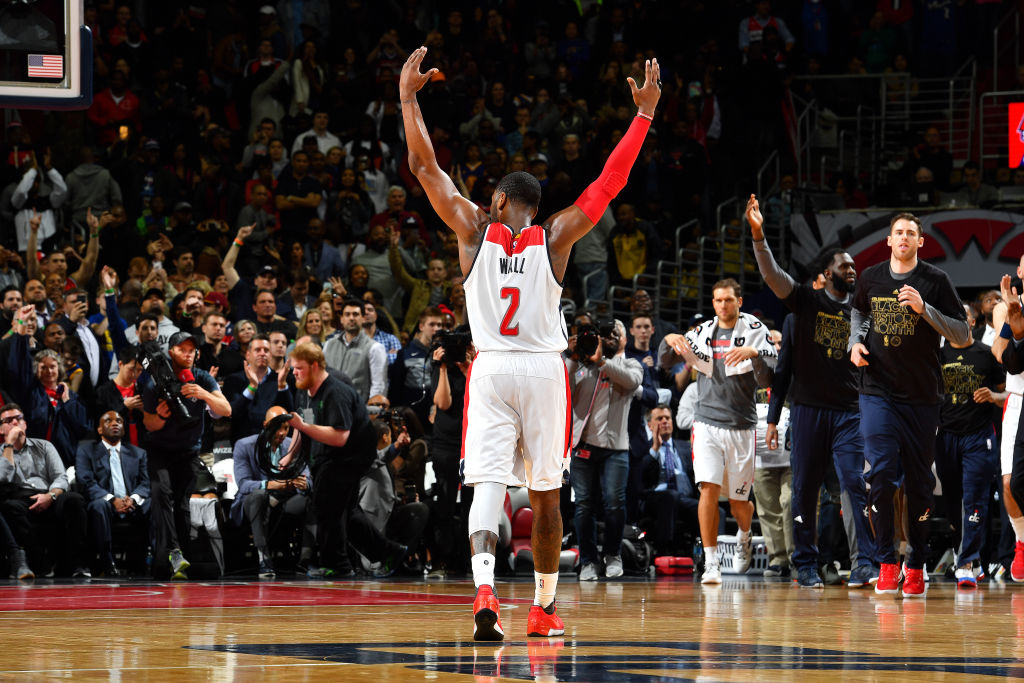 Golden State lost Kevin Durant early in this one. KD hyperextended his left knee just over a minute into the game, leaving Stephen Curry (25p, 7r, 4a) to pick up the offensive slack. After the game, Steve Kerr said Durant would be evaluated with an MRI Wednesday.

Draymond Green filled up his stat sheet as well, but the Wizards emerged victorious after a back-and-forth fourth quarter.

Bradley Beal and Marcus Morris scored 25 and 22 points, respectively, while recent acquisition Bojan Bogdanovic added 16 points off the bench. The oft-injured Ian Mahinmi even got in the act with six points, six boards and a block. After the game, Markieff Morris gave an, um, interesting take on how he’s able to perform in the clutch:

With Tuesday’s win, the Pistons are now just two games behind Indiana for the sixth seed of the Eastern Conference. Marcus Morris led the way with a career-high 37 points and Andre Drummond double-doubled (19p, 15r) in the overtime victory. Damian Lillard and C.J. McCollum did their thing- combining for 59 points- but Portland’s 24 turnovers came back to bite them. At least trade deadline pick-up Jusuf Nurkic continues to make strides.

Mike Conley scored a team-high 29 points while dishing out eight assists, and Marc Gasol went 5-for-5 from beyond the arc in a comfortable W for the Grizzlies. Devin Booker– who managed just nine points on the night- got tangled up with Vince Carter, resulting in Carter’s early ejection.

Vince Carter received an early exit after mixing it up with Devin Booker 😳 pic.twitter.com/2CtHiUNHWg

Nikola Jokic became the first Nugget to record three triple-doubles in a season since Dikembe Mutombo. The Joker posted 19 points, 16 rebounds, and 10 assists as Denver added to their lead over Sacramento in the Western Conference playoff chase. Danilo Gallinari and Wilson Chandler combined for 42, while Gary Harris and Will Barton had 15 points apiece.

What more can be said of Russell Westbrook? Russ dropped his second consecutive triple-double with more than 40 points, leading OKC to a tightly contested win over Gordon Haywayrd (19 points) and the Jazz. The Thunder, who were without Victor Oladipo for a third straight game, were on point from downtown; hitting a franchise record 12 3-pointers in the first half.

Steve Clifford and the Hornets needed this W in the worst way. Now 2-8 over their last 10, Charlotte was given a run for their money by Julius Randle and D’Angelo Russell, who dropped 23 points each (Randle was four dimes shy of a triple-double). With Miles Plumlee sidelined, Frank Kaminsky filled in at the 5, recording 24 points with 12 boards. Kemba Walker continued his excellent season with 30 points and seven dimes.