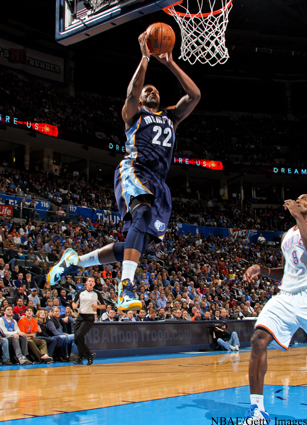 Philadelphia is going down a slippery slope and have looked quite unimpressive in this very young NBA season. While there’s still plenty of time to turn things around and they still haven’t played with a full healthy roster, getting blown out at home by the Pistons is unacceptable. Detroit wiped the floor with Philly, beating them up inside and locking them down on defense. The Pistons outrebounded the Sixers 57-38 and outscored them in the paint 42-28 while holding them to under 30 percent shooting. With Andrew Bynum watching from the bench, the Sixers continue to get beat up inside and last night the fans let them know they have had enough, booing the home team as they left the court at the half. A season of great hope is quickly turning sour in Philly.

— Greg Monroe continues to put up numbers. Last night he went for 19 points, 18 boards and 6 assists.

— Jrue Holiday’s up and down season rolls on. Against Detroit, Holiday shot 4-13 for 12 points and dished out 7 assists.

— Kyle Singler got the start and scored 16 points on 7-14 shooting.

— The only positive for the Sixers last night was their way below average four turnovers.

After Rajon Rondo left the game with an ankle injury in the third quarter, the bench picked up the slack and carried the Celtics to a tough home win over Utah. Paul Pierce started the game missing 10 of his first 13 shots but eventually found his stroke and hit three straight three-pointers over a minute and change span in the third quarter. With about five minutes left in the third, Rondo came up limp after rolling his ankle and left the court. With Rondo out, Jeff Green and newcomer Leandro Barbosa led an 8-0 third quarter run that gave the Celtics a 68-60 lead. But the Jazz came back, scoring 10 of the final 15 points in the quarter to give them a three-point lead heading into the fourth quarter.

The C’s battled back in the final quarter and after Garnett hit Barbosa with a behind-the-back pass for a layup, they took a six-point lead with about six minutes left. The teams continued to trade baskets before Green dunked all over Al Jefferson and got the crowd rockin’. Despite the momenutm shift, Utah never backed down and cut the lead to two with under five minutes to go. With the game tied at 93, KG hit one of two freebies to take a one-point lead. The Jazz called a timeout with 33 seconds left and set up a play for Mo Williams who missed a left-handed scoop shot with 22 seconds remaining. The Jazz fouled Pierce who went on to hit both free throws and ice the game.

— Even though Rondo only played 25 minutes, he still dropped 10 dimes to extend his consecutive 10+ assist streak to 32 games.

— Paul Pierce led all scorers with 23 points and Jeff green dropped 16 off the bench.

The Pacers are in trouble. Last night’s 99-85 final score is misleading; the game wasn’t even that close. Milwaukee led from wire-to-wire and built a 32-point lead and absolutely embarrassed their division foe. The Bucks shot 48 percent in the first half and led 60-34 at the break. Heading into the fourth, Milwaukee led 82-53 and played their reserves for much of the final 12 minutes which made the final score somewhat respectable for Indy.

— A lot of hoop fans were expecting big things from Indiana this year and they have really stumbled out of the gate.

After building a 21-point lead thanks to a 39-point second quarter outburst, the Rockets took their foot off the gas and gave New Orleans a chance to get a win in Houston. The Rockets took a 64-45 lead into the half and were in full control on their home court. In the third, New Orleans tightened up on the perimeter after giving up a number of three’s in the first half and were able to cut the deficit to six. Late in the quarter, Greivis Vasquez rolled his ankle and went to the locker room. While tending to his injury, the Rockets were able to build their lead back up and led 85-76 after three.

In the fourth, the Rockets turned the ball over four times in the first four minutes of the fourth and the Hornets took advantage. Even though his ankle was bothering him, Vasquez returned and went on to nail two three’s to trigger an 8-0 run that got the Hornets within two with under two minutes to go. Late in the fourth, the Rockets were stuck with the shot clock winding down when Chandler Parsons hit a fadeaway jumper from the top of the key that gave Houston a four-point lead and put the nail in the coffin of the Hornets comeback hopes.

— Vasquez had another great game at the point, scoring a career-high 24 points, dropping 9 dimes and only turning the ball over twice.

Are the Grizzlies the best team in the League? Well, that can certainly be argued, but there’s no doubt that they are dangerous and no team wants to see them right now. Memphis has won six straight games and are off to the best start in franchise history. Memphis continues to beat teams up inside with their tremendous frontcourt duo of Marc Gasol and Zach Randolph. The two combined for 34 points, 17 boards and 3 blocks and helped the Grizzlies lead by double-figures throughout the second half. Memphis withstood 34 points and 10 boards from Kevin Durant and Russ Westbrook’s 17 and a season-high 13 assists thanks to Rudy Gay who finished with 28. In the third, OKC cut the lead to six but Gay scored on three straight 15-foot jumpers to push the lead back to double-figures and end the chances of a Thunder comeback.

— The Grizzlies are getting great minutes from their bench. Last night, Jerryd Bayless scored 12 and Quincy Pondexter dropped 13.

— Memphis only turned the ball over once in the first half.

— Zach Randolph and Kendrick Perkins had to be separated in the fourth after exchanging words.

Was there any question that Kemba Walker was going to miss the game-winning shot during last night’s contest? After a sloppy final minute that saw Reggie Williams get a tech for calling a timeout on an inbounds play when the team had none left, a plethora of missed free throws by both teams and terrible turnovers, Walker saved the day with a game-winner from the top of the key. Peep the vid below:

The Wizards were so close to their first victory of the season, they could taste it. D.C. made six three-pointers in the fourth quarter and ripped off a 15-0 run in three and a half minutes to make the score 88-85, putting themselves in prime position to get a dub. The Mavs got things under control and fed Chris Kaman, who finished with 23 points, and he hit a tough shot in the post. After that, Kaman grabbed a defensive rebound that led to an O.J. Mayo bucket that put Dallas back up by seven. But the Wizards wouldn’t quit. Kevin Seraphin hit consecutive baskets to make the score 101-98 with under two mintues to go. In the final minute, Cartier Martin hit a three to cut the deficit to three. After Seraphin stole the ball, Jannero Pargo had a chance to tie it at 104 with a three but missed and on the other end, Kaman hit a layup and got fouled. He went on to hit the free throw and sent the Wizards packin’.

— Dallas beat up the Wizards inside, outscoring them 46-28.

Chicago went on a 10-0 run in the third quarter to take a 79-61 lead and were well on their way to an easy victory during their annual circus road trip. In the fourth, though, the Suns hit the boards and turned up the intensity on defense to get themselves back in the game. Martin Gorcat hit a hook shot to cut the Bulls’ lead to three, then Shannon Brown drove down the lane for a layup with four and a half minutes to go. With three minutes left, Bassy Telfair hit a three to tie it up at 93 which turned an 18-point blowout into a great game. The Bulls were able to take the lead back and were up 99-95 before Brown converted an and one play to trim the deficit to one. When Carlos Boozer missed a jumper on the other end, Phoenix had a chance to win the game. Instead, Brown missed on a drive to the basket with 19 seconds to go. Rip Hamilton hit the front end of a one and one after being fouled to put Chicago up 100-98 but P.J. Tucker was able to out hustle the bulls for a loose ball and put in a layup to tie the score at 100 and send the game to overtime. In the extra session, the Suns ran out of gas and the Bulls scored on each of their first five overtime possessions to open up a nine-point lead with a minute and twenty-three seconds to go and held off Phoenix for a tough road victory.

— Markieef Morris left the game with a back injury.

— Six Suns players scored in double-figures. They were led by Luis Scola who scored 24 points and grabbed 14 boards.

While one LA team is in complete disarray, that “other” LA team is piling up wins and looking like serious contenders. Last night, the Clippers won convincingly against the defending World Champs at home for their fourth straight victory. Los Angeles led 72-70 in the third before putting together a 13-4 run triggered by the playmaking ability of CP3 that gave them a 85-74 lead heading into the fourth. In the fourth, the Clippers continued their hot shooting as Eric Bledsoe scored the first eight points of the quarter to push the lead to 17. The Clippers starters spent much of the final quarter looking on and watched their deep bench ge preserve the lead and ensure an early statement victory.

— Ray Allen had absolutely no business guarding Jamal Crawford. J-Crossover had Allen on skates with a ridiculous amount of crossovers and finished with a team-high 22 off the bench.

— Dwyane Wade scored 6 points and was hobbled by an ankle injury.

— Chris Paul scored 16 points, dropped 10 dimes and earned 4 steals in a little over 30 minutes of play.

— Eric Bledsoe with the play of the night:

A young Warriors team relied on their fresh-faced rookie to help guide them to a nice win over a good Hawks team. Harrison Barnes scored 19 points, grabbed 13 boards and hit a pair of big free throws down the stretch to fend off the Hawks. At the end of the third and early into the fourth, Barnes helped trigger a an 18-7 run with three big baskets to put Golden State up 13. In the fourth, Lou Williams hit three straight three-pointers to get the Hawks back within two. After Williams’ final three, Jarrett Jack was fouled and hit both of his free throws to ice the game.

— With Al Horford on the bench battling an illness and Zaza Pachulia missing time thanks to a cut that needed eight stitches, David Lee put together an 18-point, 10-rebound performance.

— Lou Will finished with 18 off the pine.