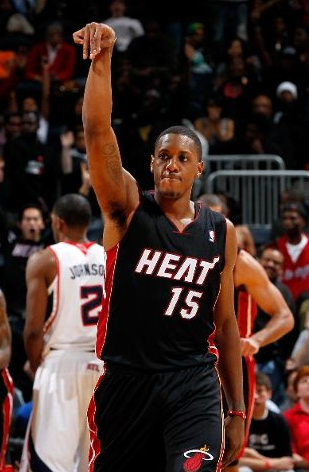 Four games to talk about, as the Spurs made quick work of the Mavs and the Blazers beat the Lakers, while the Heat needed almost four hours (and the entire first half of the Portland-L.A. game) to put away the Hawks. Then again, the world was introduced to Ivan Johnson and his diamond grill, a welcome reward for watching the longest game of the year to date.

Just because a game goes 3 overtimes, we don’t have to pretend it was a good one. Atlanta and Miami wanted to remind us of that last night, it seems. Without Dwyane Wade (foot) and LeBron James (ankle), the Heat looked to the last man standing of the Big Three, Chris Bosh, to lead. And he came through with 33 points and 14 rebounds, even delivering a clutch three-pointer with 0.6 seconds left to send this game to overtime. That’s when things got ridiculous, extending to three extra periods, until finally Miami pulled away in the third—thanks in part to ATL’s 0-for-7 shooting with 2 turnovers in that frame. It’s a back-breaking loss for the Hawks, especially considering it was the first night of a back-to-back-to-back, and it comes on the heels of a breakthrough win against the Heat earlier in the week. Mario Chalmers finished with 29 points, 8 assists, 7 rebounds and 3 steals in a team-high 49 minutes for Miami, who also got timely contributions from Terrel Harris (9 points, 14 rebounds, 4 assists, 1 highlight in 42 minutes) and Udonis Haslem (14 points, 11 rebounds in 46 minutes) off the bench. LeBron and Wade liked what they saw, while playing cheerleader in dapper digs. Atlanta’s Joe Johnson scored 20 and Josh Smith put up a 17 and 13 double-double, but all the chatter about the Hawks revolved around Ivan Johnson, the mean-mugging reserve who sparked ATL in the third quarter with his high motor and bruising physical play. He had 13 points, 4 boards before fouling out in 21 minutes, Reggie and Chuck damn near anointed him an All-Star on the TNT broadcast, and he was trending on Twitter before the game went final.

What a weird game. The Spurs jumped out to a 31-17 lead after one quarter and a 55-29 lead at the half, as San Antonio cruised to their fifth win on the season behind 17 points from Matt Bonner. Yes, the Red Rocket was the game’s leading scorer, in 25 minutes off the bench. San Antonio protected the basketball—just 8 turnovers—and Tony Parker ran the show with 11 points and 8 assists. The best for Dallas? Hard to say anyone was “best” at anything, since the Mavs never led, made only 27 of 77 shots in the game and only two players scored in double figures—Jason Terry (12) and Delonte West (10). The Mavs shot 1-of-19 from the three-point line for the game, and were outscored 48-3 from beyond the arc. Dirk Nowitzki scored just 6 points on 3-of-11 shooting, his lowest offensive output since December 2009. Jason Kidd left the game near the end of the first quarter and did not return, citing a back injury. Dallas drops to 3-5 and 0-3 on the road.

Brandon Jennings had 31 points and 7 assists but the Bucks blew a 21-point lead and Sacramento picked up a win just hours after head coach Paul Westphal was fired and replaced by Keith Smart. The Kings outscored Milwaukee 35-18 in the fourth quarter, and Tyreke Evans scored 26 points (plus 10 rebounds and 5 assists) including this ridiculous scoop shot in traffic to net SacTown the inspired victory. Despite shooting just 4-for-21 from three-point range and losing Chuck Hayes to a nasty dislocated shoulder, Sacramento ended the game on a 22-6 run and survived thanks to four straight clutch Evans free throws in the the final minute. The Bucks shot 51 percent from the field as a team and got 18 points and 9 boards from Drew Gooden, but Milwaukee was outrebounded 55 to 31 without Andrew Bogut in the lineup, who missed his second straight game for undisclosed personal reasons. Marcus Thornton led all scorers with 27 points—he’s scored 23+ points in 34+ minutes in three of the Kings’ last four games.

First things first—after not noticing Atlanta’s crowd for an entire game plus three OTs, you have to appreciate the Portland fans. They’re crazy, and crazy loud! And based on how their team is playing to start 2012, they have plenty to be happy about. The Blazers sit atop the Western Conference at 5-1, and already have wins over Denver, Oklahoma City and now the Lakers. Portland is playing uptempo (they got up 81 shots last night) but protect the ball (just 4 turnovers), and also have the ability to clamp down on defense (L.A. shot 0-for-11 from three-point range). After going 7-for-7 in the first half, Andrew Bynum was held to 2-of-9 shooting in the second half. He still had a big game, with 21 points and 12 boards, but LaMarcus Aldridge had 28 and 10 and the Marcus Camby-Kurt Thomas combo was enough up front to bother the Lakers inside. Kobe did Kobe, finishing with 30 points (13-24 from the field) and 8 rebounds, but it looked like his wrist was bothering him, and he forced some shots in the second half. Bryant matched up against Gerald Wallace for most of the game, and Wallace went for 31 points and played with the kind of relentless toughness Portland hoped for when acquiring him last season. Wes Mathews scored 16 and Jamal Crawford added 17 for the Blazers, who get a rematch with the only team that’s beaten them this season—the Clippers—on Tuesday at home, with games against Phoenix and Cleveland in between.

Moment of the Night: The shot that started the marathon in Atlanta.

Quote of the Night: Charles Barkley should be forever mic’d up.

Tonight: Man, it’s already been two weeks?! I’m done for the week, but Mr. Walsh will be in the building to recap the dozen games on tap for your viewing pleasure on Friday night. I’ll be watching New York at Washington, and probably tweeting under the influence about it, while ESPN has Bulls-Magic at 8 and Blazers-Suns after that. Other games of note include the Rubios vs. the Kyries in Minnesota, Pacers at Celtics and Rockets-Thunder. Have a good weekend, guys and gals. Now let me go get some sleep!