The Hawks eked out a one-point victory, while GSW and OKC routed their opponents. 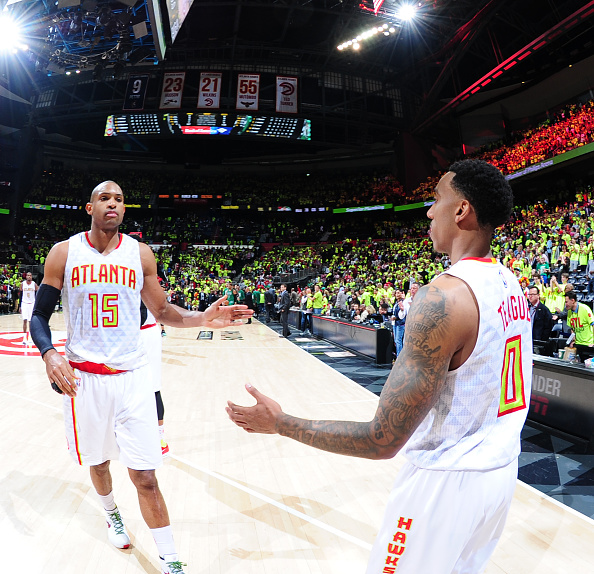 Despite entering halftime up 17 points, the Hawks squandered their advantage, allowing Boston to take a lead midway through the fourth quarter.

Jae Crowder from deep! The C's and Hawks are locked in a fourth-quarter battle – Tune in now on @CSNNE! pic.twitter.com/kQaRxCdu5w

Paul Millsap, Kent Bazemore, and Al Horford’s combined 70 points would prove to be the difference, however, as the Hawks would eke out a one-point victory; overcoming an 0-7 mark from downtown for Kyle Korver. Atlanta and Boston will next square off on Tuesday; a match-up the Celtics hope Avery Bradley will be able to participate in.

Paul George got Indiana’s playoff run started on the right foot, dropping 33 points on 12-22 shooting, handing Toronto a frustrating home loss. Despite the lackluster offensive output – Cory Joseph scored a team-high 18 points off the bench – DeMar DeRozan and Kyle Lowry claimed not to be concerned with the Game 1 defeat.

“We’re good, man,” Lowry added. “It’s one game. It’s not last year. We’re very positive. We’re very confident. We just have to go out there and do what we know how to do.”

Stephen Curry may have only played 20 minutes in Saturday’s rout, but he made them count. Scoring 24 points, Steph led the Warriors to a combined 10-for-25 rate from beyond the arc.

Stephen Curry's first 💦 of the playoffs. #Warriors up 33-15 through 1Q. #NBAPlayoffshttps://t.co/Z9YaXJ43dn

Meanwhile, the Rockets struggled to the tune of 35.7 percent shooting while committing 24 turnovers. James Harden and Dwight Howard, who combined for 31 points, will look to regroup for Monday’s match-up.

We all knew the Mavericks would have their hands full in this Western Conference match-up; Rick Carlisle may be without David Lee for the series, and J.J. Barea made an early exit after re-aggravating a groin injury. The extent of tonight’s mismatch was immediately evident, however, as the Thunder jumped out to a 59-33 lead by halftime.  The Mavs, who shot an astonishing 29.8 percent from the field in Saturday’s loss, won’t be long for the playoffs without drastic improvement.

KD with the pull up trey 👌:https://t.co/pxe1uJasg3