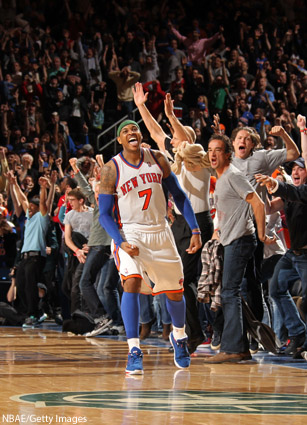 Another Sunday Funday to recap, so grab that Monday morning cup of coffee and warm up the typing fingers. Let’s get it.

What a game. Derrick Rose was finally back in uniform after missing 12 games due to injury, and the Bulls and Knicks squared off in what could be a first-round Playoff matchup. The Knicks took a 21-point lead in the first quarter, only to see it become a 10-point deficit by the fourth quarter—good thing New York had Carmelo Anthony on its side. Melo finished with 43 points, 7 rebounds and 3 assists in 47 minutes, getting every big bucket for the Knicks all game long. None bigger than these two, though—first, he forces OT with a three. Then, he finishes the game off with an eerily similar trey, outdueling a rusty DRose (29 points, but on 8-26 shooting) in a game when both teams shot sub-40 percent from the floor.

It’s hard to say which team this result says more about—the surging Celtics or the slipping Sixers? Rajon Rondo’s 15 assists marked the 17th straight game in which he’s racked up double-digit dimes, and his passing opened up the floor for the Cs to shoot 59 percent from the field (Philly shot just 38 percent). Kevin Garnett scored 20 points on just 11 shots to lead all scorers, even while he played only 27 minutes. Meanwhile, the Sixers’ typical “balanced” scoring attack saw just 3 players in double figures, led by Nikola Vucevic’s 14 points and 13 rebounds. Philly has now lost 4 in a row, this time to the team they once held a healthy lead over in the Atlantic Division. As of today, Boston sits in the 4-spot in the East, while Philadelphia is the 8-seed, trailed by only one game by Milwaukee.

No Dwyane Wade, no problem. DWade sat out with a sprained ankle, and LeBron James and Chris Bosh responded as they always do by carrying the Heat to a win. LeBron finished with 26 points on 12-22 shooting, Bosh had 22 points and 9 rebounds and James Jones chipped in a career-high 18 off the bench (yes, all on 6 three-pointers) as Miami won its 12th game in the last 13 against Detroit. The Heat are now an NBA-best 24-3 at home and, yes…10-1 without Wade. How terrible did the Pistons play against the vaunted Miami D? As a team, they piled up 22 turnovers and just 8 assists. That’s pretty terrible. The least terrible Piston was Brandon Knight, who scored 16 points. Greg Monroe had 11 points on 5-8 shooting—can we get this dude some more touches, for the love of Pete.

Gerald Green scored 32 points—a season-high and one point shy of his career-high—in leading the Nets to what was an unexpectedly thrilling showdown of Lottery teams in Newark. Not to be outdone, Antawn Jamison poured in 34 points of his own for the Cavaliers, but with ROY favorite Kyrie Irving still nursing a right shoulder injury, Cleveland didn’t have the will to win in OT. How did they get there? Check out the last 30 seconds of regulation for some craziness:

The Nets scored the first four points of overtime and never looked back. Green threw down a nasty alley-oop dunk from Deron Williams (18 points, 10 rebounds) to put the finishing touches on a New Jersey win—the Nets are just 9-19 at home this year.

San Antonio is quietly becoming a monster. Consider this: they blew past Utah with relative ease, riding 28 points from Tony Parker and 51 percent shooting as a team—all with Boris Diaw in the starting lineup (DeJuan Blair cannot be happy about this). Manu Ginobili added 23 points and Tim Duncan had 13 points and 16 boards as the Spurs won their 11th straight game as they sit atop the West. The only thing crazier than that streak is that it happens to be the second such stint that the Spurs have rattled off already this year. San Antonio outshot the Jazz from the free throw line (38-43 to 16-26) and held Paul Millsap to a dreadful 2 points on 1-8 shooting and 3 rebounds. As if Utah—now on the outside looking in at the Playoff picture—needed more bad news, CJ Miles left in the second quarter with a calf injury and did not return.

Kevin Durant scored 23 points and James Harden’s 17 led a 40 to 21 bench scoring advantage for Oklahoma City as the Thunder beat down the Raptors to snap a season-high 3-game losing streak. Russell Westbrook added 15 points, 6 rebounds and 6 assists and Serge Ibaka notched his 16th 5-block game of the year as the Thunder improved to 24-5 at home and are in a virtual tie with San Antonio for the top spot in the Western Conference. Durant led a 24-0 second-half run that spelled doom for Toronto, which was led in scoring by Jose Calderon’s 19 points. Unfortunately, DeMar Derozan was 6-22 from the floor (16 points), James Johnson was 2-11 (5 points) and the Raps as a team shot a dysmal 37 percent on field goals.

Houston is now 7-3 over its last 10 games after completing the season sweep of Sacramento behind 17 first-quarter points from Courtney Lee, who finished with a season-high 25. Perhaps even more encouraging than the big win for the Rockets was the return of Kyle Lowry, who played 18 minutes and dished out 7 assists (only 1 point) while regaining his strength, zapped from a serious bacterial infection. Houston led most of the way in this one, and while the Kings ended the third quarter on a 16-4 run, the red-hot Rockets were simply too much on the offensive end, sharing the ball to the tune of 29 team dimes. Terrence Williams continued his stellar play of late, leading SacTown in scoring with 21 points—but Tyreke Evans (3-7 shooting, 6 points, 1 assist) and DeMarcus Cousins (4-8, 9 points, 8 rebounds) struggled.

Line of the Night: Melo’s 43 for the Knickerbockers.

Stat of the Night: The aforementioned Boris Diaw now has more wins while a member of the Spurs (9) than his entire season prior to now with the Bobcats (7).

Tonight: Ten games on tap, including Clippers-Grizzlies, Spurs-Jazz and a Lottery matchup for the ages as the Bobcats host the Wizards. See you back here in 24.