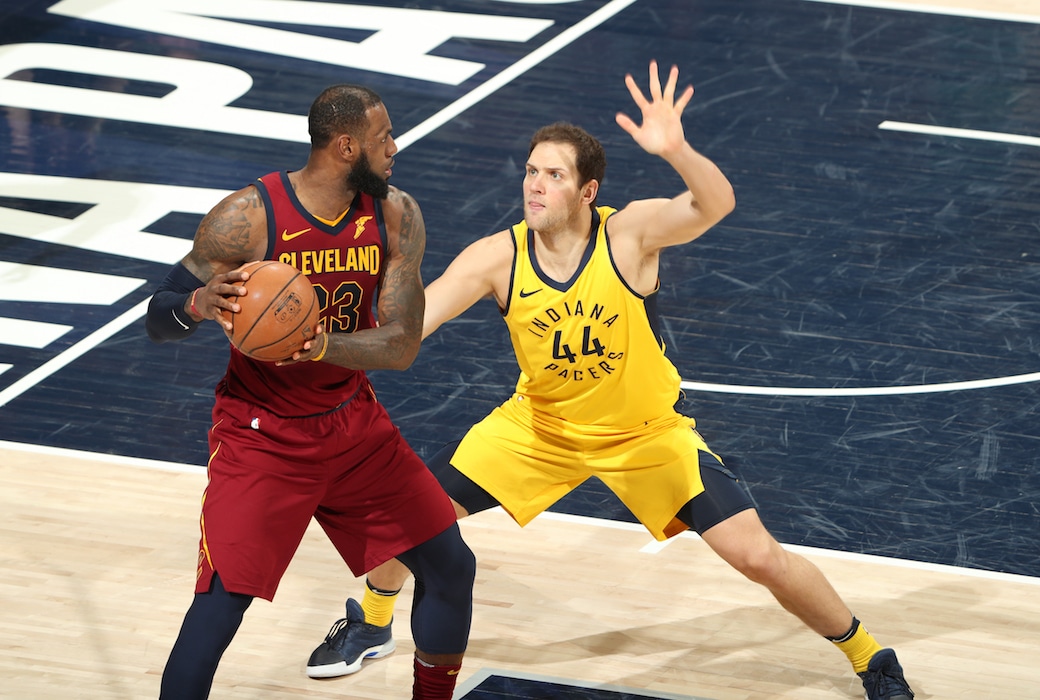 A 12-3 run late in the fourth quarter followed by a wild final minute lifted the Cavaliers over the Pacers and sent the series back to Cleveland all even. LeBron James, naturally, led the way for Cleveland, scoring 32 points to go with 13 rebounds, seven assists, and two steals.

The Cavs led by 10 at halftime, but a quick 10-2 spurt to open the second half brought Indiana close before the Pacers pulled ahead early in the fourth. Then Kyle Korver and James took over. They combined for 14 of the Cavs’ final 15 points, including a pair of clutch threes from Korver.

The Pacers still had a chance in the final minute. Down six with 14 seconds left, Victor Oladipo hit a three. Then, on the ensuing inbounds, it appeared that Lance Stephenson may have successfully tied up Jeff Green. Stephenson and Green both went to the floor and there was some shoving involved, causing a delay as the officials went to the replay. The conclusion was a common foul on Stephenson, so Green went to the line to make it a two possession game. The Pacers could not score on their trip down the court and Cleveland survived.

Domantas Sabonis had 19 to lead Indiana, while seven of the nine Pacers to appear in the game scored in double figures.

Giannis Antetokounmpo‘s tip-in with five seconds to go broke a tie and helped the Bucks even up the series at two games apiece. Those were the last two of the Greek Freak’s team-high 27 points. Khris Middleton had 23 to help out.

But that basket wasn’t the loudest of the night for Giannis. That came on this dunk over Al Horford that put Milwaukee up by seven. The Bucks were, at the time, trying to hold off a Celtics rally that brought them back from down 20 in the second half:

Jaylen Brown did his part for the Celtics. He scored 34 points, including two baskets in a row with under two minutes left that got the Celtics within one. Jayson Tatum put them ahead a moment later with a jumper of his own. Then, trailing 100-99, Malcolm Brogdon hit a three to put the Bucks ahead. Boston never led again.

The home team has won each of the first four games of this series. Game 5 will be in Boston on Tuesday night.

The Spurs staved off elimination, defeating the Warriors to force the series back to Oakland for a Game 5. LaMarcus Aldridge led the way for San Antonio with 22 points and 10 rebounds as one of five Spurs players in double figures.

San Antonio, playing again without head coach Gregg Popovich, led by 14 at the break, but the Warriors won the third quarter 29-22 to stay within striking distance. Then, in the fourth, Manu Ginobili ensured that the hometown crowd would see a win, scoring 10 of his 16 points down the stretch.

Kevin Durant had 34 points and 13 rebounds to lead the Warriors, but Golden State shot just 38 percent for the game and 25 percent from three.

LaMarcus is 3-for-3 from long range #GoSpursGo pic.twitter.com/3rgNiqtiPB

Bradley Beal scored 31 points and John Wall had 27 points and 14 assists as the Wizards protected their home court and evened up the series 2-2.

It started in the third quarter where Beal scored 12 on three threes and a trip to the line on a fourth attempt. He helped turn an 11-point deficit into a tie game headed into the fourth. Then, down the stretch, Wall simply took over. And that’s exactly what the Wizards needed, as Beal fouled out with five minutes to go and the score tied. From that point forward, Wall scored eight points and assisted on a Markieff Morris alley-oop to hold off Toronto.

Wall finds Markieff Morris on the lob!#DCFamily up 3 with 1:45 left.