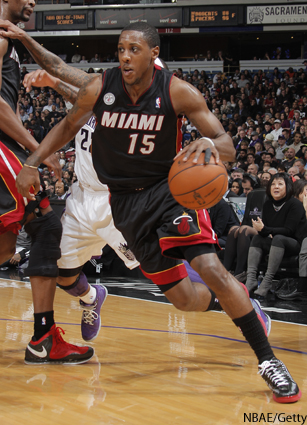 Mario Chalmers went off against the Kings, the Clippers dropped an easy one at home and the Wizards won in John Wall’s return on Saturday night.

The Clippers seemed ready to cruise to an easy win, as they held an 8-point lead with five minutes left. But Orlando went on a quick 8-0 run to even the score, and took the lead on the strength of a JJ Redick triple with 42 seconds left. They held on when Jamal Crawford missed a three at the buzzer.

The clutch three was one of four Redick hit on the night. He finished with 21 points off the bench and has been one of the League’s best reserves this season. Arron Afflalo was great with 30 points, 7 boards and 7 dimes. He made 3-of-3 from deep and 7-of-8 from the stripe. Nikola Vucevic was big again with 18 points and 15 boards. The Magic should have done about 14 times better than they did in the Dwight Howard trade, but Vucevic’s success softens the blow a little bit.

Blake Griffin led the Clippers with 30. Chris Paul handed out 16 assists while committing just 2 turnovers. He couldn’t get his shot to fall, though, connecting on just 4-of-11 shots. Crawford made just 4-of-12 shots and Eric Bledsoe was uncharacteristically silent, hitting just 1-of-4 attempts from the field.

The Wizards needed him back desperately, and while it’s obviously too late to save this season, having him play about 50 games alongside rookie Bradley Beal (16 points, 3 steals) should show plenty of promise for the future.

Al Horford double-doubled for Atlanta. Josh Smith made only 4 of his 13 shots from the floor, and finished with 11 points, 8 boards and 4 dimes.

Jrue Holiday led the Sixers with 30 points. He added 9 dimes and 4 steals, and has been playing at an all-star level all season. Thaddeus Young went for 18 and 12. Evan Turner added 12 points, 7 boards and 6 dimes.

James Harden was Houston’s high-man with 29. He made 10-of-19 shots and 7-of-8 free throws. He also grabbed 8 boards and dished out 6 assists. Chandler Parsons, who’s shaping into a reliable player on a playoff-caliber team, scored 23 points despite making only 1-of-7 attempts from deep. Omer Asik went for 16 and 10.

Jazz (20-19) 90, Pistons (14-24) 87
The Pistons nearly made an amazing comeback last night. They trailed by double-figures with under three minutes left, but a late 12-2 run gave them a chance. They trailed by three with four seconds left, but Brandon Knight missed a trey that would have sent the game into overtime.

Al Jefferson led the game with 20 and 10 for Utah. Both Paul Millsap and Randy Foye dropped 17, and Alec Burks added 12 off the bench.

Knight made 7-of-16 shots (2-of-7 from three), and finished with 16 points. Greg Monroe double-doubled, but committed 7 turnovers and didn’t attempt a free throw. Will Bynum made 6-of-6 shots off the bench, and scored 13 points in 19 minutes.

Suns (13-26) 97, Bulls (20-15) 81
One night after controlling a game in Madison Square Garden, the Bulls got crushed by the Suns at home. Phoenix owned the second and third quarters, and didn’t allow Chicago to come back in the fourth. Luis Scola led the team with 22 points, and Michael Beasley woke up with 20 points in 21 minutes off the bench.

Both Carlos Boozer and Joakim Noah both double-doubled for Chicago. Jimmy Butler added 13 off the bench, and has been pretty productive for the Bulls in a limited role this season.

Mavericks (15-23) 104, Grizzlies (24-11) 83
Memphis picked up a huge OT win against the Spurs on Friday, but were terrible on Saturday in Dallas. They lost by at least seven points in each of the first three quarters.

Dirk Nowitzki was efficient for Dallas, making 5-of-8 shots for 17 points. He’s starting to find his groove having scored at least 15 points in six straight games. Shawn Marion was the team’s high-scorer with 20, and added 7 boards. The Mavs connected on an outstanding 11-of-17 threes.

Sacramento played a horrible game, save for Isaiah Thomas (34 points, 6 threes). DeMarcus Cousins made only 4-of-11 shots, and Jason Thompson, John Salmons and Francisco Garcia—all starters—combined for five points.

Even with the win, the Heat are just .500 on the road this year.