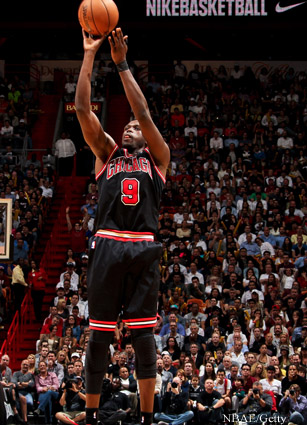 After a tough ’11-’12 season had Bulls fans calling for Carlos Boozer’s head, the power forward has really turned things around and is giving Chicago their money’s worth. In last night’s tough overtime win, Boozer finished with 36 points and 12 rebounds–good enough for his Eastern Conference leading 21st double-double. Chicago led by four with just over a minute left in regulation when Nate Robinson fouled Kyle Lowry (26 points, 7 assists, 5 boards) on a three-point attempt. Lowry hit two of three free throws to cut the lead to two. Marco Belinelli (10 points) was fouled on the next possession and hit one of two free throws to put the Bulls back up three but Lowry went in for a layup on the next possession to make it a one-point game with under a minute to play. Belinelli then missed a layup to give the Raptors the ball back, but Lowry missed a jumper. Fortunately for Toronto, Amir Johnson was fouled while grabbing the rebound and went to the line where he hit one of two to force overtime. In the extra session, the two teams were tied up at 105 when Luol Deng (19 points, 7 dimes, 6 boards) hit what turned out to be the game winner over Landry Fields with three seconds left. Joakim Noah finished with 16 points and 14 boards.

The struggling Magic got a surprise double-digit win over the Pacers last night in Orlando. As a team, the Magic hit 12 three-pointers while shooting 57 percent from behind the arc. The Pacers, on the other hand, hit just two three balls and shot a putrid 11 percent from long distance. The Magic led by as many as 22 points before Indiana cut it to 13 early in the fourth quarter. But Orlando quickly ended Indiana’s hopes of a comeback with a 10-4 run to push the lead back to 19 and the game out of hand. Nikola Vucevic led the Magic with 16 points and 15 boards  while J.J. Redick and Jameer Nelson each chipped in with 14 points and 6 dimes. Paul George led the Pacers with 20 points, 10 boards and 4 assists.

With Josh Smith sitting out due to a team enforced suspension, Jeff Teague picked up the slack and finished with a career-high 28 points to go along with 11 dimes as the Hawks ended the Nets’ seven-game winning streak. The Hawks, who had lost six of their last seven, took a 16-point lead into the half and led by as many as 26 in the third. The Nets never had a chance as they trailed wire-to-wire. Zaza Pachulia finished two assists shy of a triple-double 13 points, 11 boards and 8 dimes, Devin Harris scored 18 and Al Horford notched a 17-point, 13-rebound double-double. Brook Lopez led the Nets with 22 points and 9 rebounds.

Doc Rivers faced his son for the first time in his NBA career and the younger Rivers walked away the victor. While Rivers only scored 8 points off the bench, his teammates did more than enough for New Orleans to get the victory. Greivis Vasquez continued his outstanding play with 15 points and 11 assists and Al-Farouq Aminu played a great game, scoring 18 points (12-13 from the stripe) while grabbing 9 boards. The Celtics opened the contest on a 21-10 run but the Hornets calmed down and came back to take a one-point lead at the half. The Hornets continued to build on their lead and led by nine early in the third quarter. The C’s crawled back into the game and trailed by four heading into the fourth but went ice cold in the final frame. Boston failed to hit a shot from the 6:22 mark until two minutes left in the game and before the C’s knew what happened, they were down by 16 and the game was out of reach. Kevin Garnett led the Celtics with 15 and Rajon Rondo dropped 11 dimes.

The Thunder are too tough right now and made light work of a Nuggets team playing on the second night of a back-to-back. OKC led wire-to-wire and pummeled the Nuggets, leading by as many as 28 and snapping their six-game winning streak. Russell Westbrook led all scorers with 32 points, Kevin Martin scored 20 off the bench and Kevin Durant chipped in with a light 20 to go along with a career-high tying 5 steals. The Thunder rested their starters for the fourth quarter. Kosta Koufos led the Nuggets with 16 points and 9 boards.

Up by 11 heading into the fourth, the Mavs felt confident that they were going to get an easy win over their in-state rival. Instead, Houston went on a 15-4 fourth quarter run to tie the score at 97 to make a game out of it. With the score tied late, Dirk did what he has done so many times over his career: takeover. Nowitzki scored 10 of his team-high 19 points in the quarter and showed flashes of brilliance as he continues to recover from knee surgery. Nowitzki’s teammates turned up the pressure defensively, getting big stops in the final minute to end Houston’s rally. First Elton Brand (11 points, 10 boards) blocked a James Harden (20 points, 8 boards, 7 dimes) layup then Dahntay Jones intercepted a Jeremy Lin (19 points) pass. Nowitzki, Jones and O.J. Mayo (18 points, 8 dimes, 6 boards) each hit a pair of free throws in the final 25 seconds to put this one to bed.

The Spurs used a huge second quarter to propel them to an easy victory over the Grizzlies. San Antonio were down by as many as eight in the first but in the second, the team shot 80 percent from the field and outscored Memphis 38-29. In the second half, the Spurs turned it up defensively, holding the Grizzlies to just 28 points to cruise to an easy victory. Tim Duncan scored 19 points and grabbed 8 boards, Tony Parker scored 17 and dropped 11 dimes and Kawhi Leonard scored 13. Rudy Gay led the Grizz with 17 points and 8 boards.

Boogie Cousins scored 21 points and grabbed 16 boards, Tyreke Evans tallied 21 points, 8 dimes and 8 boards and John Salmons chipped in with 21 off the bench as the Kings won a close one over the Wizards. The game was neck and neck throughout and came down to free throws between the two former John Calipari coached point guards (Evans and John Wall). In college, free throws were the achilles heel for both players and it cost Wall another victory. With 30 seconds left and the game knotted at 94, Wall stepped to the stripe and bricked two free throws. On the other end, Evans sealed the deal by hitting one of two. Wall finished with 14 points and 10 dimes while rookie Brad Beal scored a career-high 26 points.

The Blazers lost but J.J. Hickson did this…

The Heat crushed the Warriors in Golden State last night but the real story of this game was LeBron scoring the 20,000th point of his career. At the young age of 28, he is the youngest player in NBA history to reach that impressive milestone. Salute and here’s hoping for another 20,000.