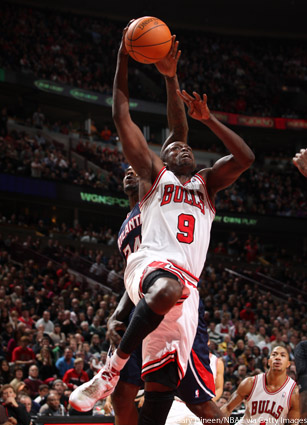 Sometimes you look at a box score and the numbers are eye-popping (see: Lakers-Rockets) while other times, watching the final play of a game can convince you that not a single stat mattered (see: Bulls-Hawks). And, sometimes, there’s Jazz-Bucks. Away we go!

Cleveland’s future was on display at the Q last night, as the Cavs got big-time performances from their two top-five picks in a win over Charlotte. Kyrie Irving tied a career-high with 20 points on 8-of-10 shooting and 6 assists without a single turnover (plus 2 blocks, one of which came in impressive fashion), and Tristan Thompson scored a career high 16 points and had 9 rebounds. The Cavaliers are .500 for he first time since Nov. 9, 2010, when they were 4-3. (Side note: the Wizards haven’t been .500 or better since Halloween 2009.) Cleveland shot 50 percent from the field as a team and made 10 threes, while holding the Bobcats prized rookie, Kemba Walker, to just 2 points on 1-6 shooting. DJ Augustin was the leading scorer for Charlotte, with 26 points and 9 assists. Augustin is quietly having a very nice start to the year, scoring when called upon and setting up teammates while fighting off Walker’s surge for playing time—check out this dish from DJ.

A night after the Hawks handed Miami its first loss of the season, Atlanta’s matchup with the Bulls lived up to the billing. With the game hanging in the balance, Chicago wanted to get the ball to Derrick Rose (30 points, 7 assists) but instead found Luol Deng under the hoop for a game-winning layup with 3.7 seconds left. In a tie ballgame, Joakim Noah called an audible mid-play and found Deng on a backdoor cut that was enough beat the Hawks, after Joe Johnson threw up an airball at the buzzer. Deng had 21 points for the game, including eight points in the final four minutes, and also had 8 rebounds. The Bulls won despite shooting 34 percent from the field and 4-17 from three. The Hawks’ percentages weren’t much better (FG: 35 percent, 3PT: 4-15), but ATL held a hefty 38-26 lead at the half before Rose led a second-half charge. Josh Smith had a double-double with 15 points and 14 rebounds, and Al Horford led the Hawks in scoring with 16.

There is only 1 team in the Western Conference with just 1 loss, and it’s the Blazers. After beating Oklahoma City behind 30 points from LaMarcus Aldridge, Portland sits atop the West, yanking that honor from the Thunder. Portland held OKC to just 40 points and 34 percent shooting in the second half, and held Kevin Durant to 8-of-26 shooting for the game (19 points). And after two games with an astonishing 46 total turnovers, the Blazers turned it over just 9 times. Gerald Wallace scored 13 points and had 10 rebounds and Wes Mathews scored 16 points for Rip City, while the Thunder were led by 23 points from James Harden, who got his first start of the season while Thabo Sefolosha battled the flu.

Last time out, Memphis got spanked by the Bulls, so last night they came out firing against a friendly opponent in the Kings. The Grizz were without Zach Randolph, but Mike Conley returned from an ankle injury and had 14 points, 7 assists and 4 steals in 23 minutes of the bench to spark Memphis, while Rudy Gay poured in 23 points on 10-16 field goal shooting. Oh, and he threw the hammer down, too. DeMarcus Cousins returned to the Kings rotation—continuing one of the season’s weirdest sagas so far—and had 8 rebounds but just 4 points on 1-5 shots in 22 bench minutes. The scoring leaders for Sacramento were two rookies: Isaiah Thomas (15 points in 16 minutes) and Jimmer Fredette (17 points in 29 minutes), while JJ Hickson (12 points) was the only starter to score in double figures for the Kings, who remain winless on the road.

Milwaukee was without Andrew Bogut for “personal reasons” and also Mike Dunleavy and Beno Udrih with various injuries, and with Bogut not patrolling the paint, Al Jefferson scored 26 points and grabbed 10 boards to lead Utah back to .500 for the season. Apparently, when Jefferson heard Bogut wasn’t going to play, he said “Thank God!” While that’s simultaneously hilarious and awesome, he has been bothered by Bogut in the past, so give dude a break. At least he delivered. Once I tell you that Drew Gooden was the Bucks’ leading scorer, you’ll know why they lost. Gooden had 24 points and 12 boards. Unfortunately, that’s not a winning formula, and not only that but the rest of the Milwaukee roster decided to take the night off with Bogut, Dunleavy and Udrih. In 44 minutes, Brandon Jennings shot 4-for-19, 0-for-7 from three-point range and finished with 8 points. The team numbers weren’t much better: 31 percent shooting, 2-21 from deep.

The Lakers shot 53 percent as a team, and got a pair of monster performances from Andrew Bynum and Kobe Bryant, who both played 37+ minutes. I promised you the stats, so here they are—Kobe: 37 points (on 29 shots), 8 rebounds, 6 assists, only 2 turnovers, and Bynum: 21 points, 23 boards, 3 blocks. Bynum had 23 rebounds, and the Rockets had 36 for the game for the entire team. By halftime, Kobe had 15 points on 5-of-14 shooting, 5 rebounds and 3 assists, and he scored 7 consecutive points in the fourth quarter to put away the Rockets. The Lakers also held Houston scoreless for almost six minutes in the final period. For his part, Kyle Lowry had a big-time game, flirting with a triple-double at 22 points, 10 rebounds, 9 assists—the guy is a fantasy basketball beast, book it.

Moment of the Night: Noah finds Deng and the Bulls beat the Hawks in Chicago.

Kobe of the Night: I swear this is a travel, but then again, it’s pretty fresh.

Tonight: 12 games in all on Wednesday night, highlighted by Indiana at Miami and an NBATV doubleheader: first it’s Javale McGee vs. Dwight Howard as my Wizards head down to Orlando, then the Rockets are in Lob City to take on CP3, Blake and company. Meet you back here in the morning.