Draymond Green notched his second straight triple-double, while the Pacers and Pistons renewed their rivalry. 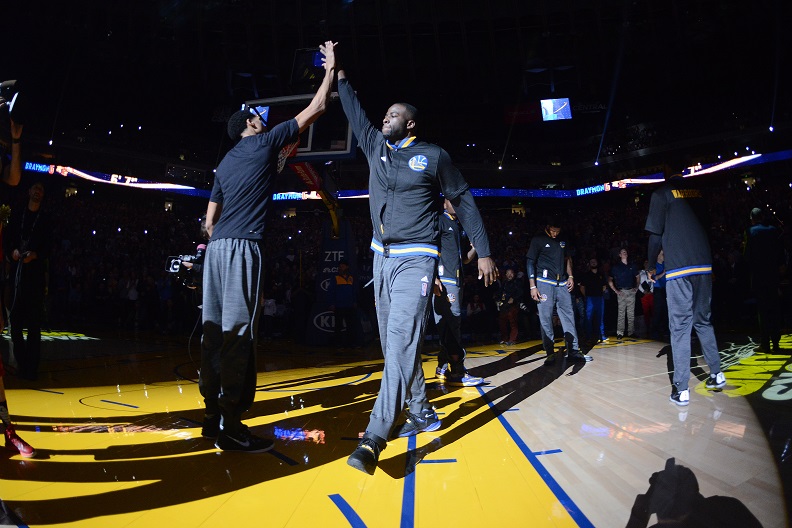 An incredible triple-double performance from Draymond Green helped decide Golden State’s thrilling overtime victory Saturday. Will Barton, who has emerged as a bonafide offensive threat after averaging just 6.8 points last season, sent Denver to OT with a slick lay-in before time expired. Despite the victory, and Green’s remarkable play, the focus will now shift to Stephen Curry’s health. Curry, one half of the Splash Brothers, departed the game at halftime with a left shin contusion.

Brook Lopez’s excellent performance this season has largely flown under the radar. Playing for a non-contending team, Lopez has now averaged 26.7 points with 13.3 boards over his last three games. Lopez and Joe Johnson’s combined 50 points helped Brooklyn hold off Isaiah Thomas (24 points) and the Celtics for their second victory of a three-game road trip. In what was a recurring theme Saturday, tempers flared after Jared Sullinger delivered a hard foul on Lopez.

Whereas the Kings were able to snap a three-game losing streak in impressive fashion, the Suns continued their descent to the bottom of the Western Conference. Losing Tyson Chandler to an ejection in the third quarter, Phoenix had trouble containing Boogie Cousins in their eighth-straight defeat.

A post-game scuffle overshadowed what was a brilliant performance from Paul George. Scoring 32 points with 14 boards, George guided Indiana to combined a 45.2 field goal percentage. On the Pistons’ end, it wasn’t just Marcus Morris who was unhappy with the game’s turnout- an irate Stan Van Gundy was ejected after a perceived no-call with under a minute remaining.

Kevin Durant (29 points) and Kemba Walker (32 points) treated fans to an offensive duel in an entertaining match-up. OKC pulled away with a 22-14 run in the fourth quarter, while the Nicolas Batum-less Hornets received a paltry 29.1 field goal percentage from the bench.

Despite entering Saturday’s game feeling “under the weather”, LeBron James turned in one of his best performances of the season, posting 29 points with five boards against the Magic. Cleveland’s scoring output reached a fever pitch when Timofey Mozgov dropped the hammer on Nikola Vucevic in the second quarter.

Thanks to a double-double from Greg Monroe and 15 points from John Henson, the Bucks were able to notch their second straight victory. The T’Wolves received some entertainment in the form of a Zach LaVine alley-oop, but managed just 38 second-half points.

The Bucks received an unwelcome distraction when O.J. Mayo was ejected, and subsequently restrained by coaches in the first quarter. Mayo, who raised eyebrows by calling Draymond Green “not a class act” after a Dec. 19 game, apologized for his actions.

“It was a poor decision on my end to definitely disrespect the game,” Mayo said. “Poor decision of mine to misrepresent the Bucks, myself, my family, obviously my teammates.”

Nerlens Noel and Jahlil Okafor combined for 36 points, but otherwise this contest was all Clippers. Austin Rivers scored 26 points off the bench, while DeAndre Jordan torched Philly’s front-court for an unfathomable nine dunks.

The Pelicans made due without Tyreke Evans, receiving a 31-point effort from Anthony Davis and 20 points from Jrue Holliday. Norris Cole made efficient use of his spot-start, notching a double-double with 16 points and 12 boards over 38 minutes. The Mavericks are hoping for Deron Williams to make a speedy recovery — the former Net sat out the fourth quarter with a hamstring injury.

Legendary big man Tim Duncan earned an unusual distinction Saturday night; being held scoreless for the first time in his 1,360 game NBA career. Thankfully, LaMarcus Aldridge, Kawhi Leonard, and Boris Diaw were able to pick up the offensive slack, scoring at least 20 points each. His team may have come up short, but Dwight Howard has looked like his old self recently. The eight-time All-Star has posted double-doubles with at least 20 points in each of his last three games.

Thanks to a career-high 32 points from Rodney Hood, the Jazz were able to eke out an overtime victory against a resilient Grizzlies team. With Derrick Favors banged up, and Alec Burks presumed out for weeks with a fractured fibula, Hood may shoulder Utah’s offensive load for the time being.