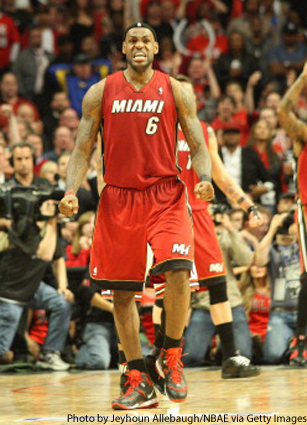 If it was surreal watching the final three minutes and change of Game 5 unfold from the comforts of your living room, imagine watching it in the company of 23,000+ people. The best way to describe what happened at the United Center last night it is the NBA talking all commercial, the one with Charlie Murphy doing the voiceover telling the story of Derek Fisher’s miraculous Playoff shot against the Spurs. It was the exact same thing.

The Bulls led the Heat by 12 points with just over three minutes to go in regulation when LeBron James, Dwyane Wade—who struggled all game—and Chris Bosh took over and stole what seemed to be a sure-fire trip back to Miami for Game 6.

While most Bulls fans will blame the loss on poor officiating (Miami took 9 FT’s in a two-minute span late in the final quarter), credit goes to the Heat for stepping it up on the defensive end, but more importantly, for making big shots in critical moments. Whether it was Bosh hitting a baseline jumper while being guarded by two defenders or making two huge, late FT’s; or Dwyane Wade driving to the lane and converting time and again or getting fouled by Derrick Rose to earn a 4-point play opportunity; or LeBron James once again hitting big shot after big shot, shaking the criticism that he isn’t a closer by once again proving that he clearly is. All of these things buried Chicago and helped Miami advance to the NBA Finals for the opportunity to face the Dallas Mavericks.

As disappointing as the loss was for all of Chicago, what stings is they way that they were defeated and who it came at the hands of. Still, the team had a season that no one expected them to have.

Derrick Rose will receive the bulk of the blame today for this loss and the Bulls’ failure in the postseason, but that comes with the territory of being an NBA superstar. But say what you want about him, it can’t be denied or argued that DRose and his stellar play this season are the real reason they even made it this far, and at 22-years-old, he’s the reason Bulls fans can feel confident that this isn’t the last time this team will be in this position. —Bryan Crawford (@_bryancrawford)