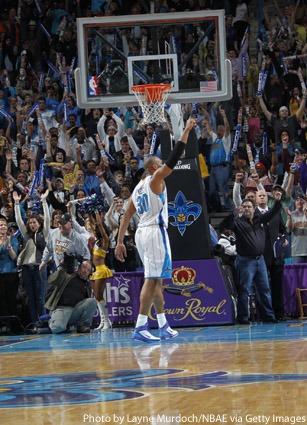 As we reported yesterday, it didn’t cost much for those who wanted to make the trek to Newark to check out this battle between Eastern Conference bottom feeders. The few actually in attendance did get a decent show, though, with these two going back-and-forth right until the final buzzer. After a Joey Graham three-pointer tied things up, Nets center Brook Lopez took matters into his own hands, sinking the game-winning jumper from six feet out with little time left on the clock. Bropez scored 28 in the win, a game which also provided the Cavs with their 17th straight loss. If nothing else, I think it’s safe to say this one was well worth the price of admission. Yeah, that’s just a cheap shot. Wait, so was that. Let’s move on.

Using strong interior play (the 76ers out-rebounded the Suns 41-32), efficient shooting (Philly shot 54.3 from the floor, 100 percent from the line) and a huge second quarter, the Sixers defeated Phoenix at home. Thaddeus Young and Elton Brand combined for 46 points and 16 boards, while Evan Turner and Lou Williams dropped 14 points apiece. Jared Dudley led the Suns with 23, and Steve Nash (free this man, someone) scored 17 and dished 9.

You know what people haven’t been complaining about as of late? That massive contract Rudy Gay was given over the summer. And for good reason, because dude is doing all he can to continue to earn those digits. He continued to do so last night, hitting a jumper with only a second or so left on the clock to give the Grizz the lead, then making a block on the defensive end as time expired to give ’em the win. Andrea Bargnani scored a game-high 29 points, while Jerryd Bayless put up a 15-8-11 line that had him shockingly close to a triple-double. But the Raptors also shot 0-13 from three-point land, which isn’t a very good look for a professional basketball team. They’ve now dropped eight straight.

Say what you’d like about the Pistons, but when things are going well, they do have the talent to put together a win against just about anybody. Last night, anybody was the Magic, who were shocked at home by the visitors. With Rip Hamilton furious at coach John Kuester and responding by sitting out, the rest of the guys stepped up, as Tracy McGrady, Tayshaun Prince and Austin Daye each scored a cool 20. Dwight Howard got the numbers (20 points, 16 boards), but not the help, though I don’t think folks in Orlando will have too much to worry about after this upset. The Magic got caught off guard, and if they’re a true contender, they’ll learn how to rebound and make sure it doesn’t happen again.

The Knicks had a rough couple of weeks, but a home game against the Wizards—who have yet to win away from DC—is always a strong way to get back on track. Things were pretty close for the majority of the 48 minutes, but NY broke away in the final quarter to earn the victory. Amar’e Stoudemire led the way with 30 points, while Raymond Felton, who appears to be the wheels that make the Knicks move forward, scored 17, distributed 15 and swiped 4. The Wiz are now 0-21 away from home, and they’ll play one more home contest against the Nuggets tonight before heading out with the intentions of seeing some road success.

When Joakim Noah went down for an extended period of time, we knew the Bulls bench would need to step up and cover the lost energy. What we didn’t know was that said assistance would come from 38-year-old Kurt Thomas, but, yeah: That’s how it’s going down. Thomas led the Bulls with 22 points last night, as they smoothly handled the Bucks at home. Chris Douglas-Roberts dropped a game-high 30, though it wasn’t enough. Come back soon, Brandon Jennings—these guys are missing you more and more.

Probably yesterday’s most exciting dogfight right here. The young Thunder went up against the surging Hornets, and in front of a wild crowd (that included Samuel L. Jackson, naturally), New Orleans came through in the clutch and squeaked out the W. With the final quarter’s last few ticks approaching zero and the game all tied up, David West squared up over Serge Ibaka, sinking a jumper with barely any time remaining for a retaliation attempt. (That makes three game-winners on the night, for those of you counting at home.) The Hornets are now officially the League’s hottest team, winning nine in a row and defeating some strong opponents during the streak. Did I mention that SLAM 145, featuring cover star CP3, is on sale now? No? OK then.

Plenty of buckets, not so much defense. Behind Kevin Martin’s 34, the Rockets won in Minnesota, piling on a barrage of scoring that began with a 39-point first quarter. Needing a three late, the TWolves couldn’t convert, as Kevin Love’s attempt was way off and Minny fell short, once again. Love had 24 and 17, which has (incredibly) become a relatively standard performance.

Five Kings (yeah, that sounds like a bad action movie) scored in double figures last night, and the well-balanced Sacramento offense took down the Blazers with an efficient (as in: 50 percent from the field) effort. ‘Reke Evans led the way with 26 (plus 6 dimes and 6 boards), while Wesley Matthews led the defeated squad with 21. The L ended a five-game winning streak for Portland, and also ended a four-game losing for the Kings. In other words, if you successfully betted on a Sacto victory, props.

All due respect to the game above, but two West Coast upsets was a little too much to expect. The biggest story to come out of this one was, fortunately, a non-story, as Tim Duncan went down hard  in the second quarter, left the game, but returned later in the contest. The Spurs easily won this high-scoring affair, getting their standard across-the-board offensive production from both the starters and the bench. For the Warriors, David Lee…wait! Here you go:

Moment of the Night: Three game-winners, all of which you’ll probably see pop up on this site at some point today. This was, in my humble little opinion, the most exciting of the bunch: