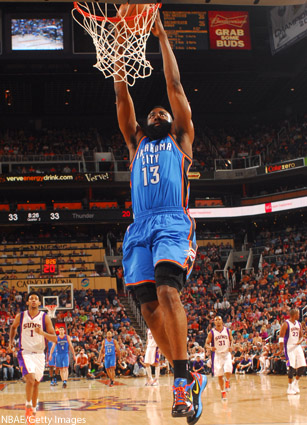 14 games? You serious? Just when we were beginning to forget about that damn lockout…14 games! That means 28 of the L’s 30 teams were in action last night. What, couldn’t get the Wolves and Pacers out there, too, Commish? Anyway, given the insane schedule, and the fact that I was either on Press Row or traveling back and forth for Nets-Knicks until midnight, you’ll have to adjust your eyes to a re-formatted Post Up. Go ahead and use the comments section to help us all sort out what the heck happened last night.

Milwaukee’s hopes of grabbing the No. 8 seed from Philadelphia got off to a rough start, as the Bucks lost to the lowly Wizards and the Sixers blew out the Cavaliers in Kyrie Irving’s return to action. Jrue Holiday scored 19 points in what literally might have been a season-saving third quarter, during which Philly ripped off a 24-2 run to break a 57-57 tie and take care of the pesky Cavaliers. Meanwhile in the nation’s capital, Jordan Crawford went off for 32 points and John Wall had 14 points and 10 assists as the anti-tanking Wizards handed the Bucks an embarrassing L. Coach Scott Skiles described it as the “wrong time to have a bad game.” Uh, yeah, Scott. Luckily for Milwaukee—now 2.5 games back of a Playoff spot—one final head-to-head matchup with the Sixers next week offers a chance to make up some of the ground lost on Wednesday night.

I call this “awesome Eastern Conference teams beating the crap out of terrible Eastern Conference teams.” Rip Hamilton went, well, Ham on the Bobcats, dropping 22 points after starting out 7-7 from the field and 4-4 from deep. Charlotte, on the other hand, shot an abysmal 20.7 percent. For the entire game. (Side note: I’d bet a life supply of SLAM swag that Michael Jordan wouldn’t shoot that badly if he suited up right now. Make it happen, Mike.) The Heat couldn’t let the Bulls have all the fun, so LeBron James scored 28 points on 12-15 shooting and Miami held the Raptors to just 23 points in the second half, tying a team-low for a half of basketball. Oh, and Dwyane Wade and Chris Bosh weren’t even playing. At this point, I’m ready for the ECF…Lastly, peep the nice dime from LBJ:

This is the one game I know everything about. Ask me anything, ANYTHING! Carmelo Anthony was simply en fuego (“on fire” in Spanish, fellas) in the first quarter, pouring in 21 points before any of the mostly Knicks fans in attendance could blink. He finished with 33, Tyson Chandler man-handled the under-sized Nets, and JR Smith and Steve Novak had 3-point cameos in the second half as the Knicks won the last-ever Nets-Knicks game to be played in New Jersey. Get ready for Hump-mania, Brooklyn! To get the rest of the story, hit my recap on NBA.com here.

T-Mac back? Tracy McGrady led all scorers with 17 points, 4 boards and 4 rebounds in only 17 minutes as the Hawks blew out the Pistons. Should I go on my Greg Monroe rant one last time before the season’s out? Okay, fine, I will—he had 17 points and 5 rebounds and the Pistons still lost by 32. How can Monroe even high-five dudes like Austin Daye, Ben Gordon and Rodney Stuckey after this game? Daye was 1-11, Gordon 3-11 and Stuckey was 0-3 with zero points in his 21 minutes.

Rudy Gay scored 13 of his 26 points in the third quarter, and the Grizzlies outscored the Hornets 37-12 in the third to break open the game and clinch a Playoff spot for Memphis. It was a team effort for the Grizz, who shot 51 percent from the floor and dominated down low, winning the “points in the paint” battle 56 to 34. A shred of upside for the Hornets was that rookie Jerome Dyson led NOLA in scoring with a career-high 24 points. Good for Dyson, who paid his dues in the D-League the past two season before getting the call-up.

Orlando cut a 4-point Boston lead in half on a Glen Davis steal-and-dunk with 30 seconds left, but Big Baby caught switched off on Paul Pierce on the very next possession, and The Truth delivered a vintage step-back jumper to put the Celtics up by 4, sealing the deal on the ailing Magic. Davis, the former Celtic, scored 27 points, but Pierce one-upped him with 29 points, 5 rebounds and a career-high 14 assists. Avery Bradley and Brandon Bass combined for 44 points, and from the DNP section: Rajon Rondo and Dwight Howard sat out, with differing levels of back pain, while Ray Allen had the night off, too.

It was a frantic pace (17 turnovers each, 49 fouls combined) with loose balls changing hands on every rebound and Blake Griffin boinking another would-be Dunk of the Night. But let’s fast-forward to crunch time:

That’s right, on a night when Chris Paul led the Clippers with 21 points and 8 dimes, it was ex-Nugget Kenyon Martin who made a pair of game-winning plays on back-to-back possessions—one offensive, one defensive. CP3 cashed some free throws and Lob City escaped with a wild win.

Trying to sort out the total mess that is the back end of the Western Conference Playoff race is going to be a nightly chore from now on. Houston, Phoenix and Utah are all currently fighting for the 8-seed, and after last night’s results, the Jazz (33-30) has a half-game lead over the Suns and Rockets (both 32-30). That follows, since Utah was the only one of the 3 teams to pick up a win last night. Then again, the Jazz were facing the least resistant opponent, too—Devin Harris scored 25 of his game-high 27 points in the first half as Utah built a double-digit lead and cruised to a win over the bumbling Blazers. Phoenix and Houston both ran up against monster games from opposing stars. In Dallas, Dirk Nowitzki scored 31 of his 35 points in the second half and the Mavs closed out the Rocks with 39-point fourth quarter. And in Phoenix, James Harden put on an absolute show—actually, it was more like a clinic on efficiency (shout out to the NERD rankings!). The Bearded Wonder had himself a Hardy Party, scoring a career-high 40 points on 12-17 field goal shooting (5 threes), 11-11 free throw shooting and still found time to grab 7 rebounds, drop 3 dimes and get 4 steals. Playoff beards, anyone?

That’s 5 straight for the perpetually underrated slash first-place Spurs, who shot 59 percent and had 7 players score in double figures against Sacramento last night. Tony Parker had 15 points and 8 assists, and San Antonio’s bench outscored the Kings’ reserves by a 71-28 margin. Isaiah Thomas led the Kings with 21 points and 8 dimes, none sweeter than this no-looker on the break:

The Lakers once wanted to trade Pau Gasol. He cares not. Last night, the veteran big man’s well-rounded game was on display, as he recorded a triple-double (22 points, 11 rebounds and 11 assists) while helping the Lakers mount a 17-point advantage by the second quarter en route to an easy win over new-Western Conference pinching bag Golden State. Andrew Bynum had 31 points and 9 rebounds as Los Angeles won again, with Kobe Bryant sitting out a 7th straight game. Also, can someone please explain to me how in the world the Warriors got on national television so much this season? At this point, there’s barely anything redeeming happening in Golden State, as they’re content to “rest” Steph Curry, Andrew Bogut and David Lee the rest of the year.

Dunk of the Night: Joakim Noah on the Bobcats. Because Charlotte hasn’t been made fun of enough.

Tonight: Bulls-Heat and Clippers-Suns on TNT highlight a 5-game schedule.